The court of appeals decided State v. Shelton, ___ N.C. App. ___ (2019) yesterday, determining that the evidence of the defendant’s impairment was sufficient when he took impairing drugs hours before crashing his vehicle into a pedestrian after his brakes failed. Two aspects of the case are of particular interest: (1) the court’s evaluation of the sufficiency of the evidence in a case where no one opined that the defendant was impaired; and (2) how the State obtained evidence that drugs remained in the defendant’s system in the first place. 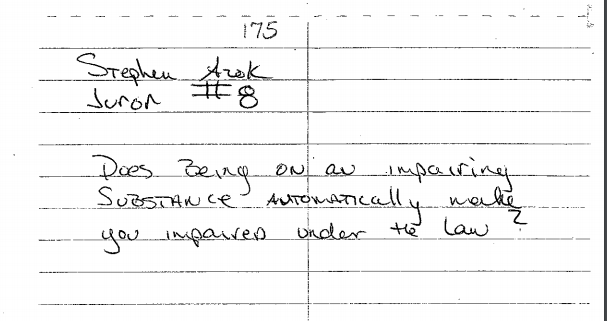 The morning of. When he awoke at 6:30 a.m. on July 22, 2015, Brian Shelton took his prescription oxycodone. He then drove his pickup truck from his home in Sneads Ferry to his job in Surf City. At 11 a.m., Shelton took tramadol, another drug that he had been prescribed. Both drugs had been prescribed with labels warning of their potential to cause drowsiness and dizziness and advising that care be taken when operating a vehicle.

The crash. As Shelton was driving home from work at 5:10 p.m., the sports utility vehicle (SUV) in front of him slowed to make a left turn. Shelton applied his brakes, but they failed. Shelton swerved to the right to avoid hitting the SUV and ran off the road. As he did so, he struck and killed Rhonda Anderson who had been standing near a group of mailboxes about three feet from the side of the road. The force of the impact caused Anderson’s body to fly nearly 20 yards through the air before hitting the ground. Shelton’s truck also hit the rear of the turning car, ripping off Shelton’s driver’s side mirror.

Shelton was apparently unaware that his truck had struck Anderson. He did realize, however, that he had been in a crash, and he also knew that he was driving with a revoked license. He left the scene and drove home, using the emergency brakes on his truck to bring it to a stop in his driveway.

The initial charges. A highway patrol trooper tracked Shelton down at his home at 6:45 p.m. Shelton spoke to the officer and wrote a written statement. He also submitted to a portable breath test that registered a 0.00. Later that evening, another trooper interviewed Shelton and informed him that he had struck and killed Anderson. The trooper cited Shelton for several offenses arising out of the accident, including misdemeanor death by vehicle and felony hit and run, but did not charge him with driving while impaired. Another trooper obtained a search warrant for Shelton’s blood, which he executed around 11 p.m. the evening of the crash. (More on that later.)

The blood test. The State Crime Lab analyzed Shelton’s blood and confirmed the presence of oxycodone and tramadol. The laboratory analyst determined that these drugs were present in at least the amount of 25 nanograms per milliliter– the lab’s detection limits – but did not determine the precise amounts of these substances or whether Shelton was impaired by them at the time of the crash.

The trial. An expert pharmacologist called by Shelton testified that he would not expect to see impairment from a person who had 25 nanograms per milliliter of both substances in his bloodstream and that people who frequently take oxycodone and tramadol develop “’a great deal of tolerance’” to the drugs. Slip op. at 8. Shelton moved to dismiss at the close of the State’s evidence and again at the close of all the evidence. The trial court denied the motions.

The appeal. Shelton appealed, arguing in part that the trial court erred by denying his motion to dismiss the charge of felony death by vehicle.

Felony death by vehicle. A person commits the offense of felony death by vehicle if he drives while impaired and proximately causes the death of another person. Thus, there were two significant issues at Shelton’s trial: First, was he impaired? Second, if so, was that impairment the proximate cause of Anderson’s death?

Impairment. Shelton argued that there was no substantial evidence that he was impaired by oxycodone and/or tramadol at the time of the crash. He pointed out that the officers who met with him after the accident did not charge him with driving while impaired. The appellate court disagreed with Shelton’s assessment of the evidence, concluding that reasonable jurors could find that Shelton was impaired based on evidence that he consumed impairing drugs the day of the crash, evidence that those drugs were detected in Shelton’s blood after the crash and evidence regarding Shelton’s “lack of awareness of the circumstances around him and his conduct before and after the collision.” Slip op. at 12-13. The court noted that Shelton did not see Anderson standing on the side of the road whereas three eyewitnesses to the crash testified that they did see her before she was hit. Shelton also was unaware that he had struck Anderson, despite the force of the impact. And Shelton drove away from the scene in a vehicle that he knew lacked operable brakes.

Proximate cause. For Shelton to be convicted of felony death by vehicle, his impaired driving must have proximately caused Anderson’s death. To be the proximate cause of death, an act must have directly caused a death that was reasonably foreseeable under the circumstances. See State v. Pierce, 216 N.C. App. 377, 383 (2011).

Shelton argued that Anderson’s death was caused by the malfunctioning brakes on his truck and not by his alleged impaired driving. The appellate court reasoned that the two causes were not incompatible and that the faulty brakes did not preclude Shelton’s impaired driving from being a proximate cause. The court explained that the jury could have concluded that a non-impaired driver would have swerved left, as witnesses testified that there was no oncoming traffic, rather than swerving toward the side of the road where Anderson was standing.

Strict liability? Shelton argued that upholding his conviction for felony death by vehicle would create a strict liability standard for people who have consumed prescription drugs and are then involved in a crash caused by their negligent driving. Applied to different facts, some of the language in the court’s opinion supports such a concern. For example, the court states that “[t]he fact that a motorist has consumed impairing substances ‘when considered in connection with faulty driving or other conduct indicating an impairment of physical or mental faculties, is sufficient prima facie to show a violation of [G.S. 20-138.1].’” Slip op. at 12 (quoting State v. Norton, 213 N.C. App. 75, 79 (2011)). But elsewhere in the opinion, the court expresses a more nuanced view, stating that impairment may be shown through evidence that a defendant has “(1) ingested an impairing substance; and (2) operated his vehicle in a manner showing he was so oblivious to a visible risk of harm as to raise an inference that his senses were appreciably impaired.” Slip op. at 17. “[T]he circumstances of every case are different,” the court explained, “and not every accident involving a driver who has ingested prescription drugs will raise an inference that the driver was appreciably impaired.” Slip op. at 18.

What is missing. As I read Shelton, I wondered what the State asserted in the search warrant application for Shelton’s blood, given that the officers do not appear to have gathered evidence during their interactions with Shelton that suggested he was impaired. Shelton did not challenge the issuance of the search warrant on appeal, but the search warrant and the application therefor are contained in the record on appeal. As it turns out, the warrant was issued based on the following one-sentence statement: “[T]he defendant was involved in a motor vehicle collision where a violation of G.S. 20-141.4(a)(2) occurred.” (Record on Appeal at 11).

How could a search warrant issue based on a one-sentence statement that the defendant was involved in a collision where the offense of misdemeanor death by vehicle occurred?

G.S. 20-141.4(a)(2) sets forth the crime of misdemeanor death by vehicle, which is (1) unintentionally causing the death of another person, (2) while violating a State law or local ordinance applying to the operation or use of a vehicle or to the regulation of traffic—other than impaired driving under G.S. 20-138.1—where (3) commission of the offense is the proximate cause of the death.

Despite the fact that the offense by definition does not involve impaired driving, it was defined as an implied consent offense by S.L. 2011-119. That legislative change authorized the implied consent testing of a person charged with misdemeanor death by vehicle. See G.S. 20-139.1(b5).

Thus, relying on the statutes alone and ignoring potential constitutional concerns about a scheme that calls for chemical testing without probable cause to believe that the person has committed an alcohol or drug-related offense, the officers could have asked Shelton to submit to a blood test. Had they done so and Shelton refused, G.S. 20-139.1(b)(5) provides that “a law enforcement officer with probable cause to believe that the offense involved impaired driving or was an alcohol-related offense made subject to the procedures of G.S. 20-16.2 shall seek a warrant to obtain a blood sample.” (emphasis added). There is no statutory authorization (nor could there constitutionally be) for the issuance of a warrant to draw a defendant’s blood based simply on the commission of the offense of misdemeanor death by vehicle.

The warrant appears to me to have been improperly issued, but, again, that issue was not raised before the court.