The Administrative Office of the Courts has issued its most recent report on cost waivers to the General Assembly. This report covers the first full year of cost waiver data since the General Assembly’s amendment of G.S. 7A-304(a), requiring written notice and an opportunity to be heard for any government entity directly affected by a waiver. Let’s see if that change had an impact on waiver practices.

The latest report is available here. The AOC is required by G.S. 7A-350 to make this report to the legislature annually, noting all cases in which a judge makes a finding of just cause to grant a waiver of criminal court costs. The report must aggregate the waivers by the district in which the waivers were granted and by the name of each judge granting a waiver. The statute does not require the AOC to report on remissions, civil judgments, or anything to do with fines. But it does.

Within this year’s report, you can see some stark differences from district to district when it comes to criminal money matters. For example, some counties waive much more often than others. Some make heavy use of civil judgments, while others use them sparingly.

Comparing the report to previous years, what you’d see is that the number of cases in which money is ordered has remained pretty stable, but the number of waivers has dropped. And it looks like civil judgments might be serving as a substitute for waivers in some cases, because they are on the rise.

For those who prefer a graphic, this one shows how often the Ordered, Waived, and Civil Judgment statuses were used relative to one another over the past three years. 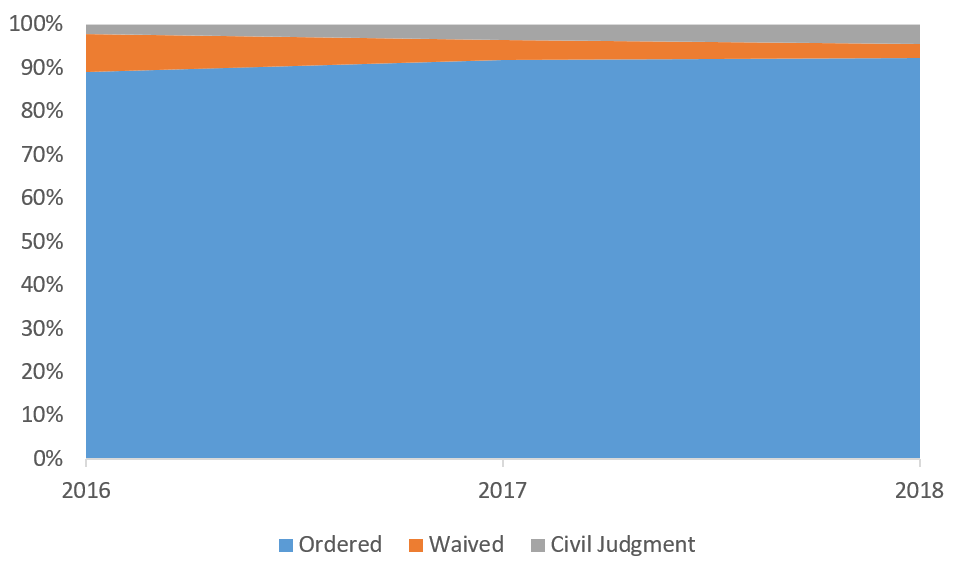 This year’s report notes that it uses a different methodology for coding cases in which multiple statuses were entered, and it therefore cautions against year-on-year comparisons. Still, looking at the previous reports as a whole, I think it’s fair to say that the default of costs being ordered still predominates, and waivers might be on the decline.

I sometimes hear judges say their hands are tied when it comes to court costs and other monetary obligations. I understand that. With the requirement for just cause findings, and written notice and an opportunity to be heard for affected government entities, waivers are certainly more administratively burdensome than they used to be. But they are always permissible (aside from the $60 attorney appointment fee). And it is error for a judge to operate under the impression that he or she lacks discretion to waive costs. State v. Patterson, 223 N.C. App. 180 (2012). The bench card available here attempts to make some sense of the complicated web of rules related to imposing and forgiving various monetary obligations.