Last week, Jamie blogged about the 2021 Structured Sentencing Statistical Report from the North Carolina Sentencing and Policy Advisory Commission. As Jamie noted, that report contains detailed information related to felony and misdemeanor sentences imposed in Fiscal Year 2021, including the most commonly used felony grid cell, the number of convictions by district, average probation length, and typical sentencing outcomes for the most charged offenses. Because that report analyzes felony and misdemeanor convictions and sentences imposed under the Structured Sentencing Act, it does not include information about one of the most commonly charged misdemeanors in North Carolina: driving while impaired, which is sentenced under the sentencing scheme set out in G.S. 20-179. The Sentencing and Policy Advisory Commission prepares a separate report each year analyzing those convictions, and the Driving While Impaired Convictions Statistical Report for Fiscal Year 2021 is available here. Read on for highlights from the report, which contains data about convictions under G.S. 20-179 from July 1, 2020 through June 30, 2021. 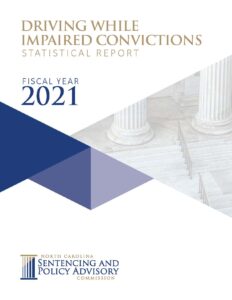 So what does the report tell us about those convictions?

Because the report analyzes data solely from convictions (and not charges), it does reflect the conviction rate or the method of disposition for DWI charges more generally. Statistics compiled by the Administrative Office of the Courts for the 2017 fiscal year reflect that 7 percent of the DWI dispositions that year were not guilty verdicts, 4 percent were magistrate findings of no probable cause, 22 percent were voluntary dismissals by the prosecutor, and 7 percent were dismissed with leave. [Convictions for Habitual Impaired Driving (G.S. 20-138.5) and aiding and abetting impaired driving (punished pursuant to G.S. 20-179(f1)) were included in the 2017 statistics but not in the report.] If dispositions in FY 2021 continued to break down along similar lines, most DWI charges (in addition to convictions) were disposed of by guilty plea rather than by trial. 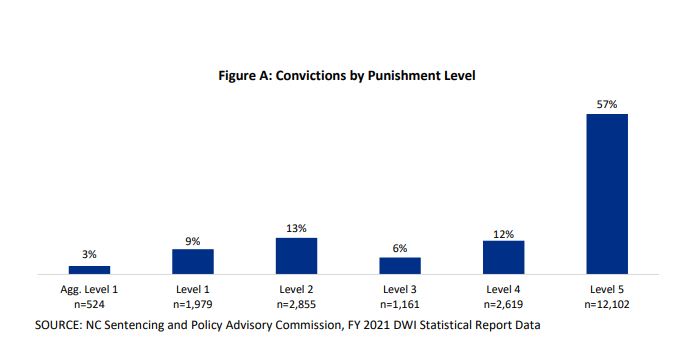 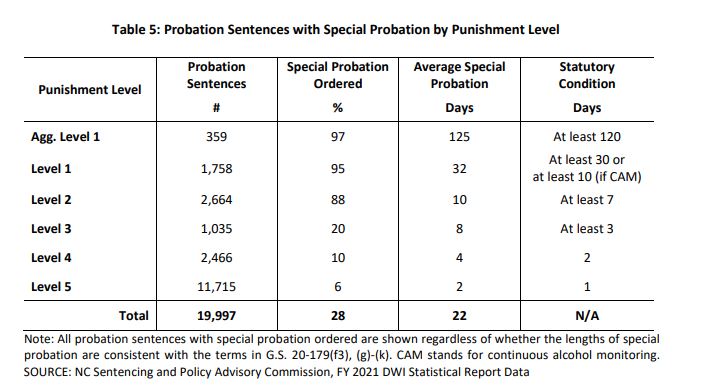 In addition to sentencing data, the report includes data about the characteristics of the offenders who were sentenced. Three-quarters of the convictions were for males, and more than half of those convicted were white. The average age of DWI offenders was 37.

Breath or blood alcohol concentration (BAC) levels were recorded for 75 percent of the convictions. Just over half of the BACs were between .08 and .14, and just under half were a .15 or more. The most frequently recorded BAC was .13. 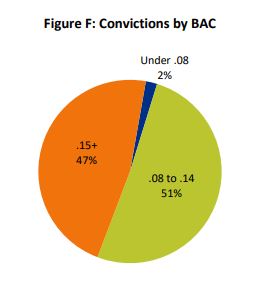 Time to disposition. The report reflects that the median number of months between charge and sentencing increased in FY 2021, which is not altogether surprising given that this time period included a full year of pandemic-affected operations. In FY 2021, the median time to sentencing for DWI convictions in district court was 13 months. In FY 2020, the median time was 9 months. District Court bench trials that resulted in convictions took 4 months longer to dispose of than guilty pleas (16 months compared to 12 months). In FY 2020, that was a 3-month difference (12 months compared to 9 months). Be sure to check out the full report for its comprehensive analysis and informative charts and tabulations. Hats off to the Commission’s talented staff for creating yet another enlightening report.