Facts and Figures for the North Carolina Court System

Twice over the last few weeks, I have been asked to teach public officials about North Carolina’s courts. In my day-to-day work, I spend a lot of time thinking about what our court officials do in particular cases and the law that governs those choices. I less often consider the structure in which they carry out that work. In preparing to talk about that broader topic, I gathered a few thoughts and, more importantly, links to important resources that I thought readers might find of interest. 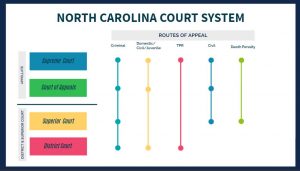 The numbers. You may know that there are seven justices on the North Carolina Supreme Court and fifteen judges on the North Carolina Court of Appeals. But did you know that there are 273 district court judges and 107 superior court judges? And do you know how many magistrates, elected district attorneys, and assistant district attorneys serve the State? You can find these numbers and additional helpful information on the Judicial Branch’s Quick Facts page, available here.

The relationship among various courts. When people talk about the court system, they often describe it like a pyramid, with the District Court Division forming the foundation, the Superior Court Division creating the second layer, the Court of Appeals the third, and the North Carolina Supreme Court at the top. But when you examine the routes of appeal for various cases, the relationships between the different divisions become a bit more complicated. This graphic illustrates the relationship between those divisions and charts the routes of appeal from trial to appellate courts for the various types of cases. (You have to click through the graphic to animate the appeal routes.)

Funding for the courts. The North Carolina Constitution requires that the operating expenses – including the salaries of judicial officials — be paid from State funds. N.C. Const. Art. IV, § 20. Nearly 90 percent of the judicial branch’s $578 million appropriation was spent on salaries and benefits in 2019-20. See North Carolina Administrative Office of the Courts, Annual Report of the North Carolina Judicial Branch 2019-20.

The State also is responsible for maintaining the facilities for the appellate courts. Facilities for trial courts are, in contrast, the responsibility of the counties, which must provide courtrooms, office space, and furniture for judicial branch operations. See G.S. 7A-302. Counties (and municipalities that have agreed to provide courtrooms and related facilities) receive court facility fees collected in their respective locales from the Administrative Office of the Courts, which may be used to defray the cost of providing those facilities and other services. See G.S. 7A-304(a)(2); -305(a)(1). Defray is the operational word as those amounts do not approach what is necessary to fully cover the expenditures. And the total collected from the fee has declined steadily in recent years, from over $20 million in fiscal 2008-09 to only $11 million in 2019-20. See North Carolina Administrative Office of the Courts, Statistical and Operational Report of the Budget Management and Financial Services 2019-20. Last year, Mecklenburg County received the largest amount, $931,477, while Hyde County received the smallest, $5,734.

Election of judges. Judges in both the trial and appellate divisions are elected in partisan elections. While judicial elections were nonpartisan for more than a decade, they again became partisan in 2018. My (ostensibly retired, but still productive) former colleague Michael Crowell wrote this article last August recounting the History of North Carolina Judicial Elections. Don’t be put off by the staid title. The document is full of political and historical intrigue, including the tale of the 2014 Court of Appeals race with 19 candidates on the ballot and the 2018 Supreme Court race featuring a late change in party registration.

Every rule needs an exception, and special superior court judges are the exception to the rule that judges are elected. These judges (there currently are 12) are appointed by the Governor and must be confirmed by the General Assembly. G.S. 7A-45.1. They serve five-year terms.

Selection and roles of clerks and magistrates. Clerks of superior court are elected in partisan county elections to four-year terms. There is one elected clerk in each county. Though clerks are judicial officials, who preside over significant matters including the probate of wills, the determination of incompetency and the appointment of guardians, adoptions and foreclosures, they are not required to be attorneys. Clerk’s office personnel are the largest single group of judicial branch employees, with more than 2,600 such employees statewide.

Magistrates, who are officers of the district court, also are judicial officials who have important duties in both civil and criminal cases, including presiding over summary ejectment proceedings and small claims actions and issuing search and arrest warrants and setting conditions of release in criminal cases. There are more than 600 magistrates in the State. They serve in their county of residence upon being appointed by the senior resident superior court judge. They serve an initial two-year term and then serve subsequent four-year terms. G.S. 7A-171. Magistrates are not required to be attorneys, and most are not.  Magistrates must have a four-year college degree or a two-year associate degree and four years of relevant work experience. G.S. 7A-171.2. Magistrates also are the only judicial officials who may officiate weddings. G.S. 7A-292(a)(9).

The big picture. Arguably the most noteworthy characteristic of North Carolina’s court system is that it is a uniform statewide system. That means that all of its judicial officials – from elected clerks, magistrates and trial court judges to judges on the state’s appellate courts – are selected pursuant a uniform set of rules. The work of those officials is likewise governed by a uniform set of laws and procedures and they are paid by salaries established by and funded through the State rather than from monies gathered through the collection of fees.

Acknowledgements. My understanding of and my writing about the court system is based upon earlier foundational work by my colleagues, the aforementioned Michael Crowell and my mentor-in-chief, Jim Drennan.