New Districts and District Attorneys in 2019

2019 won’t be the only new number you’ll need to adjust to come January 1. On that date, most of North Carolina’s prosecutorial districts also will have new numbers. Several of them will also have newly elected district attorneys.

New district numbers. Retracing the changes in district numbers requires a bit of back-tracking.  The first significant recent change was enacted by Section 18B.9.(e) of S.L 2017-57, which renumbered prosecutorial districts by whole numbers, removing the designations of A,B,C, and D for prosecutorial districts other than District 9A. Those changes, which were to be effective January 1, 2019, were amended by several subsequent session laws, Section 5.6.(a) of S.L. 2017-197, Section 18B.6 of S.L. 2018-5, Section 24.(a), (b) of S.L. 2018-114, and Section 3.(a). of S.L. 2018-121. Along the way, several prosecutorial divisions were reconstituted, and District 9A was eliminated altogether.

Because judicial district bars are nearly coterminous with prosecutorial districts, the State Bar prepared this helpful chart noting the changes in district numbers. The one exception to the coterminous rule applies in High Point, which has its own district bar, designated in the chart as District 24H. Guilford County, the county in which most of High Point is situated, is Prosecutorial District 24. 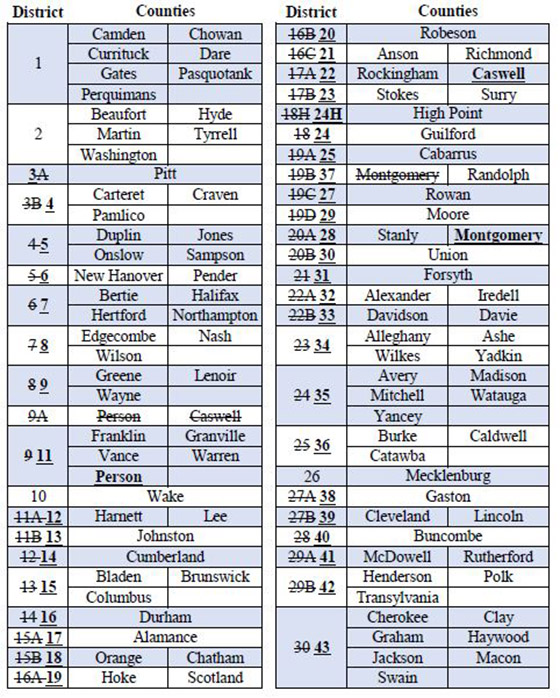 This could get confusing. Several superior and district court districts continue to be designated by numbers that contain alphabetical subcategories. As a result, the numbers for 2019 prosecutorial districts differ significantly from those of judicial districts. Superior Court and District Court Districts 3B, for example, consist of Carteret, Craven, and Pamlico Counties. The prosecutorial district containing those same counties is District 4. I plan to keep multiple district maps (available here) on my desk.

New District Attorneys. There are some new names in the mix as well. The following district attorneys were newly elected to terms of office beginning in January 1, 2019, though two of them (Jason Ramey and Spencer Merriweather) already were serving in the role of district attorney pursuant to gubernatorial appointment.

Now get to work learning all those new numbers–or at least the ones in which you reside or practice!