Criminal Contempt on the Web

Every practicing attorney and judge has by now likely seen the video of the Texas attorney who appeared at a court hearing conducted via Zoom in the form of a fluffy, white kitten. “I’m here live. I’m not a cat,” has emerged as the mantra of the week. The enthusiasm with which the recording has been shared reflects both the ubiquity of web-based hearings and the technological mishaps that can derail them. But technology is not the only thing that can go awry in a remote proceeding. Sometimes the problems are more fundamentally human, arising from behaviors that, were they committed in the courtroom, might lead to a finding of direct criminal contempt. Repeatedly talking over a judge or another litigant, arguing with a judge after having been asked to be quiet, cursing at a judge or another person present, using a racial slur, or appearing in a state of undress are examples. When a person engages in this sort of behavior in a remote proceeding, may the judge summarily punish the act as direct criminal contempt? Or must the judge issue an order to show cause and address the contemptuous behavior in a subsequent proceeding? 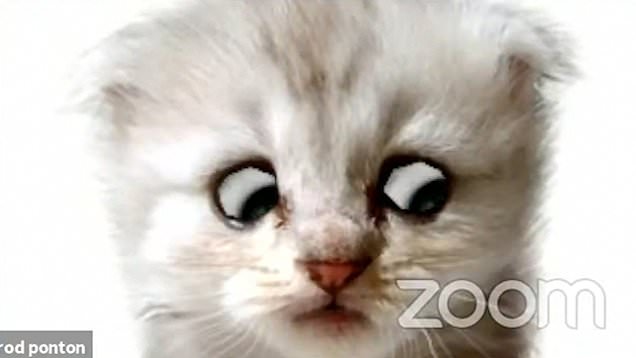 Contempt, generally.  My now-retired colleague, Michael Crowell, wrote a comprehensive article about contempt that is available here.  Michael addressed therein the distinction between criminal and civil contempt, the statutory grounds for contempt, and the procedural requirements for determining and sanctioning contempt. This post addresses a narrower issue: Is contemptuous behavior committed during a remote proceeding direct criminal contempt?  If it is, it may be addressed summarily during the remote proceeding.  If it is not, it must be addressed at a subsequent plenary hearing.

Direct contempt. Criminal contempt is direct when the act: (1) is committed within the sight or hearing of a presiding judicial official; (2) is committed in, or in immediate proximity to, the room where proceedings are being held before the court; and (3) is likely to interrupt or interfere with matters then before the court. G.S. 15A-13. Thus, the statutes (and due process) permit contempt to be punished summarily only when it committed in the presence of the judge.

The room issue. One word in the above definition poses a problem for summarily punishing contemptuous behavior that occurs in a web-based hearing: room. To be direct, contempt must be committed in or in immediate proximity to the room where the proceedings are being held. Can this criteria be satisfied when the judge is in a different physical room altogether from the contemnor even though the two are in the same virtual room?

Our appellate courts have not, to my knowledge, considered this issue. Courts in other states, with differently worded contempt statutes, have determined that a person’s actions in a web-based proceeding may constitute direct criminal contempt.

The presence issue. Many of the remote proceedings that courts are conducting these days are authorized by Emergency Directive 3, issued by Chief Justice Newby in light of the COVID-19 pandemic. This directive authorizes judicial officials to conduct proceedings that include remote audio and video transmissions so long as they safeguard litigants’ constitutional rights and preserve the integrity of the judicial process. If a remote proceeding implicates a defendant’s right to presence, he or she must waive that right before remote proceedings may be used. When a criminal defendant waives the right to presence in an underlying proceeding in which he or she then behaves contemptuously, that earlier waiver of presence may extend to permit a remote summary direct criminal contempt proceeding. But when the contemnor is not a criminal defendant, a summary direct criminal contempt proceeding may not be authorized absent an express waiver of presence by the contemnor.

Practical considerations. Direct criminal contempt may be punished by censure, imprisonment of up to 30 days, a fine of up to $500, or any combination of the three. Censure and a fine could be imposed without undue difficulty in a remote proceeding. The same is true for a suspended term of imprisonment. But imposing an active term of imprisonment when the person is not present before the court raises questions about how the order will be enforced. G.S. 5A-16(b) permits a judge to issue an order for arrest based on probable cause that a person will not appear for a plenary contempt proceeding, but there is no corresponding provision applicable to ensuring that a person serves a term of imprisonment for direct contempt. G.S. 5A-16(a) does permit a judge to order that a person he or she is charging with direct contempt be taken into custody to assure the person’s presence for summary proceedings; thus, assuming direct contempt is appropriate, the judge could order the person taken into custody for an in-person summary proceeding. The shortcomings of that solution are self-evident in times of COVID.

What’s a judge to do? Many wise jurists have counseled ways to avoid lowering the contempt hammer, including taking a recess, continuing a hearing involving contentious parties, and, these days, muting a participant. Yet, on occasion, a judge may decide that contempt proceedings are the appropriate response to willful disrespectful and disruptive behavior. When that behavior occurs in a remote hearing, it is not clear whether it may be punished summarily as direct contempt. A judge who desires to address the behavior and avoid challenges to the propriety of the proceeding may opt to issue an order to show cause and to schedule the matter for a plenary hearing.