Legislation passed this fall allows for more remote license renewals, supports the study of futuristic license plates, exempts drivers and passengers in some open-air autocycles from helmet requirements, and makes it easier to buy an alcoholic beverage the day after your twenty-first birthday. 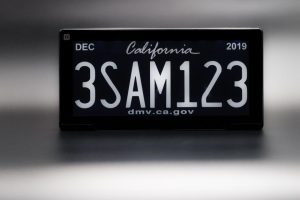 House Bill 211, chaptered as S.L. 2019-227, makes a number of changes to the state’s motor vehicle laws, including changes in the four categories mentioned above.

Remote License Renewals. No one likes to wait in line at DMV. A few years ago, the legislature made efforts to reduce those lines by permitting remote driver’s license renewal for eligible persons. Since June 2015, a North Carolina resident with a valid, unexpired Class C North Carolina driver’s license issued when the person was at least 18 years old has been eligible to renew his license online so long as his current license has no restrictions other than a restriction for corrective lenses and his most recent license renewal was in person. S.L. 2019-227 expands the remote renewal provisions to permit the holder of a valid full provisional license who is at least 18 years old to remotely convert that full provisional license into a regular driver’s license without personally appearing at DMV. This likely is welcome news to those newly minted adults, many of whom will have visited DMV three times in the previous three years: once to obtain a limited learner’s permit, a second time a year later to obtain a limited provisional license, and a third time–in as few as six months after their last visit–to obtain a full provisional license. To be eligible for remote conversion, the full provisional license may include no restrictions other than a restriction for corrective lenses. The converted license (like other driver’s licenses issued to persons less than 66 years old) is valid for eight years. The legislation was effective September 27, 2019, though remote conversions presumably will not be available until DMV amends its administrative rules to implement these provisions.

Futuristic license plates. UPI reported last May that states were moving toward adopting digital license plates, which can do more than display a person’s tag number and expiration date. Such plates, currently produced only by the San Francisco Bay area-based startup Reviver, reportedly can collect tolls, pay for parking, and display Amber Alerts, among other technological feats. If a vehicle is reported stolen, the display may be remotely changed to read “Stolen,” alerting everyone who sees the tag (and who doesn’t mistake it for an odd choice in personalization) of the vehicle’s status. The plates are powered through a connection to the vehicle’s electronic system and by battery.

Not surprisingly, digital plates cost far more than their aluminum counterparts. The plates range in cost from about $500 to $800 and require payment of a monthly service fee of about $7. Several states, including Arizona, California, Michigan and Texas, already permit at least limited use of digital license plates.

Concerns about the feasibility of digital plates are not limited to costs. Because the plates can collect, store and transmit data, including location information, some have questioned the impact this technology will have on privacy interests. Reviver says its data is secure, controlled by its customers, and is not shared with third parties, including DMV and law enforcement.

North Carolina has not yet taken the plunge on digital plates, but has decide to investigate the waters. S.L. 2019-227 directs the state’s Joint Legislative Transportation Oversight Committee to study the feasibility of digital license plates and to report its findings along with any recommended legislation to the legislature during its 2020 session. 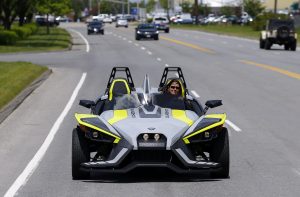 Open-air autocycles. The North Carolina General Assembly first defined and regulated the operation of autocycles in 2015. See S.L. 2015-163. Those vehicles initially were defined as three-wheeled motorcycles with, among other features, completely enclosed seating. Legislation adopted the next year permitted autocycles to have partially enclosed seating, but specified that autocycle drivers and passengers were exempt from helmet requirements only if the autocycle had completely enclosed seating. See S.L. 2016-90. This year, the legislature revised the helmet requirement for motorcycles and mopeds, codified in G.S. 20-140.4(a)(2), to provide that drivers and passengers in an autocycles equipped with a roll bar or roll cage also are exempted from wearing a safety helmet. That amendment was effective October 1, 2019.

Turning 21 and ordering a drink. Several months ago, my nephew turned 21. We took him to dinner a few days after his birthday, and he attempted to order a beer from the bartender. No go. He had forgotten to renew his full provisional license before his birthday, and the license expired the day he turned 21. The bartender would not sell him a beer based on an expired driver’s license as proof of his age. S.L. 2019-227 changes the expiration date for such licenses. Amended G.S. 20-7(f)(1) provides that a full provisional license issued to a person under 21 expires 60 days following the person’s twenty-first birthday. That change was effective when the legislation was enacted on September 27, 2019. It is unclear whether the amended provision applies only to full provisional licenses issued after the effective date or instead to all current full provisional licenses. In any event, my nephew is on solid ground now, having obtained his Class C driver’s license the week after his birthday.