Procedural justice and procedural fairness are terms that refer to the way legal authorities interact with the public and how those interactions shape the public’s view of those authorities. I first learned of this framework for evaluating those interactions in connection with my work with court officials. Researchers have determined that people’s assessments of their experiences in the court system are influenced more by how they are treated and how their cases are handled than by whether they win or lose. It turns out that the same principles apply to the public’s perception of law enforcement officers. And a perception of procedural justice may increase the public’s compliance with the law and their willingness to cooperate with officers. 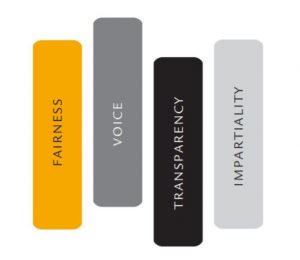 The procedural justice framework. Many criminal justice policies and enforcement practices are based on a deterrence model, which suggests that behavior is shaped by material incentives and sanctions. Tom Tyler et. al., The Impact of Psychological Science on Policing in the United States: Procedural Justice, Legitimacy, and Effective Law Enforcement, 16(3) Psychological Science in the Public Interest 75, 77 (2015) [hereinafter Impact on Policing]. Procedural justice does not reject the notion that people are motivated by incentives; instead, it incorporates a broader view, which recognizes that rewards and punishment are not all that people care about. Id. at 78. Advocates for a procedurally just approach to policing insist that the deterrent effects of punishment should be supplemented by building the legitimacy of the police force and drawing on its “motivational power to further enhances efforts at maintaining social order.” Id.

Legitimacy refers to the belief among people in a society that those in power deserve to make decisions that influence the lives of others. Id. at 81. Empirical studies have indicated that people’s perceptions regarding the legitimacy of the police, the courts and the law positively influence their deference to police authority during personal encounters, their compliance with the law, their cooperation with the police, and their acceptance of police authority. Id.

Proponents of the procedural justice approach characterize an emphasis on fairness as “central to police success in maintaining social order.” Stephen J. Schulhofer et. al., American Policing at A Crossroads: Unsustainable Policies and the Procedural Justice Alternative, 101 J. Crim. L. & Criminology 335, 349 (2011) [hereinafter Policing at A Crossroads]. Their argument is that even though tough enforcement measures initially may increase the likelihood that an offender will be apprehended and convicted, too-tough enforcement can chill voluntary compliance and cooperation from the law-abiding community. Id. The reduced cooperation then makes it less likely that offenders will be apprehended and convicted, which in turn decreases voluntary compliance. Id. at 349 -51 (“[T]he empirical research canvassed here suggests . . . that intensive law enforcement and a readiness to arrest for low-level offenses is far more likely to arouse resentment, weaken police legitimacy, and undermine voluntary compliance with the law.”)

What does procedurally just policing look like? It looks different from zero-tolerance and “order-maintenance” policing and requires a move away from the command-and-control model. Id.; see also Jason Sunshine & Tom R. Tyler, The Role of Procedural Justice and Legitimacy in Shaping Public Support for Policing, 37 Law & Soc’y Rev. 513, 520 (2003) [hereinafter Role of Procedural Justice]. Instead, it involves a holistic look at the way in which officers interact with the people in the community they serve. See Laura Kunard & Charlene Moe, Procedural Justice for Law Enforcement: An Overview (Center for Public Safety and Justice, University of Illinois 2015).

According to procedural justice experts, people evaluate the legitimacy of law enforcement officers by evaluating the degree to which they are (a) making decisions fairly and (b) treating people fairly. Impact on Policing, at 85. Two key components of procedural justice are tied to each of these processes.

Fair decisions. For fairness in decision-making, experts point out that people want the opportunity to explain their situation to a police officer. In other words, they want to have a voice. And they want to have that voice both in personal encounters with officers on the street and when policies about policing are developed in the first place. The second component related to fair decision-making is the positive reaction that people have to evidence that officers are neutral and unbiased. Officers appear neutral when they make decisions based on “consistently applied legal principles and the facts particular to an incident,” rather than their own personal opinions and biases.” Id. Transparency and openness about rules and how decisions are made also support the impression that officers’ decision-making is neutral. Id.

Fair treatment. With respect to the fair treatment of individuals, experts point out that people believe that “by virtue of their status as members of the community they are entitled to be treated with respect.” Id. People react negatively to treatment that they perceive “as dismissive or demeaning” as that kind of treatment sends messages about “inclusion and status and influences identity and feelings of self-worth.” Id. Disrespectful treatment tells a person that he or she is not entitled to the rights and protections of other members of his or her society. Respectful treatment, in contrast, is reassuring: “It tells people that the authorities will be responsive and concerned when they have a problem.” Id. Thus, respect is a key component of procedural justice.

Being polite is, of course, not a panacea. Researchers have pointed out that people distinguish their own experiences with law enforcement officers from their general sense of what the police are doing. Id. at 87. Those overall experiences contribute more heavily to police legitimacy. Id. For example, “if young people’s initial interactions with the police involve being repeatedly stopped, they will interpret their later interactions as unfair irrespective of how the police behave because they regard being stopped repeatedly as unfair.” Id. Researchers in another study found that when officers stopped drivers for minor infractions, asked prying questions and requested to search, the encounters engendered hostility and resentment, regardless of whether the officer was polite and respectful. Jonathan Blanks, Thin Blue Lies: How Pretextual Stops Undermine Police Legitimacy, 66 Case W. Res. L. Rev. 931, 934 (2016). That hostility and resentment was greater among African American and Latino drivers—who were stopped much more often for investigatory purposes. Id.

The final component of procedural justice is information that the authorities are trustworthy. The presence of this component depends upon a person’s inferences about the motives of the authorities.  Are they benevolent and trying to do what is best? These types of favorable motivations may be inferred when officers “listen to people’s accounts and show an awareness of and sensitivity to the needs and concerns that people have expressed.” Id.

A change in approach. Adopting a procedural justice approach requires, for some departments, a reorientation from a model that addresses situations primarily with the threat of force. Policing at A Crossroads at 351. Officers must instead be trained to “view every citizen contact as an opportunity to build legitimacy through the tone and quality of the interaction.” Id. Force is not “withdrawn from the law enforcement arsenal,” but is made “a last resort.” Id. at 351-52 (acknowledging that “[s]tops based on objective indications of a serious offense are almost always warranted, and they need not trigger community mistrust if police pay attention to what happens during such stops;” citing data suggesting that “although African Americans resent high levels of arrest for public-order offenses, their approval of the police is ‘positively correlated with arrest rates for more serious offenses.’”) The goal is to transform the police from “an occupying force into genuine partners with all components of the community, minorities and the poor included.” Id. at 357. Proponents say this approach can enhance the safety of both law enforcement officers and residents of the community. Jason Sunshine & Tom R. Tyler, The Role of Procedural Justice and Legitimacy in Shaping Public Support for Policing, 37 Law & Soc’y Rev. 513, 520 (2003). And it may improve the public’s evaluation of the police, which research suggests is based more on how law enforcement officers treat people than how they perform their job. Id. (citing findings from a study of Oakland, California residents living in high crime areas that how the police treated people explained more of the variance in police evaluations than did variations in the quality of police performance). Experts insist that law enforcement officers do not have to choose between controlling crime and maintaining positive public evaluations.  They can have both when they exercise their authority fairly. Id.