Procedural Fairness: How to Do It and Why It Matters 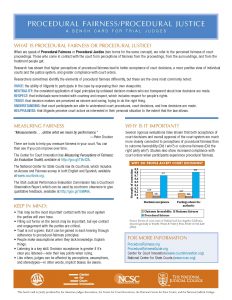 More than 200 district court judges from districts across North Carolina convened last week for their semiannual conference. Much of the continuing education agenda was dedicated to informing judges about the controlling law for the types of cases over which they preside—criminal, family and juvenile. But one session had a different focus. Instead of teaching judges how to “get outcomes right,” Judges Kevin Burke and Steve Leben talked to the group about how to handle procedural matters in a “way that enhances perceptions of fair treatment.” Kevin Burke & Steve Leben, The Evolution of the Trial Judge from Counting Case Dispositions to a Commitment to Fairness, 18 Widener L. J. 397, 403-04 (2009) [hereinafter Evolution]. The presenters made the case that institutionalizing principles and practices of procedural fairness can increase public support for and confidence in the courts, leading to greater acceptance of court decisions, greater public approval of the court system and increased compliance with court orders.

What the research shows. Burke and Leben described decades of research demonstrating that people’s evaluation of their experiences in the court system are influenced more by how they are treated and their cases are handled than by the outcome. See Tom R. Tyler, Procedural Justice and the Courts, 44 Court Review 26 (2007-08) [hereinafter Procedural Justice]. In other words, “most people care more about procedural fairness . . . than they do about winning or losing the particular case.” Evolution at 404. People value fair procedures because they are perceived to produce fair outcomes. Id. at 405. Yale Law Professor Tom Tyler, a leading researcher in this area, states that “an especially important finding of studies on procedural justice is that people are more likely to continue to abide by a decision if that decision is made through a fair procedure.” Procedural Justice, at 28. Tyler explains that the fair process “legitimates the decision and creates commitment to obeying it that is found to persist in to the future.” Id. In addition, Tyler notes that “studies find that people’s general commitment to obeying the law is heightened when they experience fair procedures in legal settings.” Id.

Voice is the ability of litigants to participate in the case by expressing their own viewpoints.

Neutrality is the consistent application of legal principles by an unbiased decision maker who is transparent about how he or she made the decision.

Respect is treating individuals with dignity while protecting their rights.

Trustworthy Authorities relates to the character of the decision maker. Is he or she sincere and caring?

Practical suggestions. Judges Burke and Leben made numerous suggestions about how judges could improve the public’s perception of procedural fairness, including explaining procedures and rulings in plain language without legal jargon, avoiding “multi-tasking” (a practice that, in addition to being off-putting, also results in diminished performance), and video-taping themselves—both to personally observe and to seek objective feedback about—their demeanor and conduct.

Want to know more? Judges Burke and Leben, Professor Tom Tyler and the National Center for State Courts teamed up to create a Procedural Fairness website and blog to promote procedural fairness in courtrooms and courthouses and to bridge the gap between academic research and practice. There you can find information regarding the research underlying their recommendations and specifics on how state courts have assessed their own procedural fairness and how they have implemented practices to improve their performance.