When a person suspected of driving while impaired is involved in a crash and receives medical treatment, the State may wish to obtain the person’s medical records for use in criminal prosecution. What standards and procedures govern the disclosure of such records? 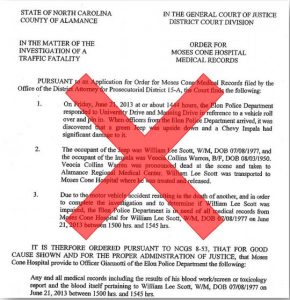 Medical records are confidential. G.S. 8-53 renders confidential information obtained by a health care provider in “attending a patient in a professional character,” that is “necessary to enable him to prescribe for such patient as a physician, or to do any act for him as a surgeon.” Thus, a health care provider may not be required to disclose such information. Moreover, when confidential information of this sort is memorialized in medical records, and the patient is living, G.S. 8-53 provides that it may be disclosed only with permission of the patient or pursuant to an order issued by the appropriate judicial official (or the Industrial Commission in appropriate cases).

In addition, federal regulations impose restrictions on health care providers’ disclosure of protected health information. 45 C.F.R. Parts 160, 164. Health care providers subject to these requirements may disclose such information for a law enforcement purposes to a law enforcement official in compliance with a court order or court-ordered warrant, or a subpoena or summons issued by a judicial official. 45 C.F.R. 164.512.

Exception to confidentiality rules in crash cases. Notwithstanding these confidentiality rules, G.S. 90-21.20B(a1) requires a health care provider providing medical treatment to a person involved in a vehicle crash to disclose certain information to a law enforcement officer. The health care provider must, upon request, disclose the following information to any law enforcement officer investigating the crash:

Id. The statute further requires that law enforcement officers be provided access to visit and interview a person involved in a vehicle crash.

Burden of proof. North Carolina’s appellate courts have held in related contexts that when the State seeks to compel a third-party to disclose private information in the interests of justice, it must present to the trial judge an affidavit or similar evidence setting forth information showing reasonable grounds to suspect that a crime has been committed and that the records sought are likely to bear upon the investigation of that crime. In re Superior Court Order, 315 N.C. 378 (1986) (applying standard to disclosure of bank records); In re Brooks, 143 N.C. App. 601 (2001) (applying standard to disclosure of officers’ personnel files). The proffer of an affidavit or similar evidence is essential as it enables the trial court to “make an independent decision as to whether the interests of justice require the issuance of an order rather than relying solely upon the opinion of the prosecuting attorney.” In re Superior Court Order, 315 N.C. at 381 (1986).

Search warrant. G.S. 90-21.20B also sets forth rules governing the disclosure of identifiable health information (essentially, medical records). It requires a health care provider to disclose such information related to a person involved in a vehicle crash as specified in a search warrant or an order issued by a judicial official. G.S. 90-21.20B(a1).

A more broadly applicable subsection of that statute–not limited to records of a person involved in a vehicle crash–permits a health care provider to disclose to a law enforcement officer protected health information to the extent such information may be disclosed under federal regulations and is not specifically prohibited from disclosure by other state or federal law. G.S. 90-21.20B(a).

State v. Smith, 248 N.C. App. 804 (2016). The court of appeals in Smith rejected the defendant’s argument that medical records establishing his elevated blood alcohol concentration after he crashed his motorcycle were improperly obtained pursuant to a search warrant and improperly admitted at trial. The defendant argued that pursuant to G.S. 8-53, disclosure of his medical records could be compelled only by judicial order based upon a determination that the disclosure was necessary to a proper administration of justice. The State countered that G.S. 90-21.20B permits disclosure notwithstanding other provisions of law.

Burden of proof. A search warrant may properly be issued based on probable cause that contraband or evidence of a crime will be found in a particular place. State v. Benters, 367 N.C. 660, 664 (2014). An application for a search warrant must be made in writing by sworn statement and must be supported by one or more affidavits setting forth the facts and circumstances establishing probable cause to believe that the items are in the places or in the possession of the individuals to be searched. G.S. 15A-244.

A recent case. Last week, the court of appeals in State v. Scott, ___ N.C. ___, ___ S.E.2d ___ (2020) considered how these rules applied to a court order directing a hospital to turn over medical records of a driver treated at the hospital following a fatal crash and any blood withdrawn from the driver.

Facts. The defendant was involved in a fatal crash in Elon. He was speeding when he crashed into a car turning left across his lane of travel. The driver of the other car was pronounced dead at the scene. The defendant was “in and out of consciousness” after the crash and was transported by ambulance to a Greensboro hospital.

An officer spoke to the defendant later in the day that the accident occurred. He did not detect signs that the defendant was impaired. In his accident report, he determined that the other vehicle was in the defendant’s travel lane at the time of the crash.

Five days after the crash, an assistant district attorney petitioned a district court judge for an order directing the hospital to turn over the defendant’s medical records and any blood it had withdrawn from the defendant. The hospital turned over three vials of defendant’s blood, which were analyzed by the State Crime Lab, revealing a blood alcohol concentration (BAC) of .22.

The defendant was subsequently indicted for second degree murder.

Court of appeals. The court of appeals determined that the district court improperly ordered that the medical records be disclosed and the blood be provided. The district court’s order was based on nothing more than a bare allegation that a fatality had occurred. The State did not submit an affidavit or other evidence demonstrating reasonable suspicion that a crime had been committed and that the records and evidence sought were likely to bear on the investigation of that crime.

The court further determined that the superior court erred in denying the defendant’s motion to suppress. The district court’s order did not comport with G.S. 8-53 and the disclosure of the evidence was not proper under G.S. 90-21.20B(a1), which requires a valid court order or search warrant.

The court went on to conclude, however, that the error in admitting the evidence was not prejudicial. It reasoned that the malice necessary to establish second degree murder could have been predicated on defendant’s high speed and reckless driving combined with his prior record of traffic offenses.

A dissent. Judge Brook concurred in part and dissented in part. He agreed with the majority that neither of the orders entered by the district or superior courts allowing the state to obtain and introduce evidence that the defendant was impaired at the time of the crash were based on evidence showing reasonable suspicion that defendant committed any crime. In addition, he expressly characterized the disclosure as a violation of the defendant’s Fourth Amendment rights. Judge Brook dissented, however, from the majority’s holding that the admission of this evidence did not constitute prejudicial error.

The dissent entitles the defendant to review as a matter of right, of course, so we will await the state supreme court’s take on the issues in Scott.

Takeaways. Medical records are confidential, and when the State seeks their disclosure for purposes of a criminal investigation, it must follow the applicable statutory procedures. The State has two options: (1) apply for a search warrant supported by probable cause; (2) petition the court for disclosure of medical records. If the State chooses the latter option, an attorney must file the petition and he or she must provide evidence demonstrating reasonable suspicion that a crime had been committed and that the records and evidence sought are likely to bear on the investigation of that crime.

Update:  I’ve received a couple of questions about whether the defendant must be notified of the application for a search warrant or the petition for a court order for disclosure of the defendant’s medical records.

There is no requirement that the defendant be given notice of an application for a search warrant, regardless of whether it is applied for and issued before or after charges are filed. Jeff Welty addressed that issue here.

If, however, an attorney petitions for the disclosure of medical records under G.S. 8-53 after the defendant has been charged, then the petitioning attorney must provide notice to the defendant or the defendant’s attorney. Jeff addressed that issue in this 2009 blog post.