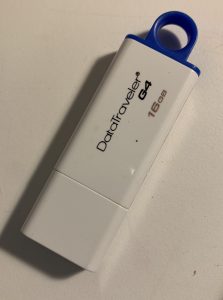 The North Carolina Supreme Court held in State v. Terrell, _­_ N.C. __ (Aug. 16, 2019), that a private party’s limited search of a defendant’s thumb drive did not frustrate the defendant’s legitimate expectation of privacy in the entire contents of the electronic storage device. The detective who searched on the heels of the private party could not be virtually certain that he would find nothing else of significance on the device or that his search would do no more than corroborate what the private searcher had told him. Thus, the court concluded that the detective could not lawfully search additional folders on the thumb drive without a warrant after the private party turned the device over to law enforcement.

Facts. The defendant lived with his long-time girlfriend, Jessica Jones, in her home. One day while the defendant was at work, Jones removed a thumb drive from his briefcase, plugged it into a computer, opened it, and began clicking through folders and sub-folders. Jones was looking for a picture of the defendant’s former housekeeper so that she could “put a face to the person” she had heard him mention.

In addition to finding images of the housekeeper and other images of adult women and children, Jones discovered an image of her nine-year-old granddaughter sleeping in a bed and exposed from the waist up. Jones became upset, stopped her search, and called her daughter, the child’s mother. The two of them took the thumb drive to the Onslow County Sheriff’s Department, where Jones reported what she had discovered.

The next day, a detective searched the thumb drive looking for the image of Jones’ granddaughter. He saw other images of what he believed to be child pornography before he found the image of the granddaughter. Upon finding that image, he stopped his search.

The detective applied for a warrant to search the thumb drive and other property of the defendant for evidence of child pornography. He did not mention in his application that he had already searched the thumb drive. Instead he reported what Jones had told him about the image she had seen of her granddaughter. The detective also reported allegations that one of Jones’s daughters had stated in the past that the defendant “touched me down there,” and that a floppy disk containing child pornography had once been found in the defendant’s truck. A magistrate issued the warrant.

The detective then received a call from the State Bureau of Investigation (SBI) requesting that he obtain a new warrant supported by additional information. The detective applied again for a warrant, this time including information from his search of the thumb drive, stating that he saw “several partially nude photographs of” Sandy and “several fully nude photographs of an unknown child standing beside [an] adult female in various sexual positions.”

An SBI agent conducted a forensic examination of the thumb drive pursuant to the second warrant. The agent found the image of Sandy in a folder named “red bone” and found twelve additional incriminating images in a different folder named “Cabaniia.” Both of these folders were, apparently, subfolders of the folder labeled “Bad stuff.” Newby, J., dissenting, slip op. at 2, 5. Ten of the twelve additional images had been deleted and archived and could only be viewed with a forensic tool.

Procedural history. The defendant was indicted on child pornography and related charges.

The defendant moved to suppress the evidence obtained as a result of the detective’s search of his thumb drive, arguing that the detective conducted a warrantless search of his property, that the second search warrant was based on evidence unlawfully obtained from that search, and that in the absence of that tainted information, the search warrant was not supported by probable cause. The trial court denied the defendant’s motion, finding that Jones’s viewing of the thumb drive effectively frustrated the defendant’s expectation of privacy as to its contents and that the detective’s later viewing of the contents of the drive did not violate the Fourth Amendment.

The defendant was convicted at trial and appealed the trial court’s denial of his motion to suppress. The court of appeals concluded that the detective’s search of the thumb drive was unlawful and remanded the case to the trial court to determine whether there was probable cause for a subsequently-issued search warrant without the evidence obtained from the detective’s initial search.

The state supreme court, in an opinion written by Justice Earls, affirmed the decision of the court of appeals. Justice Newby dissented, criticizing the majority for adopting a virtual certainty test that, in his view, “needlessly eliminates the private-search doctrine for electronic storage devices, making it impossible for law enforcement to verify provided information.” Newby, J., dissenting, slip op. at 3.

What is the private search doctrine? I wrote about the private search doctrine and the court of appeals’ opinion in State v. Terrell here.  The doctrine establishes that the Fourth Amendment is not implicated by the government’s inspection of a person’s private effects when that inspection follows a private party’s search and does not exceed its scope. This is because the search by the private party frustrates an individual’s reasonable expectation of privacy regarding the item or area searched. The doctrine has been applied to justify warrantless governmental searches of videotapes, computer disks, luggage, and other items turned over to law enforcement officials by private parties.

What is the virtual certainty test? In United States v. Jacobson, 466 U.S. 109 (1984), the seminal case defining and applying the private search doctrine, the Supreme Court noted the “virtual certainty that nothing else of significance was in the package” containing cocaine that had first been opened and examined by Federal Express employees before being searched by government agents. The court also noted that the agent’s subsequent inspection of the package did not tell the agent “anything more than he already had been told.”

How did the state supreme court apply these principles in Terrell? The state supreme court characterized the issue as being whether the defendant’s thumb drive, or any part of it, could continue to support a legitimate expectation of privacy after Jones’s search. The court rejected the State’s argument that the thumb drive was a container that, once “opened” by Jones, could be searched in its entirety without implicating the Fourth Amendment. Electronic storage devices differ from other types of containers. They may contain vast amounts of information stored in containers within containers. A search of one container, or folder, on such a device often exposes nothing about the contents of other folders stored elsewhere on the device. For that reason, an officer cannot follow a private individual’s mere opening of a thumb drive with certainty that nothing else of significance is on the device or that she will not learn from her inspection something more than the private party told her. The extent to which an individual’s expectation of privacy in the contents of an electronic storage device is frustrated depends on the extent of the private search and the nature of the device and its contents.

Thus, the supreme court found that the trial court erred in concluding that Jones’s viewing of the flash drive frustrated the defendant’s expectation of privacy in its contents. The trial court’s findings did not establish the precise scope of Jones’s search and whether the detective had virtual certainty that he would find nothing else of significance on the device and would learn no additional information. Moreover, the trial court could not have made these findings, the court reasoned, because the State failed to present evidence that would warrant them. Neither Jones nor the detective testified to the exact folder pathway they followed to arrive at the image of the granddaughter, which folders or subfolders they opened or reviewed or which subfolder of images they scrolled through. And Jones did not see the images that the detective found in a separate folder.

Is the court’s opinion consistent with rulings from other jurisdictions? The state supreme court contrasted opinions from the Fifth and Seventh Circuits holding that law enforcement officers do not exceed the scope of a private search when they examine more items within an electronic storage device than did the private searchers with opinions from the Sixth and Eleventh Circuits holding that law enforcement officers’ searches of material on an electronic storage device beyond that viewed by the private searcher implicates the Fourth Amendment. Professor Orin Kerr wrote about Terrell last week, noting that it “deepened the existing 2-2 circuit split on how the [private search] doctrine applies to computers.” Kerr suggested that “[t]he U.S. Supreme Court may take on this issue soon, perhaps in this very case.”

In some circumstances, the information provided by the private party will be sufficient to establish probable cause for the issuance of a warrant. Indeed, Terrell was remanded for a determination of whether the warrant could have been issued based simply on the information that Jones reported to the detective. The dissent criticized the majority’s approach as “circular” as it prevented law enforcement officers from verifying the reported image for risk of inadvertently seeing other subfolders and files, without a warrant based on the probable cause that would be supplied by that verification. Newby, J., dissenting, slip op. at 22-23. But the majority rejected the notion that law enforcement officers could not obtain a search warrant without independent verification. If the State is virtually certain, based on a report from a credible witness, that an electronic storage device contains contraband, then, the majority reasoned, it will have probable cause to support the issuance of a warrant.