State v. Morgan and Findings of Good Cause for a Hearing after Expiration

Under State v. Morgan, a case recently decided by the Supreme Court of North Carolina, a trial judge can’t act on a probation case after it has expired unless he or she makes a finding that there is “good cause shown and stated” to do so. In the short run, you’ll need to modify the forms to do it.

In general, a trial court has jurisdiction to act on a probation case “at any time prior to the expiration or termination of the probation period.” G.S. 15A-1344(d). By act, I mean do all the various things that happen in probation cases—extend, modify, impose CRV, revoke, etc.

Under that law, for the court to act on a case after probation has expired, all of the following must apply:

We know from many appellate cases that our appellate courts mean business about the first requirement: the State must file its violation report before the case expires, as evidenced by the clerk’s file stamp, in order to preserve the court’s power to act. I discussed that provision, including the importance of getting the file stamp, here. The second requirement is straightforward; the court must make a finding that a violation occurred while the defendant was actually on probation.

The third requirement, for findings of “good cause shown and stated,” is relatively new. If you’ve been around for a little while you may remember the earlier version of G.S. 15A-1344(f), which required the court to make a finding that “the State ha[d] made a reasonable effort to notify the probationer and to conduct the hearing earlier” before acting on a case after expiration. In State v. Bryant, 361 N.C. 100 (2006), the supreme court held that a trial court lacked jurisdiction to revoke probation in the absence of such a finding. A lot of revocations from around that time were overturned for a lack of reasonable effort findings. See, e.g., State v. Hill, 183 N.C. App. 300 (2007) (unpublished).

Soon thereafter, the legislature amended G.S. 15A-1344(f), doing away with the reasonable effort finding and replacing it with the “good cause shown and stated” language we have today. S.L. 2008-129.

As demanding as the appellate courts had been about the file stamp requirement and the former reasonable effort requirement, they had (at least until about two weeks ago) been pretty lax about the good cause shown and stated language. For almost a decade, they read a trial judge’s decision to act on the case after expiration as a sufficient and essentially self-explanatory indication that the court had found good cause to do so. See State v. Regan, ___ N.C. App. ___, 800 S.E.2d 436 (2017).

And that—finally—brings us to State v. Morgan. In Morgan, the defendant’s probation officer filed a violation report on May 23, 2016. Probation expired on August 28, 2016. The violation hearing was held 12 days later on September 9, 2016. At the hearing, the trial judge found revocation-eligible violations and revoked.

The defendant eventually filed a petition for writ of certiorari with the court of appeals, arguing that the trial judge erred by revoking probation after it had expired without making the “good cause shown and stated” finding required by G.S. 15A-1344(f)(3). Over a dissent, the court of appeals rejected the argument and affirmed the revocation, noting that the defendant had admitted to all of the State’s allegations and that the hearing transcript and judgments entered reflected that “the trial court considered the evidence and found good cause to revoke . . . .” State v. Morgan, ___ N.C. App. ___, 814 S.E.2d 843, 848 (2018).

A unanimous supreme court reversed the court of appeals, agreeing with the defendant that G.S. 15A-1344(f)(3) means what it says: the court doesn’t have jurisdiction to act after probation expires unless it makes a finding that there is good cause shown and stated that probation should be extended, modified, or revoked. To read the law otherwise, the supreme court said, would be to render subdivision (f)(3) superfluous—and they try not to do that. Slip op. at 8 (citing Porsh Builders, Inc. v. City of Winston-Salem, 302 N.C. 550, 556 (1981) (“It is presumed that the legislature intended each portion [of a statute] to be given full effect and did not intend any provision to be mere surplusage.”)). And so, just as it did in Bryant over a decade ago, the court in Morgan reversed the revocation. The court remanded the case to the trial court for a finding of whether good cause exists to revoke.

What does Morgan require going forward? Well, if a probation case has expired by the time it gets before a trial judge for hearing, in addition to a file stamped violation report and a finding that a violation occurred during probation, the court is going to need to consider whether it has good cause to extend, modify, or revoke the probation despite that fact that it has ended, and if so, to make an additional finding to that effect.

It’s not clear whether the law requires specific factual findings in support of the determination of good cause (for example, “this violation occurred on the last day of the defendant’s probation, and therefore there is good cause to revoke probation even though it has since expired”), or whether it would suffice for the court to simply write “for good cause shown and stated, probation should be revoked.”

Consider State v. Wilkerson, 223 N.C. App. 195 (2012), in which the court of appeals interpreted the requirement for “specific findings” under G.S. 15A-1343.2(d) when a trial judge imposes a period of probation outside of the statutory default range. The court of appeals concluded in that case that the law—notwithstanding its reference to “specific findings”—did not require the trial judge to give a “detailed rationale.” To the contrary, checking the box that says “The Court finds that a longer period of probation is necessary than that which is specified in G.S. 15A-1343.2(d)” does the trick. If that sort of conclusory finding works in the probation-length context, then perhaps it works in the action-after-expiration context. But I do believe that to be an open question (and come to think of it, I don’t think the “specific findings” requirement in G.S. 15A-1343.2(d) has ever been before the supreme court).

For the time being, probation officers bringing violations before the court may wish to call it to the court’s attention when the case is already beyond expiration. If the court deems it appropriate to act on those violations, my recommendation would be to—at a minimum—include a line of free text on the modification or revocation order indicating that the court “finds for good cause shown and stated that probation should be [revoked/extended/modified].” As for me, I have made a note on page 9 of my book on Probation Violations in North Carolina, to be sure to update the now-outdated paragraph in the next edition. 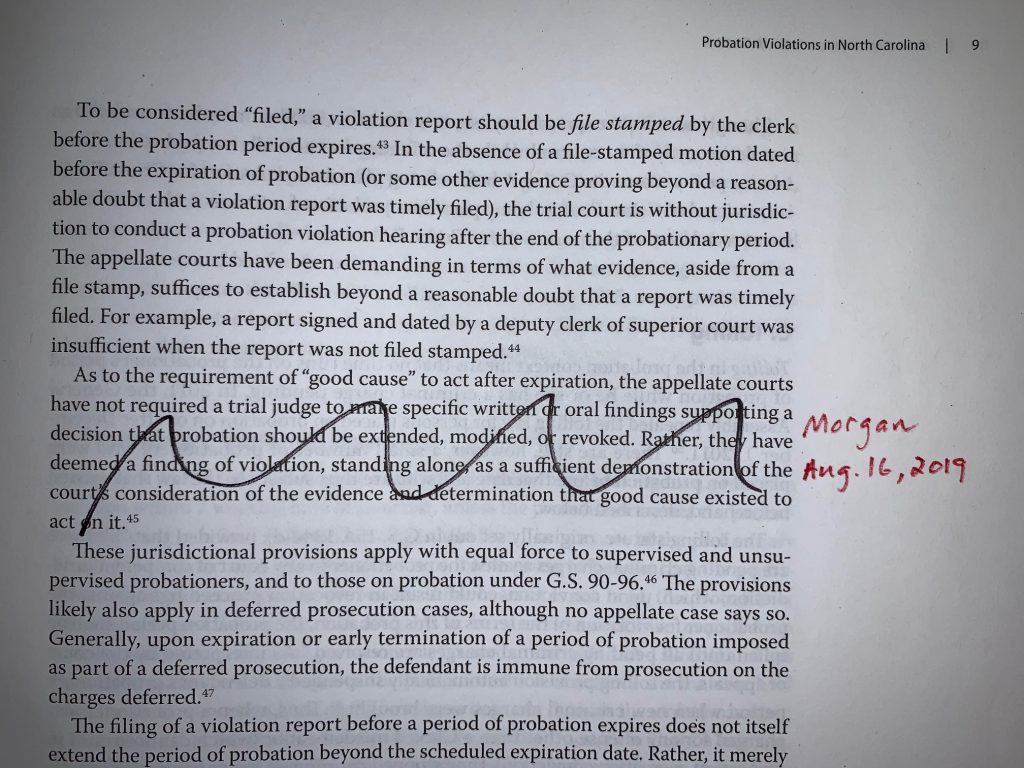