The negative impacts of the pandemic are far-reaching and well-documented. They include death, illness, disruptions in school and work, strains on the health care system, and backlogs in the courts. But if I had been asked back in March 2020 to predict the impact the pandemic would have on traffic safety, I would have guessed incorrectly.  I might have thought that since fewer people would be regularly driving to offices during predictable times of the day, traffic fatalities would decline. I would have been wrong. NC DOT analysis of traffic crashes during the pandemic revealed that while vehicle crashes decreased dramatically following the Governor’s declaration of a state of emergency in March 2020 and continued to remain below 2019 and prior year averages for the rest of the year, fatal crashes (which fortunately are a small subset – less than 1 percent — of total crashes) did not precipitously decline. Instead, they surpassed 2019 numbers and the five-year average during several weeks in the spring, summer and fall of 2020.

As it turns out, this upward trend in fatal crashes was not limited to 2020 or to North Carolina. The National Highway Traffic Safety Administration (NHTSA) published in October 2021 a statistical projection of traffic fatalities nationwide for the first half of that year. See NHTSA, National Center for Statistics and Analysis, Early Estimate of Motor Vehicle Traffic Fatalities for the First Half (January – June) of 2021, Traffic Safety Facts: Crash – Stats (October 2021) [hereinafter Early Estimate]. That projection showed a nearly 20 percent increase in fatalities in motor vehicle crashes from the first half of 2020. The calculation – that 20,160 people died in motor vehicle traffic crashes from January to June 2021 – represents the highest number of fatalities during the first half of a year since 2006 and the highest half-year percentage increase since 1979, when the Fatality Analysis Reporting System began recording data. NHTSA estimates that fatalities increased in all ten of its regions. The 10 percent increase in North Carolina’s region, Region 3, was second-to-lowest, with the highest increase (26 percent) in Region 10, which includes Alaska, Washington, and other Northwestern states.

NHTSA has also analyzed the severity of crash injuries before and during the pandemic, finding that data from the National Emergency Medical Services Information System suggests crashes became more severe with the onset of the pandemic. NHTSA, Office of Behavioral Safety Research, Continuation of Research on Traffic Safety During the COVID-19 Public Health Emergency: January – June 2021,Traffic Safety Facts: Research Note (October 2021) [hereinafter Continuation of Research]. In 2019, for every 10,000 patients injured in crashes, 100 needed high-level trauma care. In 2020, that number increased to 121. In 2021, 117 such patients needed high-level trauma care.

If there was any good news in NHTSA’s 2021 report, it was that the degree of increase in fatalities was greatly reduced in June 2021 as was the fatality rate per 100 million vehicle miles traveled. Early Estimate at 2.

The why. NHTSA reports that March 2020 ushered in a change not only to driving patterns (see figure 1) but also to driving behaviors. Continuation of Research at 1. 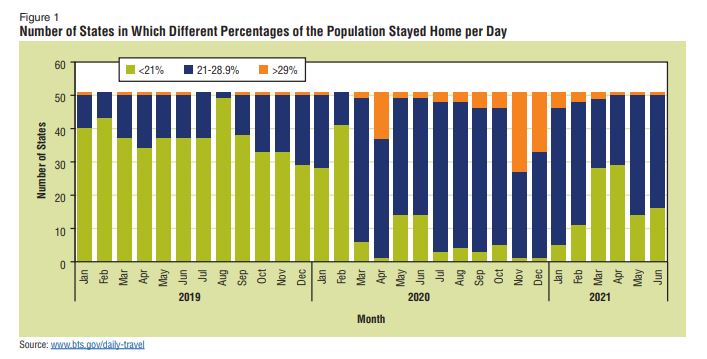 Some of the drivers who remained on the roads during the period of reduced travel engaged in riskier behavior, including speeding, failing to wear a seat belt, driving while impaired, and distracted driving.

Speeding. Average speeds increased during the last nine months of 2020 and driving 20 miles or more over the speed limit became more common. Continuing through June 2021, data analyzed by NHTSA shows that the fastest 1 percent of vehicles continue to drive at speeds faster than those seen in 2019.

Alcohol and drug use. Researchers analyzing blood samples from people who were seriously or fatally injured in motor vehicle crashes from September 2019 to July 2020 determined that “drug prevalence was high among seriously and fatally injured roadway users as a whole before the public health emergency and was even higher during it, especially for alcohol, cannabinoids (active THC), and opioids.” Thomas, F.D., et al., Drug and Alcohol Prevalence in Seriously and Fatally Injured Road Users Before and During the COVID-19 Public Health Emergency, National Highway Traffic Safety Administration (Report No. DOT HS 813 018) (October 2020). They found that drivers showed “significantly higher overall drug prevalence during the public health emergency with 64.7% testing positive for at least one active drug compared to 50.8% before the public health emergency began.” Id. at 4. During the pandemic, drivers in the study tested positive for two or more categories of drugs at a higher rate (from 17.6 percent before the pandemic to 25.3 percent during). Active THC was more prevalent among drivers during the public health emergency than alcohol (32.7 percent versus 28.3 percent), and opioid use among drivers nearly doubled, increasing from 7.5 percent to 13.9 percent.

In addition, self-reported survey data suggested that 7.6 percent of adults were more likely to drive while impaired during the pandemic than before, and wholesale alcoholic beverage sales (an indirect measure of highway safety risk) were higher in 2021 than 2019 and 2020. Continuation of Research at 8.

Distracted driving. NHTSA cited reports from data holders indicating an increasing incidence of phone manipulation while driving during the pandemic. Continuation of Research at 12.

How can these trends be reversed? NHTSA concludes that data gathered during the pandemic provides strong impetus for it and its partners to focus on “known, observable problems” such as the risky driving behaviors mentioned above. Earlier last year, NHTSA published the tenth edition of Countermeasures That Work, a publication that suggests evidence-based countermeasures for these and other traffic-safety problem areas. Venkatraman, V., et al. Countermeasures that work: A Highway Safety Countermeasures Guide for State Highway Safety Offices, 10th edition, July 2020 (Report No. DOT HS 813 097) National Highway Traffic Safety Administration [hereineafter Countermeasures].

For impaired driving, in addition to deterrence through enforcement, NHTSA recommends (1) prevention through reducing drinking and drug use and keeping impaired persons from driving; (2) communications and outreach that informs the public of the dangers of impaired driving and establishes positive social norms that make driving while impaired unacceptable; and (3) treatment to reduce alcohol and drug dependency or addiction among drivers. North Carolina already utilizes all four strategies, and the Statewide Impaired Driving Task Force’s Fiscal Year 2021 Impaired Driving Plan recommends additional changes to beef-up enforcement (expand Standardized Field Sobriety Test training), prevent the operation of vehicles by impaired persons (require ignition interlock for all offenders), communicate to the public (refresh the Booze It & Lose It campaign), and provide treatment (fund additional DWI treatment courts).

Distracted driving is a tougher nut to crack. NHTSA notes that few studies have examined whether the standard behavioral countermeasures of laws, enforcement and sanctions are effective for reducing distracted driving. NHTSA does, however, cite demonstration projects focusing on high visibility enforcement as “show[ing] promise in reducing the use of handheld phones and texting.” In addition, graduated licensing provisions limiting the number of passengers in a vehicle and restricting mobile phone use may help reduce distracted driving in young drivers. Countermeasures at 4-6. Employer policies may reduce job-related distracted driving. Finally, NHTSA notes that rumble strips and roadway improvements (including more visible edge lines, signs, and better lighting) along with collision avoidance vehicle technology have the potential to reduce crashes among inattentive drivers.

These countermeasures are not new, and to some extent already have been widely deployed in North Carolina. Nevertheless, as one industry expert recently put it, if “[t]his all sounds repetitive . . . imagine having to be the agency representative who has to keep telling Americans how to drive safer.” Sebastian Blanco, U.S. Roads in 2021 Are Most Dangerous in a Decade, Says NHTSA, Car and Driver (Sept. 4, 2021).