The Office of Indigent Defense Services (IDS) is studying data related to the disposition of seventeen types of misdemeanor charges during the 2009 fiscal year to determine whether decriminalization of these offenses might be an appropriate way to reduce the cost to the State of providing appointed counsel.  Section 15.17 of S.L. 2009-451 directed IDS to consult with other court system actors regarding means of cutting costs, including the possibility of decriminalizing minor misdemeanor offenses for which jail sentences are rarely or never imposed.  (The bill also directs IDS to study ways to improve the screening and processing of potentially capital cases, but this post focuses on the first directive.)   The following types of charges are to be studied.

Two of these offenses, driving while license revoked and operating a vehicle with no insurance, are Class 1 misdemeanors, punishable by up to 120 days imprisonment.  The rest are Class 2 misdemeanors, with the exception of a first offense of fishing without a license, which is a Class 3 misdemeanor.

Ten of the above offenses are included on the traffic waiver list, and the fishing offense appears on the hunting, fishing, and boating waiver list.  A defendant may resolve a waiver offense without having to appear in court by paying court costs and a designated penalty. Offenses for which court appearances may be waived generally are considered less serious than offenses for which a court appearance is required.

A court appearance currently is required for the following offenses to be studied:

Of course, decriminalizing these offenses does not mean legalizing the conduct they currently regulate.  Instead, any proposal that may result from the study presumably would recommend designating certain offenses as infractions, defined under G.S. 14-3.1 as noncriminal violations of the law.  Because there is no right to counsel at state expense to defend against an infraction, decriminalization presumably would reduce IDS’s costs and result in a savings to the State.

IDS plans to circulate the study results among court system actors to determine whether there is consensus about decriminalizing any of the analyzed offenses.

Editor’s note: Shea provided the document pasted below, in which IDS describes the study 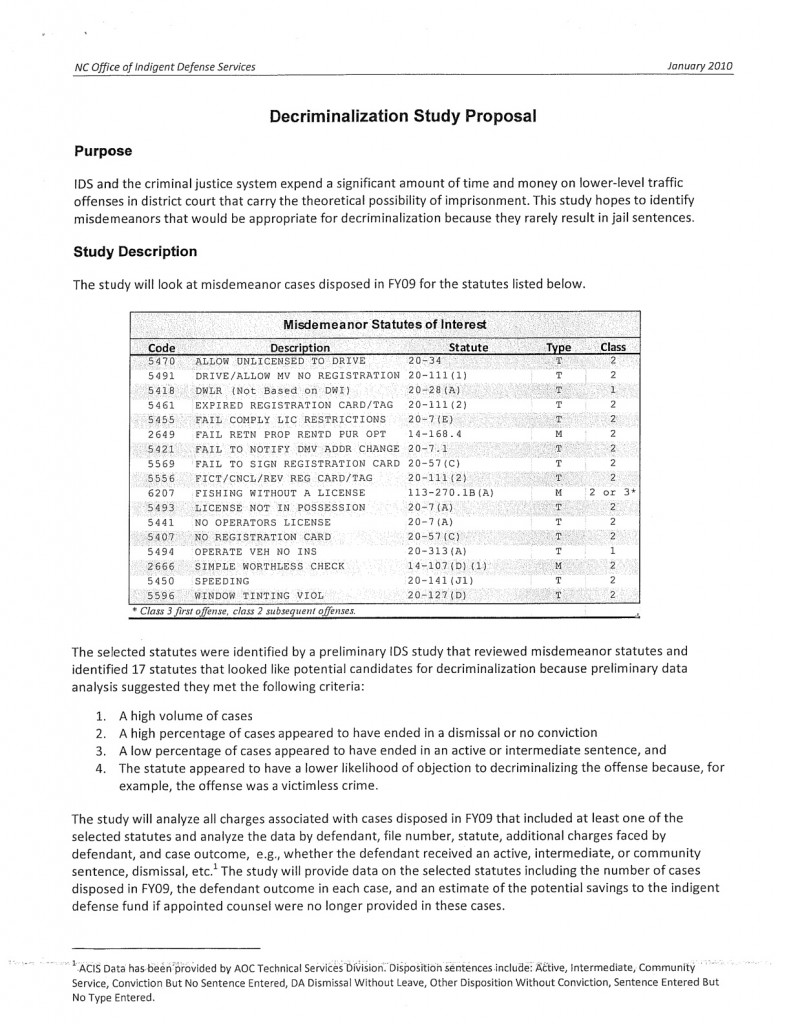