The North Carolina Sentencing and Policy Advisory Commission released last November a report recommending several changes to the state’s impaired driving laws and correctional policies. The report marked the culmination of more than three years of study that included examination of DWI sentencing and correctional data as well as consideration of input from law enforcement, prosecutors, defense attorneys, and providers of substance abuse treatment. The report’s fifteen recommendations address issues ranging from pretrial conditions of release for defendants charged with impaired driving to the place of confinement for defendants serving active sentences. 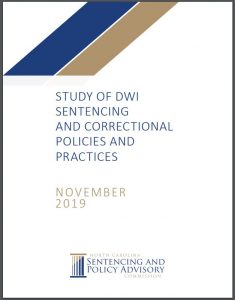 These are the recommendations:

4. Study the idea of a lesser included offense for DWI.

5. Enumerate a mitigating factor for use in DWI sentencing if “the defendant has accepted responsibility for the defendant’s criminal conduct at an early stage of the criminal process.”

7. Authorize an expunction option for DWI Levels 4 and 5 after a guilty plea.

8. Eliminate the requirement that the judge impose a minimum term of imprisonment for DWI offenders.

11. Amend the sentence ranges assigned to the DWI punishment levels in order to reduce the impact of eliminating good time credits.

13. Expand post-release supervision (PRS) to DWI offenders in Aggravated Level One or Level One who receive a sentence of 12 months or more. PRS for DWI offenders should have the following elements:

a. A nine-month period of supervision in the community.

b. Six months of confinement for violation of a condition of supervision; confinement may be imposed in three-month increments for technical violations.

c. The term of supervision and the suspended period of confinement should be added on to the end of the active sentence and pronounced as part of the sentence.

14. Authorize DPS to use delegated authority on DWI offenders who are sentenced to probation.

15. Develop state-run dedicated treatment facilities for housing and providing treatment services to DWI offenders in Aggravated Level One and Level One, as recommended by the Sentencing Commission in its Effective Setting Study.

The recommendations defy categorization as being either tough on crime or oriented toward rehabilitation. While on the one hand they advise eliminating good time and gain time credits, eliminating discretionary parole, and expanding post-release supervision, they also recommend reducing the maximum sentences for Level 1 and 2 DWIs, considering the creation of a lesser-included offense for impaired driving, authorizing a conditional discharge for certain DWI offenses, and allowing low-level DWI convictions to be expunged. The array of recommendations evinces the broad stakeholder input considered by the commission.

What happens next? The commission undertook this work at the request of the Division of Adult Correction and Juvenile Justice and the General Assembly. Several legislators are commission members. It of course remains to be seen whether the legislature will take up any of the commission’s recommendations.

This post is no substitute for reading the full report. Therein you will find reasoned support for each recommendation as well as data considered by the commission. That data includes the results of surveys about pretrial release services and case management practices, the average time to disposition for DWI cases, DWI sentencing statistics by level and type of sentence, and the estimated impact of the proposed changes in sentencing. You can also learn a bit of history. For example, who among our readers remembers when “wet reckless” was a thing?