Correctional statistics have been in the news as we consider the impact of the coronavirus on our jails, prisons, and supervised populations. This week the Secretary of Public Safety announced a decision to extend the limits of confinement for certain categories of inmates under G.S. 148-4 (the general plan is outlined here). That (in conjunction with the existing moratorium on new entries) caused the prison population to fall throughout the week. Advocates continue to push for broader releases. 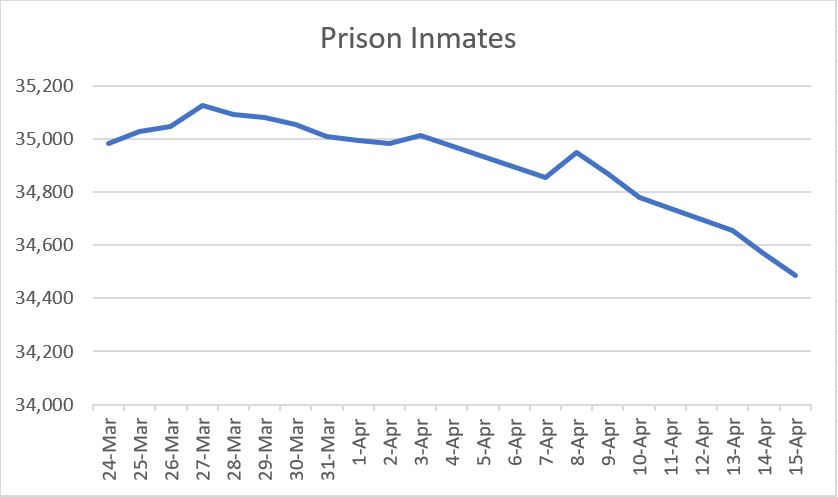 But today’s post isn’t about what’s happening now to get certain inmates out of prison. Instead, it’s a review of the last year’s worth of data on how those inmates got there in the first place. The North Carolina Sentencing and Policy Advisory Commission recently published its annual Structured Sentencing Statistical Report for Felonies and Misdemeanors. Here are the highlights.

Most common grid cell. As usual, Class H/Level II was the most frequently used of the 60 cells on the felony grid. It accounted for 3,264 sentences, which is 11.6 percent. Class A/Level V was used once.

The quietest month for felony sentencing was December. August was the busiest. I’ll go out on a limb and say next year’s report won’t show the same pattern.

After a decade of increases, habitual felon convictions dropped from 1,059 to 935. Breaking or entering and possession of a firearm by a felon tied for the most commonly habitualized offense (they account for 9 percent of all habitual felon sentences each).

Meanwhile, drug trafficking sentences increased from 481 last year to 498 in this year’s report. Both numbers are up from the 452 convictions listed in the 2018 report, which was the last year of data before the law was amended to include opioids. About 15 percent of trafficking convictions were sentenced to probation, indicating that the court found substantial assistance (or made a mistake).

Average probation length. The average length of supervised probation was 25 months for felonies and 15 months for misdemeanors. Both numbers are one month less than the average from last year.

ASR. Advanced supervised release (ASR) was used 123 times, up from 105 sentences last year. As in previous years, the largest number of those ASR sentences were for Class D felonies, where the ASR date can cut literally years off the defendant’s sentence.

The report gets better every year, with new material (like a new section on ten-year trends) that allows for an even closer examination of the data. As always, I thank the Commission staff for its thoughtful and careful work.