With Enactment of SB 255, COVID-19 Emergency Directives Come to an End 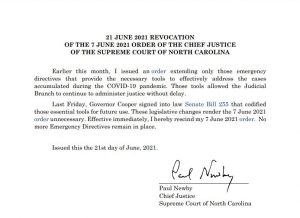 Statutory authorization for remote proceedings. S.L. 2021-47 enacts new G.S. 7A-49.6, which permits judicial officials to conduct proceedings of “all types” using audio and video transmission in which the parties, the presiding official, and any other participants can see and hear each other. There are several requirements for these types of remote proceedings, including the following:

New G.S. 7A-49.6 became effective upon its enactment on Friday, June 18, 2021, and applies to proceedings occurring on or after that date.

Search warrants. G.S. 15A-245(a) was amended in 2005 to allow officers to testify in support of search warrants by videoconference if the senior resident superior court judge and chief district court judge obtained approval of the Administrative Office of the Courts. Before the COVID-19 pandemic and its accompanying emergency directives, my impression is that this authority was seldom used. But after in-person court proceedings were interrupted last year and the authority to conduct remote proceedings was broadened by emergency directive, more judicial officials began to hear remote testimony in support of search warrant applications.

S.L. 2021-47 amends the laws governing the application for and issuance of search warrants in two important ways. First, it amends G.S. 15A-101.1(2), which had excluded search warrants from the types of documents that could exist in electronic form. This is significant because it allows a judicial official to affix an electronic signature to a search warrant, thereby removing the need for the official to physically sign a paper original. Second, the new session law removes the provisions of G.S. 15A-245(a)(3) that allowed law enforcement officers to testify by videoconference if approved.  As rewritten, oral testimony under oath or affirmation in support of a search warrant (by an officer or another witness) may be received pursuant to the remote proceedings generally authorized under new G.S. 7A-49.6.

Similar amendments to G.S. 15A-304(d) permit oral testimony under oath or affirmation in support of a warrant for arrest to be received pursuant to the remote proceedings generally authorized under new G.S. 7A-49.6.

These changes also were effective Friday, June 18, 2021, for proceedings on or after that date.

Other procedural changes. Several other provisions of the criminal procedure act, including the statutes governing first appearance, arraignment and the setting of conditions of pretrial release, were amended to remove the pre-existing authorization for remote proceedings, rendering the covered proceedings subject to the general rule in new G.S. 7A-49.6. Following these changes, even first appearances in capital cases may be held remotely. Again, these changes were effective upon enactment for proceedings held on or after that date.

Verification of pleadings. S.L. 2021-47 also enacted new G.S. 7A-98, which permits unsworn written declarations, signed and dated under penalty of perjury, to be submitted in support of matters that are electronically filed. Exceptions apply for certain declarations, including those made in support of oral testimony, oaths of office, self-proved wills and codicils, and certain real property transactions. New G.S. 7A-98 is effective December 1, 2021.

There is more. As the omnibus bill containing changes related to the administrative of justice, S.L. 2021-47 contains a host of other provisions worthy of digesting, including new G.S. 7A-171.3, which directs the Administrative Office of the Courts to prescribe rules of conduct for magistrates. We will address additional provisions in future blog posts and other publications.

For now, let’s celebrate the completion of my colleague Meredith Smith’s comprehensive chart for emergency directives. May she never, ever have to create another.