A few weeks ago, I had the privilege of welcoming our new colleague Brittany Williams to the School of Government. Today, I have the honor of announcing another colleague’s return to the criminal law fold.  After more than two decades of serving as an administrator at the School – most recently as the School’s Senior Associate Dean — Tom Thornburg has returned to traditional faculty work, where he will focus on magistrates and their needs in the area of criminal law and procedure. Tom will work closely with our colleague Dona Lewandowski, whose work focuses on magistrates’ civil responsibilities. 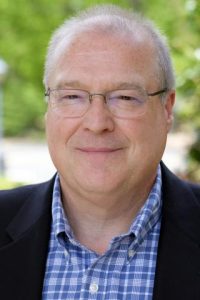 Tom is no stranger to this field. He joined the School’s faculty in 1990, working in criminal law and procedure, mostly with superior court judges and magistrates. His work then included editing and revising the 4th edition of North Carolina Crimes, teaching criminal law and procedure to magistrates and wildlife officers, serving as staff to the Commission for the Future of Justice and the Courts in North Carolina, coordinating structured sentencing implementation training for court officials, and working closely with the Department of Correction and the NC Post-Release Supervision and Parole Commission on policy issues.

Even after becoming an administrator, Tom kept his hand in criminal justice matters. He served 15 years as a Commissioner of the NC Criminal Justice Education and Training Standards Commission, including four years as the chair of its Planning Committee. He also served as Director of the North Carolina Judicial College from 2011 to 2015.

Tom says that at the current moment he “feel[s] long on administrative skills and short on substantive knowledge.” But I have no doubt based on Tom’s history at the School and my experiences in working with him that his runway to get up to speed will be a short one.

Tom’s telephone number is (919)-966-4377, and his email address is thornburg@sog.unc.edu. We are delighted to have him back in the portion of the building we affectionately call the “Hall of Justice.”