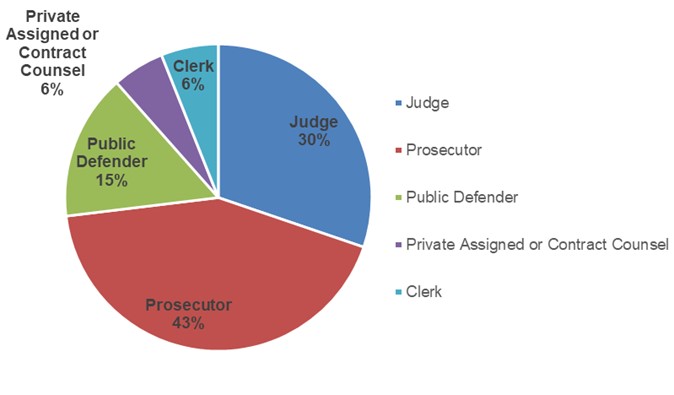 Our full report is available here. In this post we summarize some top line results.

Change in Use of Virtual Proceedings.

Table 1. Proceedings Conducted Virtually Before and During the Pandemic

*Other than at first appearance

Our full report details advantages cited by respondents with respect to each of the proceedings listed in Table 1. Across all types of virtual proceedings, however, the most commonly reported advantages were increased efficiency, increased safety, and alleviated transportation needs.

With respect to safety, respondents primarily noted reduced risk of exposure to COVID-19; frequently including statements about “social distancing”, “reduced interactions with people”, and “limiting exposure”. For proceedings that involve in-custody defendants, respondents were especially concerned about the spread of COVID-19 between the courtroom and jail. Some also noted safety advantages of virtual proceedings beyond COVID-19 considerations, including alleviating risks of physical or mental harms for court actors, defendants, or victims.

Our report details concerns cited by respondents with respect to each of the proceedings listed in Table 1. Across all types of virtual proceedings, however, the most common identified concerns were problems with effective communication generally, Sixth Amendment right to counsel issues, lack of access to necessary technology, and inefficiency.

Respondents frequently reported that conducting proceedings virtually would inhibit effective communication between court participants. This was primarily linked to the importance of non-verbal communication, which participants were concerned would not translate well virtually. One respondent stated, “The ability to read body language, facial expressions, etc. are probably needed.” Another agreed saying, “I trust in the powers of observation and I am not confident that remote hearings can adequately convey information.” Additionally, many respondents related the importance of non-verbal communication to assessing credibility of witnesses and defendants.

Respondents also had concerns about defendants’ understanding of virtual proceedings. They were concerned that defendants would not fully understand information presented to them, their rights, and/or what is required of them. Further, respondents expressed concern that defendants would be unwilling or unable to ask clarifying questions. One respondent expressed the concern that “the client may feel marginalized by being left out of the actual court room.” Respondents also were concerned that conducting proceedings virtually would “allow the defendant to be dehumanized.” One person stated, “the judge may be more willing to hand down a harsh sentence without the physical presence of the accused.”

Finally, many respondents indicated that it would be too easy for participants to be distracted during virtual proceedings. Respondents were concerned that court participants would be “not as present” or “zoned out”. These responses frequently cited potential distractions that could be present in virtual proceedings, such as “dogs barking”, “a package delivery”, “play[ing] a game on [the] computer”, or “family around talking.”

Many respondents indicated concerns about defense attorneys’ ability to communicate effectively and confidentially with their clients both before and during virtual proceedings. Examples of these comments include:

For proceedings in which defendants do not yet have an attorney, respondents were concerned about the timeliness of defendants being able to connect with counsel. Respondents also were concerned about defendants’ understanding of their right to counsel and their ability to initiate contact with appointed counsel. One respondent stated, “a defendant, being confused, declines counsel, simply because there is no attorney present to signal that this may be a disadvantage to him.” Respondents were concerned that virtual proceedings would delay contacts between defendants and counsel because of issues “getting attorney information to the client” and because “[the] inmate does not have immediate access to their assigned attorney”. Another respondent echoed this concern, stating that they were not sure how the defendant would receive their attorney’s contact information because “getting the phone numbers and addresses to the defendants would normally be done in person by handing them a business card.”

Respondents also were concerned about lawyers’ ability to speak privately and confidentially with defendants during virtual proceedings, noting that attorneys often need to clarify or discuss issues with their client and remind them what they should (or should not) say in court. One stated, “Having the attorney and the defendant in a separate place concerns me during the proceeding in case there are any questions or the defendant needs to speak with his/her attorney confidentially.” Further, even if the attorney is able to speak with their client virtually, respondents expressed concerns that the communication would not be private. One respondent indicated that “the telephone really does not work well when the attorney is in the courtroom” and that they were “not sure how much privacy the defendant has on the jail end of the phone.” Additionally, many respondents indicated the importance of smaller, more immediate attorney-client communications, particularly to nudge or inform defendants regarding what to say or withhold during proceedings. One respondent stated, “it’s hard [for] an attorney to jump in and provide advice if a person is saying things they shouldn’t or if something happens that shouldn’t.” Another stated that attorneys often “spend a lot of time interrupting defendants and reminding them not to talk about their case on video”.

Respondents frequently expressed concern about the ability to access and use the technology needed to conduct effective virtual proceedings. They voiced concerns about access to good technology and equipment, as well as the potential failure of the necessary technology.

Respondents expressed concern about the “widespread availability of technology”, noting that certain jurisdictions may not have the necessary equipment and that people outside of the courtroom may not have access to the required technology. Respondents also frequently indicated that victims, family members, and the public do not have access to the technology needed to attend virtual proceedings. Additionally, respondents expressed concern that, even if the jurisdiction has the appropriate technology, people did not have the proficiency needed to operate it.

Many respondents expressed concern about technological issues or failures during virtual proceedings. One respondent stated that courts “do not have the IT infrastructure to conduct these hearings virtually”, and another indicated that they were “very concerned that technology would not work right and that could cause constitutional issues.” Respondents indicated concern about multiple technological issues, including “technological glitches”, “feedback issues”, “sound [going] in and out”, and “dragging internet”. Concerns about technological failure were amplified by participants’ own experiences with technology issues during virtual court proceedings:

Although many respondents identified increased efficiency as a benefit of virtual proceedings, many thought otherwise, indicating that virtual proceedings would be less efficient than in-person ones. These concerns were primarily voiced regarding logistical aspects of court processing, particularly completing and filing necessary paperwork. Some respondents also expressed concern that setting up virtual court proceedings and transitioning between cases would take more time than if proceedings were conducted in-person.

Other reported concerns about virtual proceedings included enforcement of judicial orders, increased likelihood of appeals, and perceived legitimacy of proceedings.

Sarah Duhart Clarke, PhD student at North Carolina State University, is a co-author of the report, and contributed to this blog post.