A new report evaluates the impact of Mecklenburg County’s bail reforms. Cindy Redcross et al., MDRC Center for Criminal Justice Research, Evaluation of Pretrial Justice System Reforms That Use the Public Safety Assessment: Effects in Mecklenburg County, North Carolina (2019) [hereinafter Evaluation]. The big take away? Mecklenburg released more defendants but did not see a significant increase in failures to appear (FTAs) or new criminal charges during the pretrial period. Id. at 2. Read on for details.

Mecklenburg County has been on the forefront of bail reform in North Carolina. One reform implemented there is use of an empirical pretrial risk assessment tool. Specifically, in 2014 Mecklenburg County started using the Public Safety Assessment (PSA) risk assessment tool to better inform pretrial decision-making. Evaluation at 4 (until 2014, Mecklenburg had been using the Virginia Pretrial Risk Assessment Instrument). The PSA uses nine factors from a defendant’s history to produce two risk scores: one representing the likelihood of a new crime being committed and another representing the likelihood of a FTA. Id. at 2, 3. The PSA also indicates if the defendant has an elevated risk of a violent crime. Id. (More information on the PSA is available here). Mecklenburg County uses PSA risk scores in connection with a county-developed decision-making framework (DMF) that provides a pretrial release recommendation. Under the DMF, release conditions become more restrictive as PSA risk levels go up.

In Mecklenburg, pretrial services staff generate PSA scores and produce recommendations based on the DMF in connection with the first appearance held before a judge, which typically occur on the business day after a defendant is booked into jail. Evaluation at 11. The PSA is not used at the initial appearance before the magistrate. Id. Around the same time that Mecklenburg implemented the PSA and accompanying DMF, it also implemented other policy changes. The report assesses the impact of Mecklenburg’s basket of reforms.

How to Read the Report. Research findings were reported in time-series figures, some of which are included below. Each figure includes a period before and after implementation of the reforms; the post-implementation period is shown in the gray areas to the right of the figures. Id. at 7. The dark black lines represent the observed monthly rates of the item being examined. Id. Researchers used observed rates for cases in the period before implementation to generate a time trend model, resulting in predicted rates in the post-implementation period, shown with gray lines in the shaded areas of the figures. Id. The estimated effect of the reforms is the difference between the black observed line and the gray predicted line. Id. The blue shaded area above and below the predicted line represents the confidence band around the predicted estimates. Id. With that background here are the high level research findings from the study: 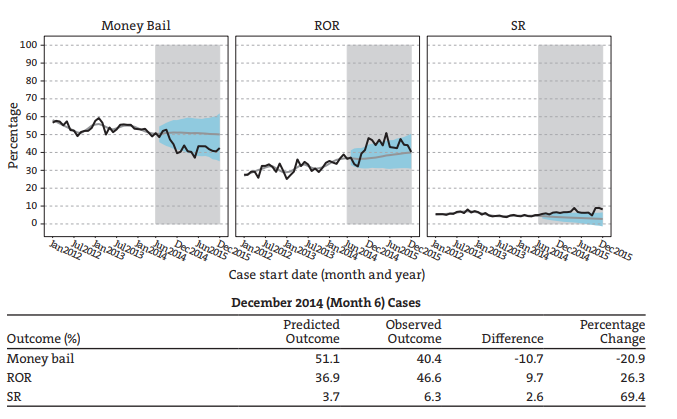 The release decisions shown in this figure represent the last known decision in the case, which could have been made at the initial appearance, first appearance, or subsequent bond hearing. Id. at 13.

Effects on Pretrial Detention. For effect on pretrial detentions, researchers looked at initial detentions after arrest and the number of days of detention for that arrest. Id. at 18. As shown below, they found that post-implementation the rate of initial detention fell sharply from a predicted outcome of 73% to an observed outcome of 63%, although there was a good deal of uncertainty in the statistical model. Id at 18-19. Researchers also examined cases that had initial detentions longer than 2, 10, and 30 days. Id. at 19. Six months after the changes, defendants in 45% of cases were detained for two or more days, about six percentage points less than predicted. Id. Researchers found little to no difference from predicted trends in the proportion of defendants detained more than 10 or 30 days. Id. They further found that the changes did not have an effect on the number of days that defendants were detained pretrial. Id. at 20. 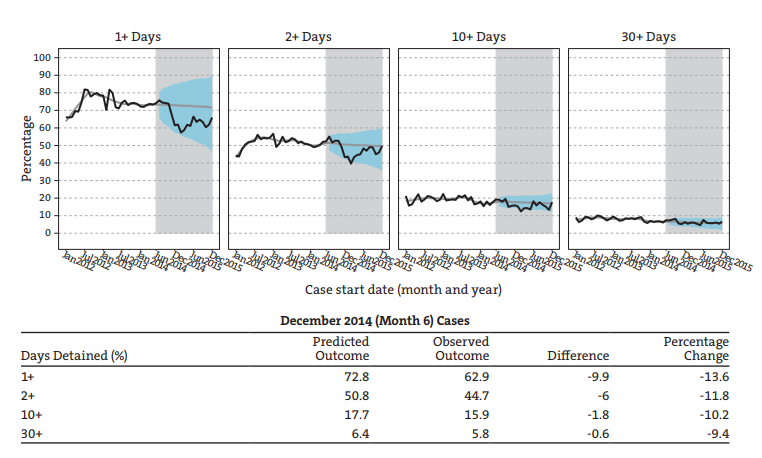 Effects on Case Outcomes. As shown below, researchers found a small reduction (four percentage points vis-a-vis predicted rates) in cases that resulted in guilty findings, with a comparable increase in cases that were dismissed or for which there was a not guilty determination. Id. at 25. Researchers hypothesized that because more defendants were released pretrial, they may have had less incentive to plead guilty to get out of jail. Id. at 2. 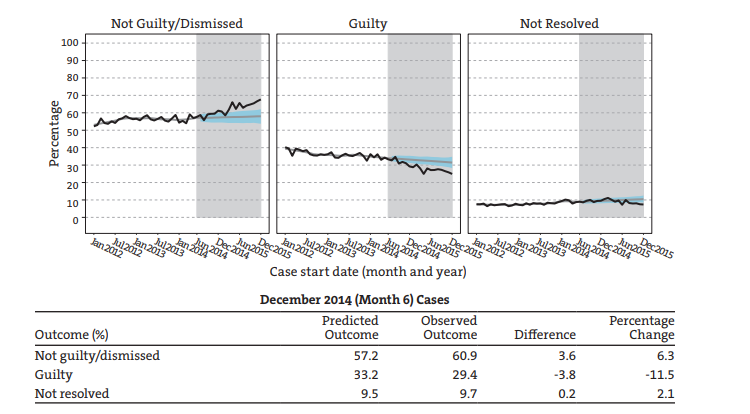 Effects on Court Appearances and New Criminal Charges. Obviously this is an important issue; one concern in conversations about bail reform is that as more defendants are released pretrial there may be significant increases in FTAs and new criminal activity during the pretrial period. Id. at 27. Researchers, however, found those concerns to be largely unrealized in Mecklenburg County. As shown below, researchers found that although the changes increased the number of people released pretrial, they did not have an impact on the number who showed up for their court appearances. Id. at 28. 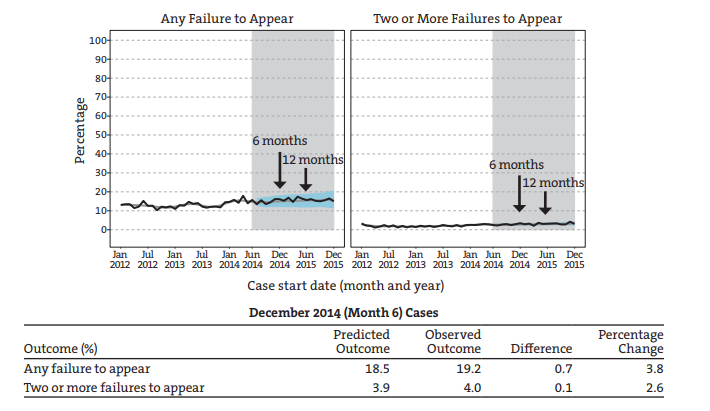 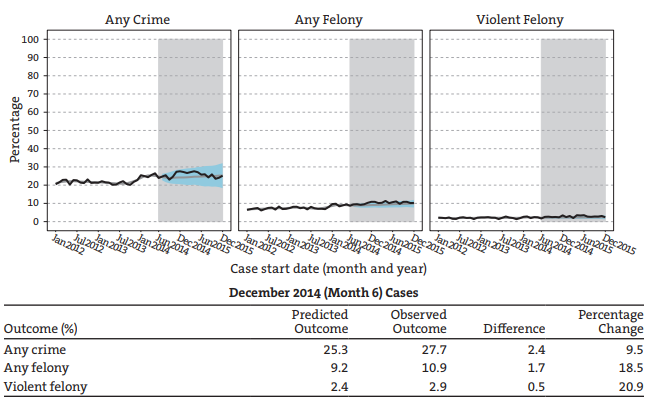 More Detail. There is more to the report than this quick summary; I’ve included a link to the report above for those who want to dig in deeper into the study and its limitations. Also, a companion report (here) examines the role of risk assessment in decision-making and effects of the changes on racial disparities in case and crime outcomes. Id. at 35. Regarding racial issues—a hot button topic with respect to risk assessment—the companion report concludes that the changes had “no effect on racial disparities” in Mecklenburg’s system.

My Thoughts. With the caveat that I’m not a social science researcher, this strikes me as an important study. First, it shows that bail reform can reduce pretrial detentions without significant impacts on FTAs and public safety. Second, although not a focus of the report, it provides additional evidence that most defendants appear as required. Specifically, the study notes that before and after the policy changes, 80% of arrested defendants made all of their court appearances. Id. at 27. It further found that fewer than 4% of defendants missed two or more court appearances. Id. at 28. This is important because it suggests that FTAs are not as great a risk as many assume.

My issue with the report is that researchers looked at the basket of Mecklenburg reforms—both the use of the PSA and related changes to policy and practice. The report doesn’t specify what the latter changes were and doesn’t parse how they impacted the metrics examined. It does however suggest the limited impact of the PSA itself. Specifically, most of the changes in pretrial conditions occurred at the initial appearance before the magistrate, where the PSA wasn’t used. Id. at 2. Thus, something else—perhaps one or more of the changes in practice and policy—caused those impacts. As I work with jurisdictions across the state on bail reform, this lack of parsing out of impact makes it hard to know what to replicate, especially when so many North Carolina jurisdictions lack pretrial services and the ability to implement a risk assessment instrument. But where there is a problem there’s usually an opportunity. Here, it’s for more research.