In Jeff’s recent announcement of the new version of the ASSET smartphone app, he mentioned that we would release another app soon. I’m pleased to report that our second app, a handheld guide to sentencing and corrections after Justice Reinvestment, is available now. It was created primarily as a field reference for probation officers, but I think others will also find it useful. The app is available here in the Google Play store.

The app is available only for Android devices. That is because it was funded through a grant from the North Carolina Department of Public Safety, and all probation officers use state-issued Android phones. Thank you to NCDPS, the U.S. Department of Justice, and the Council of State Governments for their support. Of course, if anyone is interested in funding a version for iPhone, let me know!

True to the adage that imitation is the sincerest form of flattery, the app’s user interface is virtually identical to ASSET—it is searchable, bookmark-able, and virtually all of the content is available for offline viewing. The substantive content was largely derived from my book on the Justice Reinvestment Act, but also goes beyond the book by including a section with searchable answers to over 60 frequently asked questions on the law. Those without an Android device who would like to review the FAQs may do so here. Thank you to attorney Christopher Tyner for his help working on that list and other aspects of the app.

I hope you’ll take a look at the app and let us know what you think—especially through ratings in the Google Play store itself. We’re still in the early stages of our experimentation with apps and want to learn more about how they fit with your work. 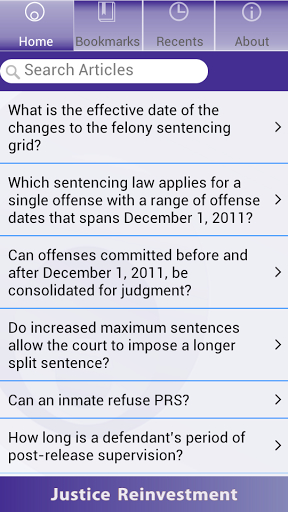