Should Prosecutors Change the Way They Work?

Advocates of criminal justice reform have called for numerous policy changes in recent years, including raising the age of juvenile jurisdiction, eliminating or reducing reliance on money bail, decreasing monetary penalties for poor defendants, ending license revocations as a sanction for failing to appear for court or pay monies owed, and abandoning mandatory minimum sentencing. Many have also advocated for a re-examination of the role of the prosecutor, suggesting that prosecutors could better channel their power and discretion to lessen racial disparities, reduce recidivism, rehabilitate offenders, and cut rates of incarceration. Two reports published last December focus on this re-envisioned prosecutorial function. The first, 21 Principles for the 21st Century Prosecutor, suggests practical steps that prosecutors can take to reduce incarceration and increase fairness. The second, Prosecutorial Attitudes, Perspectives, and Priorities: Insights from the Inside, explores what prosecutors in four prosecutorial districts think about definitions of success, office priorities, community engagement, and racial disparities.

21 Principles. This report was issued by Fair and Just Prosecution, with support from the Brennan Center for Justice and The Justice Collaborative.  All of these groups are, broadly speaking, advocates for criminal justice reform. The report’s recommendations are divided into two parts. The first ten recommendations are strategies designed to reduce incarceration. The next eleven are aimed at increasing fairness. Each recommendation is stated in broad terms, such as “Make Diversion the Rule,” followed by more specific examples such as “Don’t require defendants to admit guilt to participate if an admission isn’t needed to promote the goals of the program.” 21 Principles at 4. For every recommendation, an example of implementation is cited. In the diversion example, Washington, D.C.’s diversion program for teenagers who commit offenses like vandalism and shoplifting is cited along with information about its success:  In the program’s first two years, more than 90 percent of its participants were not rearrested. 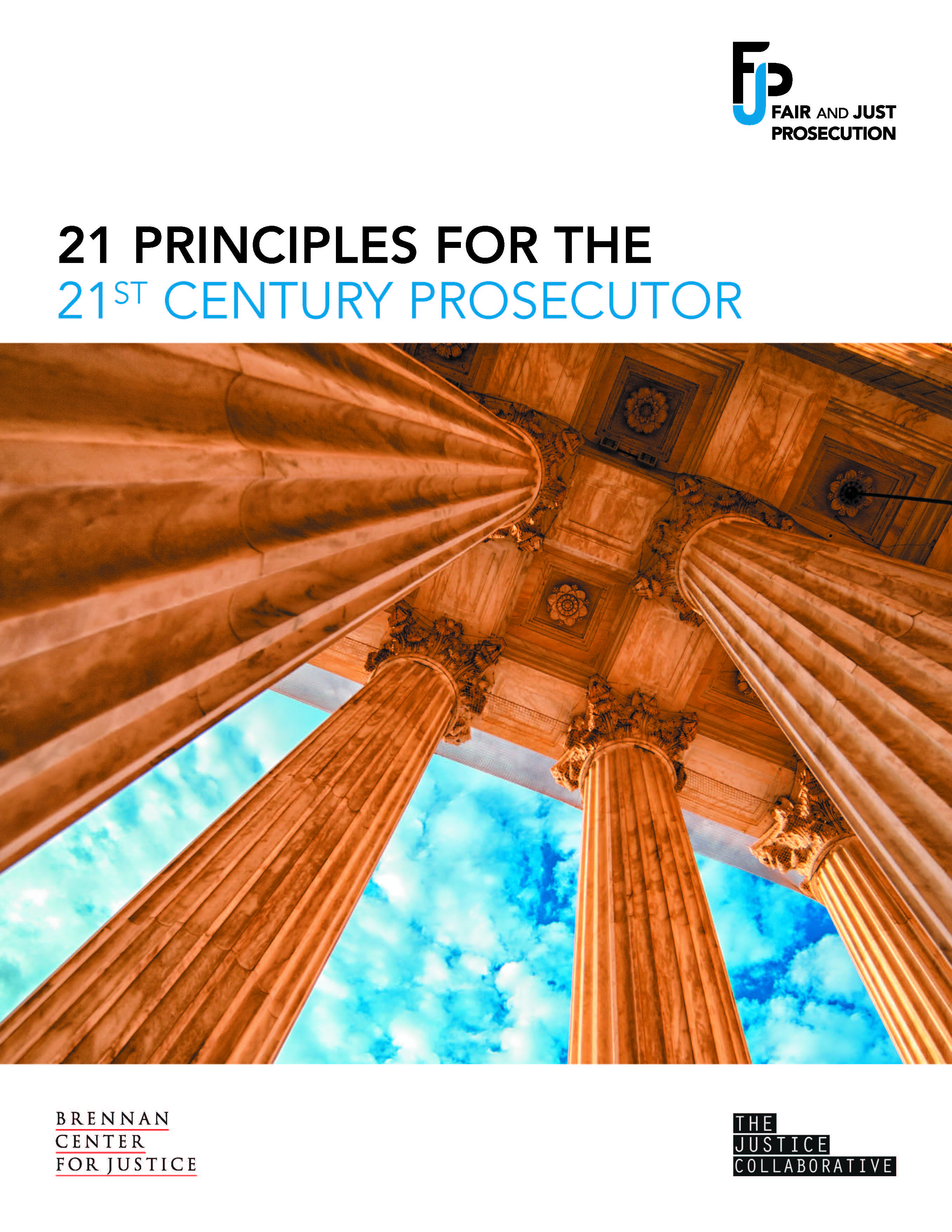 Many of the recommendations echo those made by other advocates for reform:  “Move Toward Ending Cash Bail,” “Treat Kids Like Kids,” and “Shrink Probation and Parole.” Some of the ideas are, however, more prosecutor-specific and less often repeated.

Charge with restraint.  Among the strategies to reduce incarceration is a suggestion that prosecutors “Charge with Restraint and Plea Bargain Fairly.” Id. at 5. The authors discourage the practice of filing the maximum possible charge as a matter of course (a practice discussed in some detail in Episode 5 of Serial Season Three, a podcast that chronicles several criminal prosecutions in Cleveland, Ohio). The report also recommends that prosecutors consider collateral consequences in plea discussions, such as the impacts on a defendant’s immigration status. Jeff Welty polled blog readers about that issue in 2017.  An overwhelming majority of respondents in that (admittedly unscientific) poll said that prosecutors should consider such consequences when making decisions about charging and dispositions. The 21 Principles report cites policies adopted by lead prosecutors in Seattle and Philadelphia as example implementations of the recommended approach.

Treat mental illness. Another recommendation is to “Encourage the Treatment (Not Criminalization) of Mental Illness.” Id. at 7. The report characterizes jails and prisons, rather than hospitals, as “America’s largest psychiatric facilities.” Id. Among the specific recommendations is support for crisis-intervention training for law enforcement officers. The idea is that properly trained officers can de-escalate situations involving people with mental illnesses, reducing the likelihood that force will be used or a mentally ill person will be arrested. Another recommendation is screening cases before charging to identify people in need of mental health services and support. An officer training program in Miami-Dade County is cited as an example. Officers are trained to respond to people in crisis and have the authority to divert people to treatment instead of jail.  When people are arrested and jailed, they are screened for signs of mental illness. If they need acute care and are charged with misdemeanors or low-level felonies, they are transferred to a community-based crisis stabilization unit within 48 hours.  If they complete the treatment for which they are eligible, the charges against them may be dismissed or modified.

Change office culture. On the increase fairness front, the report recommends, among other strategies, that prosecutors “Change Office Culture and Practice.” Id. at 14. Prosecutors can do that, the authors state, by “[c]onducting mandatory trainings on issues like implicit bias, debunked forensic methods, false confessions, and witness identification.” Id. The report also suggests that prosecutors hire “a diverse staff across all levels of seniority and report on staff diversity.” Id. It further recommends that lead prosecutors encourage their staff to engage in community outreach, which might include coaching sports teams, speaking at schools, mentoring at-risk youth, or setting up local storefronts.

Address racial disparity. The report cites research by UNC Professor Frank Baumgartner on traffic stops in North Carolina as support for its assertion that “racial disparity exists as every stage of the justice system.” Id. at 15. The authors recommend that prosecutors track and release race and gender data for their actions, including transfers of juvenile cases, charging decisions and plea bargains. They encourage prosecutors to work to reduce racial disparities resulting from law enforcement practices. The reports cites the approach Milwaukee District Attorney John Chisholm took after discovering a higher rate of prosecution for black defendants charged with possession of drug paraphernalia: “[C]hisholm stopped prosecuting most paraphernalia cases, instead referring people to treatment programs. The rate of prosecution for the remaining cases equalized for black and white defendants.” Id. at 16. 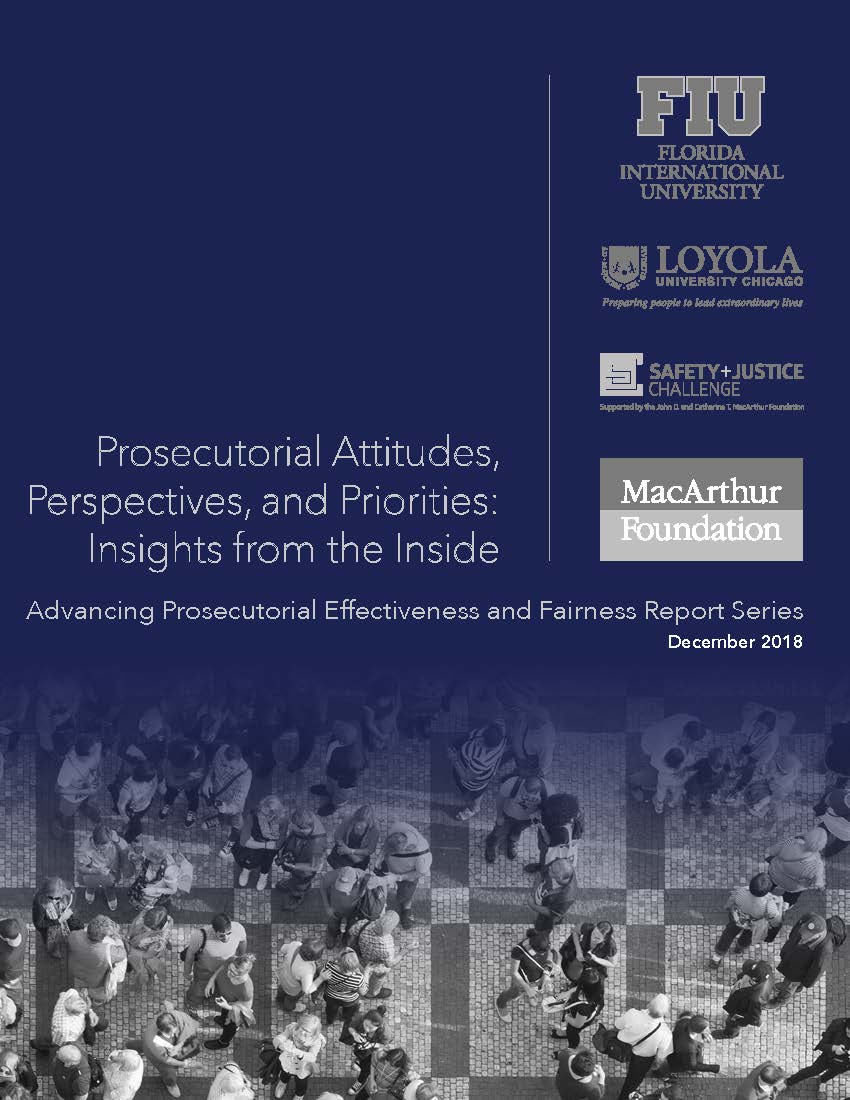 The Prosecutorial Attitudes report. The Prosecutorial Attitudes report was written by professors and researchers at Florida International University and Loyola University Chicago, and is the first in a series. This initial report expresses themes gleaned from interviews of prosecutors in four offices—Jacksonville, Florida; Chicago, Illinois; Tampa, Florida; and Milwaukee, Wisconsin—regarding their thoughts on definitions of success, office priorities, community engagement, and racial disparities. Subsequent reports will focus on racial and ethnic disparities and prosecutorial performance indicators. When I read this report in connection with 21 Principles, a few of the identified themes stood out.

First, some prosecutors are skeptical about community involvement. The authors summarized the sentiments of prosecutors in Jacksonville, Florida this way:

There is little acknowledgement that community prosecution strategies for identifying and addressing crime problems could be a valuable form of community engagement. Instead, prosecutors view community engagement as a tool for improving more traditional, reactionary functions of the office, such as achieving case convictions. Community members are seen more as potential victims and witnesses than as potential problem-solving partners.

The report makes similar observations about the views of Tampa prosecutors on community involvement. Prosecutors in Chicago and Milwaukee, in contrast, place higher value on community engagement.

Why these reports matter. Not everyone agrees that the role of the prosecutor should change. Nevertheless, it is clear that change is afoot. Several of the recommendations made in the 21 Principles report already have been implemented in North Carolina, including restorative justice programs, graduated responses to probation violations, and open-file discovery. The reports discussed in this post outline the perspective of many advocates for reform and set guideposts that reform-minded prosecutors may follow. Whether one ascribes to these viewpoints or not, it is helpful to be informed about the impetus for change, proposed models for reform and their rates of success, and the perspectives of prosecutors who carry out the important work of “addressing violations of criminal law and promoting public safety.” 21 Principles at 3.