Last week, the North Carolina Sheriff’s Association released a 31-page Report on Law Enforcement Professionalism recommending numerous law enforcement reforms. The report, created by a working group formed after the killing of George Floyd and the public outcry for policing reform that followed, is part of “an effort to create a law enforcement profession that will not tolerate racism and excessive force by law enforcement, and that will hold North Carolina law enforcement to a high standard.” (Report at 5.) Changes are recommended for officer certification and de-certification, training, agency accreditation, use of force policy and data collection, and recruiting and retention. The document, which, among other things, contains the most comprehensive description of the training and education requirements for law enforcement officers I’ve ever seen, is worth reading in its entirety. This post focuses only on one aspect of the report: recommendations that would enable hiring authorities, certifying commissions and state prosecutors to learn of misconduct by officers, including untruthfulness, that would impair the officer’s credibility as a witness in criminal prosecutions and which must be disclosed to the defense. 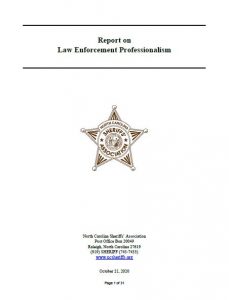 First, some background. A prosecutor must, consistent with the constitutional guarantee of due process, disclose evidence materially favorable to the accused. The kind of evidence that must be disclosed typically is referred to as Brady material, adopting the name of the U.S. Supreme Court case in which the due process requirement was identified, Brady v. Maryland, 373 U.S. 83 (1963). This disclosure requirement applies to exculpatory evidence and to evidence that the defense might use to impeach a government witness by showing, for example, bias, interest or lack of credibility. This latter type of evidence frequently is referred to as Giglio material, adopting the name of the first U.S. Supreme Court case to apply the disclosure requirement to evidence relevant for purposes of impeaching a government witness, Giglio v. United States, 405 U.S. 150 (1972).

Evidence of misconduct by an officer, even in an entirely different case, may qualify as Giglio material. Thus, for example, the United States Court of Appeals for the Ninth Circuit concluded in Milke v. Ryan, 711 F.3d 998 (9th Cir. 2013), that prosecutors violated the defendant’s constitutional rights when they failed to turn over impeachment evidence about the government’s key witness, a police detective, including a personnel record documenting a five-day suspension for accepting sexual favors from a female driver and then lying about it as well as court orders from state judges who had taken action against the prosecution in numerous cases because of the detective’s false statements and constitutional violations he committed during interrogations. As the United States Court of Appeals for the Second Circuit put it in United States v. Kiszewski, 877 F.2d 210 (2d Cir. 1989): “Impeachment of a witness can make the difference between acquittal and conviction.” Id. at 216 (noting that this maxim is “particularly true in a trial for making false declarations, where credibility is the central issue in the case and the evidence presented at trial consists of opposing stories presented by the defendant and government agents”).

Duty to learn. An individual prosecutor has a duty to learn of any favorable evidence known to others acting on the government’s behalf in the case, including law enforcement officers. Kyles v. Whitley, 514 U.S. 419, 438 (1995). A Brady/Giglio violation may occur even if the prosecutor’s failure to disclose the evidence is inadvertent. Strickler v. Greene, 527 U.S. 263, 288 (1999) (“[U]nder Brady an inadvertent nondisclosure has the same impact on the fairness of the proceedings as deliberate concealment.”); United States v. Agurs, 427 U.S. 97, 110 (1976) (“If the suppression of evidence results in constitutional error, it is because of the character of the evidence, not the character of the prosecutor.”). Thus, regardless of whether law enforcement officers working on a case inform a prosecutor about Brady/Giglio material, prosecutors have an independent duty to discover that information. They may carry out that duty by establishing procedures and regulations, such as communication between prosecutors in the same office or requests to law enforcement to provide all statements, interviews, reports, and other documents and evidence related to a particular case. See Kyles, 514 U.S. at 438. That said, the constitution does not require prosecutors to thoroughly investigate the State’s investigators.

Interviews and background checks of officers are not required. The Fourth Circuit in United States v. Robinson, 627 F.3d 941 (4th Cir. 2010), noted that courts “have routinely refused to extend Brady’s constructive knowledge doctrine where doing so would . . . require prosecutors to do full interviews and background checks on everyone who touched the case.” Id. at 952. There’s a good reason for that refusal, according to Robinson:

[I]t is one thing to require prosecutors to inquire about whether police have turned up exculpatory or impeachment evidence during their investigation. It is quite another to require them, on pain of a possible retrial, to conduct disciplinary inquiries into the general conduct of every officer working the case.

Thus, on the facts at issue in Robinson—the affected officers and the prosecutors worked across state/federal lines, no one other than the officers themselves knew of the impropriety until after the defendant’s trial, and where the misconduct evidence was unrelated to the investigation of the defendant—the court held that the principle of imputed knowledge did not apply.

Prosecutors likewise may not be required to uncover such material when it exists in officers’ personnel files. (Though confidential, personnel files may be inspected by a state official when necessary and essential or as ordered by a court. See G.S. 126-24; 153A-98(c)(5); 160A-168(c)(4)). In State v. Smith, 337 N.C. 658 (1994), the North Carolina Supreme Court held that the trial court properly denied the defendant’s motion for disclosure of impeaching information including documentation of any internal investigation of any law enforcement officer who the State intended to call to testify at trial. Defense counsel told the trial court at a hearing on the motion that he had hearsay information concerning possible discipline the chief investigator may have received as a result of an internal affairs investigation prior to his current employment with the Halifax County Sheriff’s Department. The trial court denied the defendant’s request for disclosure and refused to order the State to inquire into the background of its witnesses. The defendant was convicted and appealed, arguing, in part, that his specific request for discovery triggered the State’s duty to determin­­­e if such impeachment evidence existed and, if so, to disclose it. The state supreme court disagreed, stating in part that “the State is not required to conduct an independent investigation to determine possible deficiencies suggested by defendant in State’s evidence [as] [s]uch exploration could result in time being wasted on frivolous fishing expeditions not necessary to the State’s prosecution of the charges against defendant.” Id. at 664. The defendant’s motion was, in the state supreme court’s view, “nothing more than a fishing expedition for impeachment evidence.” Id.

Brady/Giglio and death letters. When a district attorney does learn of misconduct, including untruthfulness, by an officer that must be disclosed to one or more defendants, the district attorney sometimes elects to issue a Brady/Giglio letter to the officer’s employer. Such letters recount the misconduct and advise of the prosecutor’s obligation to provide the information to defendants in cases in which the officer is likely to testify. If the misconduct is sufficiently egregious, the district attorney may determine that the officer is disqualified from testifying at all. Brady/Giglio letters issued in these circumstances are referred to as “death letters.” There currently is no requirement that the issuance of a Brady/Giglio or death letters be reported to the state commissions that certify and decertify officers nor is there any formalized administrative process for maintaining such information.

The upshot. Given that prosecutors are not obligated to independently investigate the officers prosecuting a given criminal case, it is possible for misconduct by officers to remain undetected and undisclosed. Even when misconduct is detected, an officer may resign, maintaining his or her certification, and be hired by an agency in a different jurisdiction, where neither the agency nor the local prosecutor’s office is likely to be apprised of the previous misconduct.

More to digest. As I noted at the outset, there are many other portions of the report worth discussing. Perhaps we will unpack additional recommendations in future posts. We will certainly stay tuned to see whether the legislature takes up any of the report’s suggestions when it returns next year.