Sharks, Minnows, and the Drug War

What make this study different? The study examined drug arrest information from the National Incident Based Reporting System (“NIBRS”) for 2004, 2008, and 2012. It reviewed state and local, not federal, law enforcement agencies and cases in which an arrest was made. While participation among states (and even within a participating state) is far from uniform, 37 states contribute to the NIBRS database (North Carolina does not). The resulting data encompasses around “30% of the U.S. population and 28% of all reported crimes.” Id. at 10. The data included more than a million drug arrests, “making this study the most comprehensive study of drug arrest data undertaken to date by orders of magnitude.” Id.

What was excluded from the study? The analysis excluded cases where there was no measurement of drug quantity, as well as cases with drugs not measurable by weight. As the study notes, the vast majority of drugs are sold by weight. Once these exclusions were applied to the original data set, more than 700,000 cases remained, representing 82% of drug cases within the database with a known measurement during the years examined.

What drugs result in arrest? Marijuana arrests far outnumber all other drug arrests combined, clocking in at 71% of all drug arrests. The authors observed, “[O]ur war on drugs is primarily a war against marijuana.” Id. at 15. Of the remaining drug arrests, nearly half are for cocaine (whether crack or powder), while 6% involved amphetamines and 3% involved heroin (the final 3% was for “other”). The authors include a helpful chart: 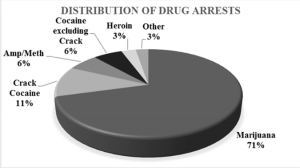 What’s the typical amount involved in a drug arrest? Most arrests for “hard” drugs are for quarter of a gram or less amounts: this quantity supplies 45% of arrests for crack cocaine; 44.1% of heroin arrests; 43.6% of amphetamine arrests; and 37.6% for cases involving powder cocaine. Further, the authors found that arrests for one gram or less of hard drugs “account for somewhere between three-fifths and two-thirds of all hard drug arrests.” Id. at 16. Marijuana is a bulkier substance, typically sold in higher weights, but the amounts are still relatively small: over two-thirds of marijuana arrests are for less than five grams. Id. In chart form, those numbers look like this: 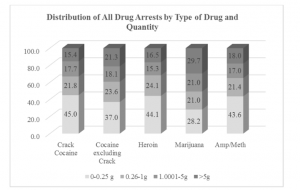 At the other end of the spectrum (not specifically shown in the above chart), drug arrests for hard drugs involving more than a kilogram were less than one percent. Similarly, less than 2% of marijuana arrests are for more than a kilogram. Id. at 17. This, to me, is among the most significant findings of the data. In the words of the study: “We do not seem to be using minnows to catch big fish. Instead, we are catching mainly minnows, occasionally slightly larger fish, and only very rarely a big fish.” Id. at 4. In other words, minnows are not leading to sharks most of the time.

How do drug arrests break down along racial lines? There’s a lot to unpack there, but a couple of points stand out. Relative to the total U.S. population, Whites are arrested for marijuana at a proportional rate and Hispanics at a lower one. In contrast, Blacks are arrested for marijuana at a higher rate—while making up around 13% of the U.S. population, they account for 24% of marijuana arrests.

Whites account for most meth and heroin arrests by far. But these arrests are a small portion of all drug arrests. Blacks account for most arrests for crack cocaine (54.6%) and a large share of powder cocaine arrests (31.7%), a share significantly disproportionate to the total Black population, as the following chart reflects. Id. at 29-30. 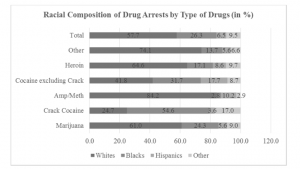 Simply put, racial disparities in drug arrests would reverse if we arrested as many people for the ‘White drugs’ of heroin and meth/amphetamine as the ‘Black drug’ of crack cocaine—a reasonable thought experiment given the relatively greater potency of a quarter gram of heroin and meth/amphetamine than a quarter gram of crack. As things stand, whatever injustice inheres in the practice of arresting offenders for minuscule amounts of hard drugs falls disproportionately on Blacks. Id. at 31.

Does the punishment fit the crime? Like North Carolina, most states attach felony liability to possession of even trace amounts of hard drugs like cocaine, heroin, and meth. Given that the majority of drug arrests are for small amounts of drugs and that people of color are more likely to be arrested, the authors ask whether it makes sense to impose felony liability with the attendant “life-changing consequences” for those offenders. Possession of a quarter gram or less of marijuana, cocaine, or meth are quantities consistent with personal use and typically range in price between $10 and $50. According to the authors’ research, even those arrested for selling small quantities of drugs are unlikely to be making any significant profit—most likely they are users trying to earn drugs to support their own habit or are people working at the very bottom of a drug organization for low wages (or both). “[T]he drug trade is simply not that profitable for those most likely to be arrested.” Id. at 44. Most drug offenders are small-time “minnows”, and not the high-level “sharks” who make a living from the drug trade (for whom the drug laws were designed).

The social harm involved in drug possession and selling is, in the eyes of the authors, less than the harm involved with many misdemeanors. North Carolina law provides a good comparison—stealing $999 worth of goods, assault on a female or on a government official, assault with a deadly weapon, and sexual battery are all misdemeanors. In light of the standards for those offenses, where there is clear and immediate social harm, the authors ask whether it makes sense to prosecute someone as a felon for having or selling $50 worth of cocaine or other drugs. The authors argue it should not, considering and rejecting various arguments in favor of the existing approach. “Given that gram-or-less amounts are consistent with small scale personal consumption, felony liability for possession or even sale of such an amount cannot be justified in terms of the harms cause by a single transaction or the blameworthiness involved.” Id. at 48. 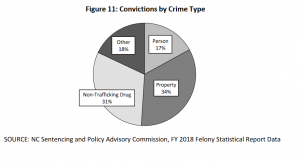 It also appears from the Sentencing Commission’s data that simple possession of hard drugs is used to support habitual felon sentences. More than 10% of habitual convictions were obtained in North Carolina last year where the most serious substantive offense was a felony drug possession offense (although the Sentencing Commission adds the caveat that the most serious felony in a case may not always be the basis for habitualizing the defendant).

There is a bill pending in the North Carolina General Assembly to decriminalize marijuana possession up to three ounces and to raise the felony amount from 1.5 ounces to 1 pound (16 ounces) (here). If adopted, this approach would undoubtedly reduce arrests, prosecutions, and convictions for the lesser amounts of marijuana. It would also be partially consistent with the recommendation of the authors in their study to “de-felonize” drug possession. The authors would go further, reducing simple possession of all controlled substances to a misdemeanor, a step California took when it changed its criminal code in 2014 (at least for most cases, as summarized here). Whatever approach North Carolina takes, the study’s analysis of the NIBRS data provides a fuller picture of who is getting arrested for drugs and for what amounts. If, as the study suggests, most drug offenders in North Carolina are in fact minnows, is it time to reconsider treating them like sharks? Post a comment and let us know your thoughts.