Recently I was asked to teach about sentencing in impaired driving cases. I thought the audience might want to know not just the law governing sentencing for impaired driving but also what sentences typically are imposed in those cases. For the latter, I turned to the North Carolina Sentencing and Policy Advisory Commission’s Fiscal Year 2020 Statistical Report on Driving While Impaired convictions. There one can find information about the percentages of impaired driving convictions sentenced at each of the six levels of punishment under G.S. 20-179, the types of sentences imposed by sentencing level, average sentence length for active and suspended sentences, and the average days of special probation (imprisonment) ordered by punishment level — among other data. Read on for highlights from the report, which contains data about convictions under G.S. 20-179 from July 1, 2019 through June 30, 2020. 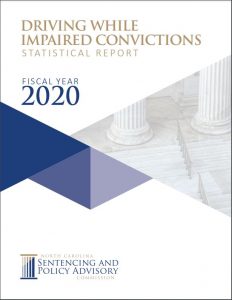 The North Carolina Sentencing and Policy Advisory Commission’s Fiscal Year 2020 Statistical Report on Driving While Impaired Convictions [hereinafter “the report”] included all convictions sentenced under G.S. 20-179, other than convictions for aiding and abetting impaired driving. The convictions included in the report were referred to there and are referred to here as “DWI convictions.”

More than half of all DWIs were sentenced at Level Five. Because of the postponement of certain court proceedings during the COVID-19 pandemic, there were fewer DWI convictions in the fiscal year ending June 30, 2020 (20,414) than the previous year (27,591). Nevertheless, the percentage of DWIs sentenced at each level was the same, and Level Five convictions comprised the majority. 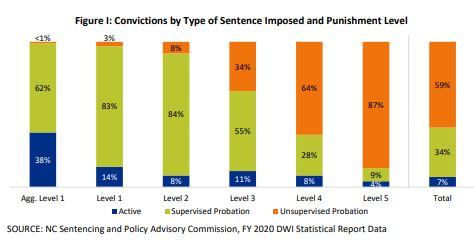 The report also includes the average days of confinement ordered as a condition of special probation at each level. 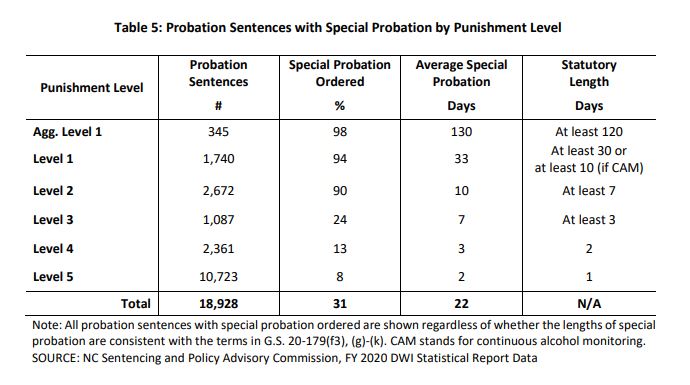 Because the report is based on convictions, it does not account for the number of charges that might have been disposed of in other ways, including a not guilty verdict. Statistics compiled by the Administrative Office of the Courts for the 2017 fiscal year reflect that 7 percent of the DWI dispositions that year were not guilty verdicts, 4 percent were magistrate findings of no probable cause, 22 percent were voluntary dismissals by the prosecutor, and 7 percent were dismissed with leave. [Convictions for Habitual Impaired Driving (G.S. 20-138.5) and aiding and abetting impaired driving (punished pursuant to G.S. 20-179(f1)) were included in the 2017 statistics but not in the report.] If dispositions today continue to break down along similar lines, most DWI charges (in addition to convictions) are disposed of by guilty plea rather than by trial.

Be sure to check out the full report for its comprehensive analysis and informative charts and tabulations. Hats off to the Commission’s talented staff for creating yet another enlightening report.