I recently traveled to New York City to do some sight-seeing. I noticed that I wasn’t the only one doing the looking. The New York Police Department has mounted security cameras on poles all over Manhattan. They are well-marked and conspicuous. Seeing them made me wonder about challenges to this kind of surveillance in light of the Supreme Court’s decision two terms ago in Carpenter v. United States, 585 U.S. ___, 138 S.Ct. 2206 (2018), holding that a person has a legitimate expectation of privacy in the record of his or her physical movements as captured through cell-site location information (CSLI). The court based its opinion in part on a person’s reasonable expectation that law enforcement will not constantly surveil his physical movements. Though video recorded by a law enforcement camera differs from CSLI in its scope and in the type of information collected, some have argued that the privacy interests identified in Carpenter also are implicated by the government’s use of pole-mounted surveillance cameras. 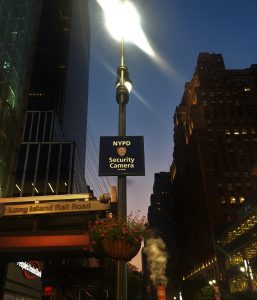 What Carpenter had to say. With respect to Fourth Amendment protections against sweeping and sophisticated modes of police surveillance, Carpenter noted that “[a] person does not surrender all Fourth Amendment protections by venturing into the public sphere.” 138 S.Ct. at 2217. Instead, matters a person seeks to preserve as private may be constitutionally protected even when those matters exist or occur in a public area. Carpenter pointed out that five justices in United States v. Jones, 565 U.S. 400 (2012) recognized that “individuals have a reasonable expectation of privacy in the whole of their physical movements.” Id.

Before the digital age, law enforcement officers “might have pursued a suspect for a brief stretch, but doing so ‘for any extended period of time was difficult and costly and therefore rarely undertaken.’” Id. For that reason, Carpenter explained, society’s expectation was that law enforcement officers did not, and, for the most part, could not, secretly monitor and catalog a person’s every movement for an extended period. Id.

Carpenter noted that when the government tracks the location of a cell phone it achieves “near perfect surveillance, as if it had attached an ankle monitor to the phone’s user.” Id. at 2218. And, the Court said that because wireless companies retained the records for years, the government can travel back in time to retrace a person’s whereabouts. “Only the few without cell phones could escape this tireless and absolute surveillance.” Id.

Thus, Carpenter concluded that the government’s acquisition of historical CSLI is a Fourth Amendment search that, absent exigent circumstances, requires a warrant supported by probable cause.

What does this have to do with pole cameras? The Carpenter Court said its decision was “narrow” and that it was not expressing a view on matters such as real-time CSLI or tower dumps. Id. at 2220. It also said it was not disturbing the application of the third-party doctrine to “conventional surveillance techniques and tools, such as security cameras.” Id.

Thus, Carpenter did not call into question the government’s ability to obtain video from cameras mounted by a third party for security purposes, such as cameras mounted by the operator of a retail store to monitor the establishment.

Carpenter did not, however, address the status of video recorded by government cameras placed (and often hidden) in public areas or, with the permission of private parties, in private areas, to surveil activities in spaces visible to the public. Such cameras allow the police to constantly monitor individuals without having to be physically present and, when the cameras are hidden, without risk of being seen. Does the fact that the recorded conduct could be seen by any passer-by defeat a person’s reasonable expectation of privacy? Or does ongoing, 24-hour, digitized surveillance implicate privacy concerns like those in Carpenter? Does the answer depend on the place being surveilled?

The weight of authority. Before Carpenter, several courts held that pole camera surveillance did not implicate the Fourth Amendment. See, e.g., United States v. Houston, 813 F.3d 282 (6th Cir. 2016); United States v. Bucci, 582 F.3d 108 (1st Cir. 2009); United States v. Jackson, 213 F.3d 1269 (10th Cir.), vacated on other grounds, 531 U.S. 1033 (2000). There are only a handful of post-Carpenter opinions addressing whether utilizing a pole-mounted camera to monitor a person’s movements is a Fourth Amendment search. In all but one of the cases I’ve discovered, the court has concluded that the camera’s recording of individuals did not implicate Fourth Amendment privacy interests and thus was permissible without particularized suspicion or a warrant.

Though a camera is able to monitor every single event in its purview for longer and with more accuracy and precision than could an individual officer, courts have reasoned that a camera’s recordings do not provide the same aggregate account of a person’s life and associations revealed by long-term GPS monitoring or the CSLI disclosed in Carpenter. These cameras (unlike a signal-emitting cell phone) do not follow the person into private appointments or into places of worship or political activity. Courts have adhered to this view even when the monitoring has extended for months. See, e.g., Tuggle, 2018 WL 3631881 (pole cameras that videoed the defendant’s driveway and the front of his residence for 18 months did not violate defendant’s reasonable expectation of privacy); Kay, 2018 WL 3995902 (pole camera mounted on utility pole in neighbor’s yard that monitored defendant’s driveway and front yard for 87 days did not violate defendant’s reasonable expectation of privacy).

Another view. The federal trial court in United States v. Moore-Bush, 381 F.Supp.3d 139 (D. Mass. 2019), saw things differently. There, the court concluded that the video log created by a camera that law enforcement affixed to a utility pole outside the defendants’ residence for eight months impermissibly intruded upon the defendant’s constitutionally protected privacy interests. The camera surveilled the defendants’ driveway and part of the front of the house. Law enforcement could remotely operate the camera to zoom in to read the license plates of cars at the residence.  And the camera produced a digitized, searchable recording.

The court reasoned that the defendants manifested a subjective expectation of privacy by choosing to live in a quiet, residential neighborhood in a house obstructed by a large tree. While they may not have expected absolute privacy as to activities in front of their house, they did expect privacy in the “whole of their movements over the course of eight months from continuous video recording with magnification and logging features in front of their house.” Id. at 144. That expectation, the court said, was one society was prepared to recognize as objectively reasonable. The pole camera surveillance of the defendant’s home risked, in the court’s view, chilling constitutionally protected religious, political, and associational activities. The recording and digitization of the continuous video also troubled the court, since even if the government took no current interest in the intimate personal details that might have been recorded it could “go back on a whim and determine a home occupant’s routine with to-the-second specificity.” Id. at 149. The court concluded that while the Fourth Amendment does not require officers to shield their eyes when passing by a home on a public thoroughfare, it does forbid the “intrusive, constant surveillance here.” Id. The court clarified that it was not ruling that every pole camera recording was a Fourth Amendment search.  Instead, four features of the surveillance in the case before it rendered the recording a search: (1) continuous video recording for eight months; (2) focus on the driveway and front of the house; (3) ability to zoom in close enough to read license plate numbers; and (4) creation of a digitally searchable log. Id. at 150. The government appealed the trial court decision, so the Court of Appeals for the First Circuit may soon weigh in.

Update: The First Circuit in United States v. Moore-Bush, 963 F.2d 29 (1st Cir. 2020) reversed the district court. The appellate court held that the lower court violated the doctrine of stare decisis in suppressing the evidence obtained from the pole camera and described the district court’s ruling as transgressing a “fundamental Fourth Amendment doctrine not revoked by Carpenter, that what one knowingly exposes to public view does not invoke the reasonable expectations or privacy protected by the Fourth Amendment.”

My subjective expectations. The pole cameras all about New York City did not bother me a bit. If anything, they made me feel safer. Because the places I saw them were so crowded and so public, I had the sense of being observed, if not surveilled, anyway.

I have a different feeling at home. I’d be surprised and discomfited if I thought government agents had a hidden camera mounted on the utility pole out front continuously recording the activities in my front yard and the license plates of every car that arrived at my home – even though all of that could readily be observed by a person standing on the street. Continuously recording the front of my house would provide a fairly comprehensive picture of my activities, schedule, interests, and associates. Nevertheless, the weight of authority (so far) suggests that my subjective expectations are not what society recognizes as objectively reasonable.