In January 2020, stakeholders in North Carolina’s Twenty-First Judicial District (Forsyth County) implemented a pretrial reform initiative designed to reduce unnecessary detentions of individuals charged with the lowest-level offenses. Specific attention was paid to those detained solely due to an inability to pay bail and not because of their risk to the community. To address this issue, local leaders developed and implemented a new structured decision-making tool for magistrates and judges to use when making bail decisions. Key elements of the tool include:

The UNC School of Government Criminal Justice Innovation Lab supported stakeholders in this project and is executing an empirical evaluation to help them understand the impact of their efforts. This post summarizes key findings in our most recent report, analyzing almost two years of post-implementation data.

Our evaluation begins by examining the rate at which magistrates followed or deviated from the decision-making tool’s recommendations. If we found that magistrates were deviating from those recommendations in most cases, that would suggest resistance to the new policy or that the tool is not providing viable guidance. In fact, we found the opposite: a high adherence rate to the tool’s recommendations (78.94% of forms). Because the quality of implementation is critical when evaluating the impact of reforms, we also examined forms for what we called “fidelity issues,” a failure to follow the process set out in the tool. We found that magistrates completed the vast majority of forms without fidelity issues (86.38%), suggesting successful implementation.

Figure 1b: Conditions of Release in Magistrate Bail Forms for Most Serious Cases – Class A-E Felonies

Like magistrates, district court judges adhered to the tool’s recommendation in the majority of cases (62.47%) and completed most forms without fidelity issues (71.88%). As expected, judges imposed a secured bond in a greater percentage of cases than magistrates. If the tool is working as anticipated, magistrates are screening cases where individuals are likely to succeed pretrial and issuing conditions other than a secured bond. This means that the pool of people seen by a judge at first appearance includes a larger proportion of individuals who have risk factors for pretrial failure and are subject to more restrictive conditions. Judges imposed secured bonds in the majority of cases (62.24%), but only in 17.86% of Class 2 and 3 misdemeanor cases that were the target of reforms. Finally, we found no statistically significant racial differences in judges’ use of secured bonds and secured bond amounts for Black and White individuals.

Figure 2b: Conditions of Release in Judge Bail Forms for Most Serious Cases – Class A-E Felonies

Forsyth County’s non-appearance rate decreased after reforms were implemented, and that decrease is larger than what occurred in Forsyth’s peer counties during the same timeframe. Specifically, 23.60% of pre-implementation cases in Forsyth had a court non-appearance. That rate declined to 6.45% for 2020 cases and to 5.13% for 2021 cases. Changes in court practices during the COVID-19 pandemic likely are impacting these results.

The average number of monthly detentions fell by 23.60% after reforms were implemented. Declines in pretrial detention were almost identical between Black and White individuals, and average detention length was also largely similar across race. The onset of the COVID-19 pandemic coincided closely with reform implementation in January 2020, and this confluence of events creates challenges in parsing out the effects of the pandemic and the effects of reforms.

Figure 3. Number of pretrial detentions by month, January 2019 to December 2021 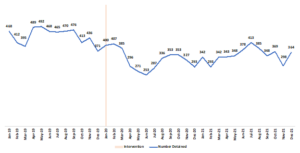 For more information about these and other results, please see the full report.

The UNC School of Government is non-partisan, non-advocacy and responsive to the needs of public officials. We do not advocate for any political ideology or policy outcome or allow our personal beliefs or those of our audiences to influence our work.