A new publication, the North Carolina Sentencing Handbook with Felony, Misdemeanor, and DWI Sentencing Grids, 2014–2015, is available from the School of Government. 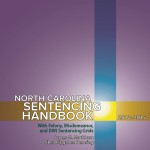 The booklet updates last year’s North Carolina Structured Sentencing Handbook. Like its predecessor, it contains instructions on felony sentencing (including drug trafficking) and misdemeanor sentencing, the sentencing grids themselves, and various appendices that may be helpful in your work.

The main improvement over last year’s edition is the inclusion of information on DWI sentencing, authored by Shea. She created a step-by-step guide for offenses sentenced pursuant to G.S. 20-179, and four charts that summarize the permissible punishment for each level of DWI from 2007 to today.

DWI nuances related to things like jail credit, sentence reduction credits, probation, and parole are flagged with a distinctive icon throughout the handbook. I think it looks sort of teal, but in the right light it’s not that far from good old Pantone 542. I thank Shea for making the handbook a more comprehensive sentencing resource.

The General Assembly did not enact a new sentencing grid during the short session, so the Structured Sentencing grids remain unchanged from the 2013–2014 handbook. Other new developments are, however, included in the new edition, such as the 90-96–like conditional discharge permitted under new G.S. 15A-1341(a4); a handful of offense class changes that kicked in on December 1, 2014; and a version of the place of confinement chart discussed here.

The Administrative Office of the Courts purchased copies of the booklet for all judges (district and superior court), all district attorneys and assistants, and all public defenders and assistants. Distribution, underway through regular supply orders, is scheduled to be complete by the end of January. Contact Joe Slate at 919-890-1532 if you have questions about AOC distribution. Others may purchase the booklet here for $25.