Meet Mary Pollard, the new Director of the Office of Indigent Defense Services

Yesterday, Mary Pollard began work as just the third Executive Director of the North Carolina Office of Indigent Defense Services (IDS), which began its work two decades ago in 2000. IDS is the statewide agency responsible for overseeing and enhancing legal representation for indigent defendants and others entitled to counsel under North Carolina law. Over the weekend, before she became deluged with her new responsibilities, Mary graciously agreed to do a quick interview with me. Read on to get to know a little more about her. 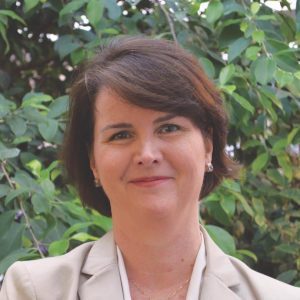 Tell us about your legal background.

I went to Wake Forest Law School, and after graduating in 1993 I went to work as an associate attorney at Womble, Carlyle, Sandridge & Rice in Winston-Salem and then Raleigh. I did civil litigation—business litigation and products liability. The cases ranged from simple breach of contract cases to patent infringement to complex products liability.

How did you get into indigent defense work?

In 1999, Tye Hunter, who was then the Appellate Defender in North Carolina called me. [Tye Hunter later became IDS’s first executive director, serving from 2000 to 2008.] He had heard that I was interested in working on a death penalty case. I’m still not sure where he heard that. I told him I was wholly unqualified, and he explained in his inimitable way how capital post-conviction litigation was JUST LIKE products liability litigation, with extensive discovery and expert witnesses. I had reservations given that my criminal law experience up to then had consisted of going to traffic court for the children of partners and clients. But, Tye convinced me, and the firm was supportive.

That’s how I got appointed to represent Alan Gell, who was on death row for first-degree murder. I represented him in post-conviction, which resulted in his conviction being overturned, and then worked on his retrial, which resulted in his acquittal of all charges. I liked doing civil litigation and my colleagues at Womble, but I just found this work more fulfilling.

I left Womble in 2002 and went to work as a staff attorney at the Center for Death Penalty Litigation, where I did capital post-conviction work until 2007. After that, I was self-employed until 2009 when I became the Executive Director of North Carolina Prisoners Legal Services. I was the PLS Director until I took this job.

Was it hard to leave PLS?

Definitely. We did a lot of good work. I’m proud of it. PLS does both criminal and civil work. We recruited and trained lawyers to do post-conviction work and got some amazing results for our clients, including exonerations of wrongfully convicted people. We litigated civil cases about conditions of confinement. We worked on cases to stop sexual abuse of women inmates and a class action under the Americans with Disabilities Act to make sure that inmates with disabilities could earn gain time on an equal footing with other inmates. We also did the important day-to-day work of correcting sentencing errors, including habitual felon sentences. While at PLS, I also had the honor of serving as the President of the North Carolina Advocates for Justice.

What made you consider becoming the IDS Director?

At PLS, we usually represent individuals one case at a time. The thought of being able to make systemic improvements appeals to me—to work on getting attorneys more resources, more funding, and essentially more time to work on their cases.

I look forward to the challenge, the immediate one being moving forward through the pandemic, which poses unique problems for the defense. When are we going to be able to try cases again? What are the alternatives? Will they be fair? The economic impact of the pandemic could also affect funding for indigent defense, which is already too low as it is.

The flip side is that we have an opportunity to make changes that could ease the workload and keep more people out of prisons and jails. So many cases in our criminal justice system are low-level misdemeanors, which can be handled in other ways. Rather than brand people with a conviction and impose collateral consequences, we can save money and reintegrate people better by exploring noncriminal options, such as civil infractions for violations of the law.

What else would you like people to know about you?

I’m pretty boring. I’ve been married 28 years as of last Saturday. My husband is in-house counsel at a large engineering firm. We live in Raleigh in the same house we’ve been in for 11 years. We have two nearly grown children, a son and daughter who are 24 and 21 years old. In my spare time I sit on the front porch and read or knit.

How should people reach you?

I had hoped to hop in the car and come see folks around the state. That isn’t going to happen for a while. So, we will try to set up some smaller virtual meetings. I want to learn about the issues and concerns that the defense community has. In the meantime, you can reach me at Mary.S.Pollard@nccourts.org or the IDS main number, 919.354.7200. I am excited to get started.