Failures to appear in court (FTAs) are expensive and inconvenient. There is wasted preparation and court time, along with cost and inconvenience for witnesses, jurors, defense lawyers, prosecutors and victims. The defendant may be subject to arrest and possibly pretrial incarceration. Additionally, when an order for arrest issues after a FTA, law enforcement officers are tasked with taking the defendant into custody. And the arrest requires additional court time, both for the required initial appearance before a magistrate and any subsequent bond review proceedings.

Partly in response to research showing the effectiveness of court date reminder systems in reducing FTAs, last year the North Carolina Administrative Office of the Courts (NC AOC) rolled out a court date reminder system. The North Carolina system is an “opt in” system, meaning that defendants have to sign up for it (online, here) as opposed to being automatically enrolled. Individuals can choose email or text message reminders. Once subscribed, individuals receive two court date reminders. The first message is sent seven days before the court date; the second is sent one day prior. Email notices look like this:

According to the NC AOC, defendants who sign up for reminders also get “[a] near real-time” message “every time a Court Date, Court Room or Session is added or changed.” A sample text message update looks like this:

Specifically, a recent study (report here) evaluated the effectiveness of different types of text reminder systems for about 20,000 people who received criminal summonses in New York City. The researchers noted that the traditional policy response to FTAs is to implement stricter enforcement, based on the assumption that people FTA because they aren’t deterred by existing penalties. To better understand the factors contributing to FTAs, the researchers conducted quantitative and qualitative research and uncovered barriers contributing to FTAs. These barriers included, in part, people perceiving a mismatch between minor crimes and the requirement of having to appear in court and the possibility of an arrest (“mental model”); overweighing the immediate hassles of attending court (such as taking time off work) and ignoring the downstream consequences (possibility of arrest) (“present bias”); and simple forgetfulness about the need to appear (“inattention”). Armed with this information about why people FTA, the researchers designed three different types of text message court date reminders. The first type focused on the consequences of a FTA; the second encouraged defendants to make plans to appear in court; and the third version combined messaging about consequences and plan-making. All versions served as reminders for those who forget about their court dates. Here is what the three different versions looked like: 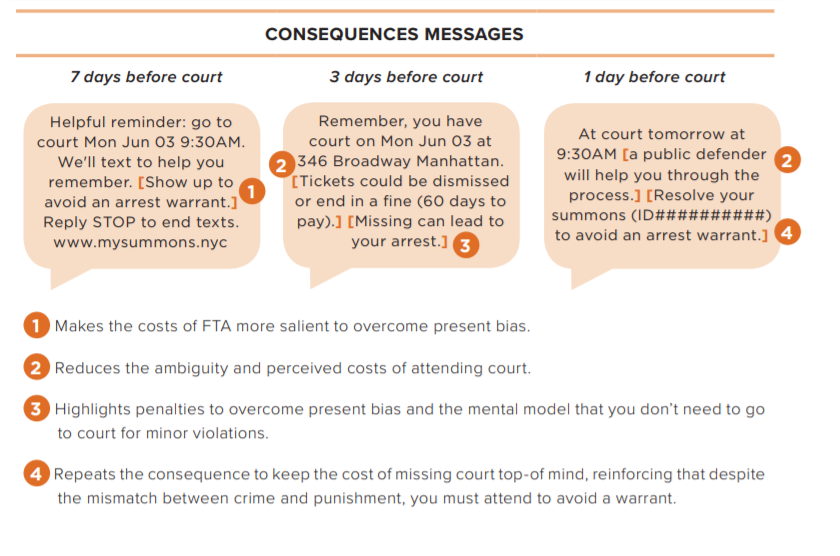 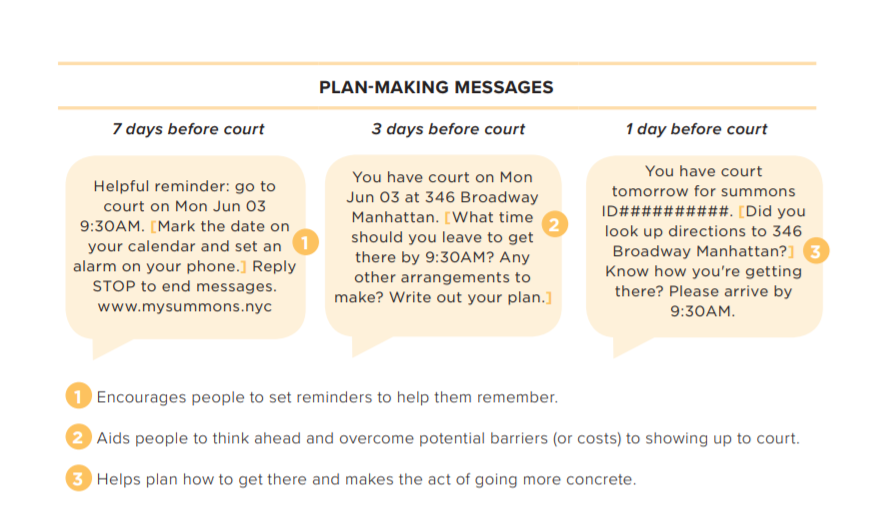 What were the results? The combination messages worked best. Researchers found that receiving any pre-court message reduced FTA by 21%. This is consistent with other research showing the effectiveness of court date reminder systems. However, they also found that the combination messages, using elements of both the consequences and plan-making sets, were the most effective, reducing FTA by 26% (from 38% to 28%). Here are the results in graph form: 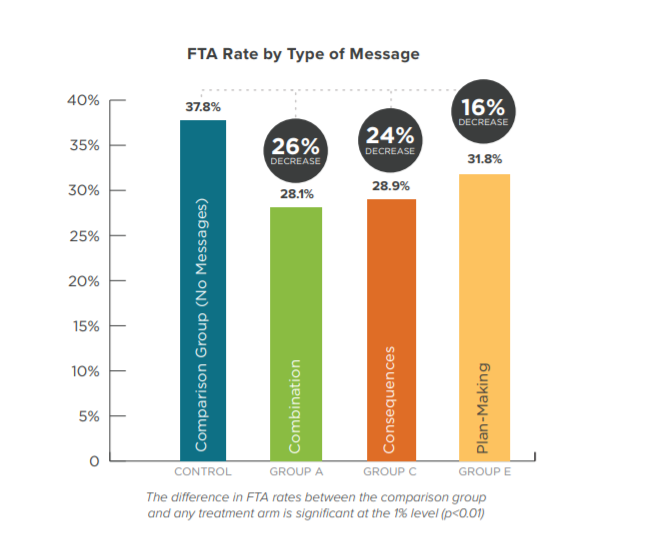 What might this mean for North Carolina? The North Carolina court date reminder system addresses only forgetfulness as a cause of FTA. This study suggests that court date reminder messages incorporating information about the consequences of a FTA and encouraging plan-making are the most effective. Given that our state reminder system already is up and running, changes to the content of its reminders may be a tweak worth considering.