Two men cited in separate instances for failing to stop at red light camera locations in Greenville, NC filed declaratory judgment actions arguing that the city’s red light camera enforcement program violated the state constitution. Among other claims, the men argued that the program violated the Fines and Forfeitures Clause contained in Article IX, Section 7 of the North Carolina Constitution because the local school board received less than the clear proceeds of the civil penalties the city collected for violations. The Court of Appeals in Fearrington v. City of Greenville, 2022 NCCOA 158, __ N.C. App. __ (2022), agreed, holding that the funding framework violated the state constitution. 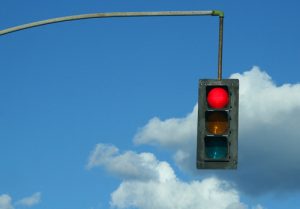 Beginning with the City of Charlotte in 1997, the General Assembly has authorized specified municipalities to handle violations of G.S. 20-158 in a way that involves neither on-the-beat officers nor a cited driver’s appearance in district court. Instead, a state statute of limited application has authorized certain towns and cities to adopt ordinances to administratively enforce G.S. 20-158 by using red light camera systems. G.S. 160A-300.1(c). These systems photograph violators and generate citations demanding payment of a fine, which are processed administratively by the city.

Fines and Forfeitures Clause. Article IX, Section 7 of the North Carolina Constitution provides that “the clear proceeds of all penalties and forfeitures and of all fines collected in the several counties for any breach of the penal laws of the state, shall belong to and remain in the several counties, and shall be faithfully appropriated and used exclusively for maintaining free public schools.” This means that when the State or one of its political subdivisions collects a penalty or fine – and sums collected for the violation of a municipal ordinance and a coordinate state statute qualify as a penalty or fine — the clear proceeds of that amount are owed to the public schools in the county where the violation occurred. Clear proceeds are the amount collected diminished only by the costs of collection, which, pursuant to state statute, may not exceed 10 percent of the amount collected. See G.S. 115C-437. And costs of collection do not include costs associated with enforcing the ordinance; instead, they are limited to the administrative costs of collecting the funds. See Cauble v. City of Asheville, 314 N.C. 598, 606, (1985) (explaining that if “the costs of enforcing the penal laws of the State were a part of collection of fines imposed by the laws, there could never be any clear proceeds of such fines to be used for the support of the public schools”).

The Court of Appeals determined in Shavitz v. City of High Point, 177 N.C. App. 465 (2006), that the Fines and Forfeitures Clause when read in conjunction with the state statute on clear proceeds required the City of High Point (which operated a red-light camera system pursuant to G.S. 160A-300.1) to pay 90 percent of the amount collected by its red light camera program to the Guilford County Board of Education. This ruling upended High Point’s red light camera operation as the city was paying 70 percent of the revenue it collected to the red-light camera vendor.

The City of Greenville’s program. In 2000, the City of Greenville and a handful of other municipalities were added to the list of towns and cities permitted to operate red light camera programs. In 2016, Greenville requested legislation that would permit it to contract with a red light camera vendor and to cover its expenses for such a program; absent such legislation, the city deemed such a program not to be financially viable. See Vaitovas v. City of Greenville, 2022-NCCOA-169, ___ N.C. App. ___ (2022), at ¶ 6. The General Assembly responded by amending G.S. 160A-300.1(c) in a local act that applied only to Greenville. See S.L. 2016-64. The act allowed Greenville to contract with a vendor for the lease or purchase of a red light camera system and permitted the city and the Pitt County Board of Education (the “School Board”) to enter into an interlocal agreement that included cost-sharing and reimbursement provisions for the “purpose of effectuating the provisions of G.S. 160A-300.1 and this act.” Id.

The Court of Appeals’ analysis. Greenville and the School Board argued that the interlocal agreement did not violate the Fines and Forfeitures Clause because the city initially paid to the School Board all the fines it collected.  The Court of Appeals rejected that argument as contrary to the plain language of the constitution, which provides that “the clear proceeds . . . shall belong to and remain in the several counties, and shall be faithfully appropriated and used exclusively for maintaining free and public schools.” N.C. Const. Art. IX, Section 7. The School Board did not receive the clear proceeds, the Court reasoned, when “Greenville forwards the fines to the School Board and subsequently takes 30% of the money back for costs which are not deductible to begin with.” Slip op. at ¶ 62. The “purpose of the people in mandating that the clear proceeds of such fines be ‘faithfully appropriated’ to the public schools,” the Court explained, “cannot be circumvented by the elaborate diversion of funds or cleverly drafted contracts.” Id.

Moreover, the Court noted, even if the School Board were deemed to have initially received the clear proceeds, those amounts must then be used exclusively for maintaining free and public schools and not for reimbursing the city for payments to the vendor. By stating that the clear proceeds were to “remain in the several counties,” the framers did not, in the Court’s view, “intend for $31.85 of every $100 paid fine to go to private companies such as . . . a for-profit corporation located in Arizona.” Slip op. at ¶ 63. Thus, the Court of Appeals remanded the case to the superior court for entry of summary judgment for the plaintiffs on their claim under the Fines and Forfeitures Clause.

What does this mean for other cities’ red light camera programs? Any local legislation that authorizes a town or city to remit to a red light camera vendor sums that exceed 10 percent of net proceeds is ripe for a constitutional challenge. See, e.g., S.L. 2001-286, as amended by S.L. 2003-380 (defining clear proceeds for purposes of red light camera programs in the City of Concord and Wake County as “funds remaining after paying for the lease, lease purchase, or purchase of the traffic control photographic system; paying a contractor for operating the system; and paying any administrative costs incurred by the municipality related to the use of the system.”).

What about school bus cameras? In 2017, the General Assembly authorized counties to adopt ordinances imposing civil penalties for passing a stopped school bus, conduct that otherwise is a misdemeanor offense under G.S. 20-217.  See S.L. 2017-188.  G.S. 153A-246 permits counties to civilly enforce G.S. 20-217 by using automated school bus safety cameras installed and operated on school buses. School boards are in turn authorized by G.S. 115C-242.1 to contract with private vendors for the installation and operation of automated school bus safety cameras. They also may, along with counties and law enforcement agencies, enter interlocal agreements “necessary and proper to effectuate the purpose and intent of G.S. 115C-242.1 and G.S. 153A-246.” G.S. 115C-242.1(c). Such interlocal agreements may “include provisions on cost-sharing and reimbursement” to which the school board, county commissioners or law enforcement agency “freely and voluntarily agree for the purposes of effectuating [G.S. 115C-242.2] and G.S. 153A-246.” Id. Though this language is similar to the local act authorizing the funding scheme struck down in Fearrington, automated school bus camera enforcement programs differ from red light camera programs in significant ways.  First, the school board itself contracts with the vendor rather than the county entering into a contractual relationship. Second, the contracted-for service arguably relates directly to maintaining public schools in that it aims to keep children safe when they enter and depart school buses on their way to and from school. Thus, even if such agreements provide for payment to a vendor, county, or law enforcement agency of an amount that exceeds 10 percent of the net proceeds from the enforcement program, such an arrangement may nevertheless comport with the Fines and Forfeitures Clause.