Goodbye, Judge Jarrell.  You will be missed.

A light went out on the halls of justice over the weekend. And we are mourning. 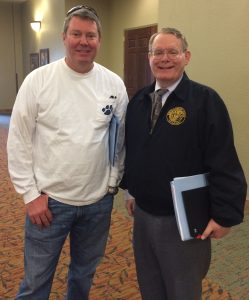 Judge Jarrell had an impressive record of public service. He served seven years as an assistant district attorney before being appointed as a district court judge in Guilford County in August 1999. He spent the next twenty years serving in that role, and was appointed Chief District Court Judge by then-Chief Justice Mark Martin in 2016. After becoming chief, Judge Jarrell created a DWI court to reduce a backlog of thousands of pending DWI cases. To do that, he obtained buy-in from many interested parties, including law enforcement, the district attorney, the defense bar, the Administrative Office of the Courts, and the senior resident superior court judge, who agreed to allow a superior court courtroom to be used for DWI court. Judge Jarrell’s ability to engage people with differing interests and perspectives and to encourage their work to better the public interest was one of his many special talents.

Judge Jarrell was simply all-in on the job. He was a respected jurist and colleague. He loved the community he lived in. He was dedicated to his courthouse family and to the entire judicial branch – traveling to meetings all over the state to promote justice, provide and participate in judicial education, and to engage in efforts to support and improve the court system.

Judge Jarrell was generous with his time. He traveled to Chapel Hill to teach new and experienced judges in School of Government programs and was a regular feature at Association conferences. He even agreed to teach a session on sovereign citizens that involved sharing his experience of learning that one such person had filed with the Guilford County Register of Deeds a multi-million-dollar lien against his property. All that traveling did indulge one of Judge Jarrell’s other passions, driving a fast car (which is, of course, different from driving fast in a car). After the Association conference in Greensboro a few years ago, Judge Jarrell wheeled into the parking lot in a fancy Corvette, offering to take us for a spin. We should have taken him up on it.

Tomorrow, Judge Jarrell was supposed to convene and preside over a meeting of the board of governors for the NC Association of District Court Judges held here at the School of Government. We’ve postponed the meeting. No one can really bear to hold it right now without him. Meetings were always better when Judge Jarrell was involved. He was focused on the business at hand, but never so focused that he could not spend a few minutes passing out coupons (really) and sharing a personal story, often involving one of his sons. Judge Jarrell was always upbeat, and he was seriously funny. He was also incredibly kind.

In his work with the judge’s association and elsewhere, Judge Jarrell enthusiastically collaborated with colleagues who belonged to a different political party than he. Judge Jarrell expressed genuine interest in the perspectives and analysis of others, and demonstrated a willingness to reconsider his views in light of additional information or a persuasive argument. His open-mindedness did not, however, extend to hummus. In every meeting where the association’s board was called upon to set a conference menu, Judge Jarrell vetoed the hummus. His veto was never majority-proof, so hummus was served anyway.

All of Judge Jarrell’s good works made him a great judge and colleague. But he was more than that to me and others here at the School. He was a friend, and we miss him already.