Brittany Bryant was charged with misdemeanor larceny for allegedly stealing acne toner and towelettes valued at $14.94 of from a Wal-Mart in Raleigh. The prosecutor agreed to reduce the charge from larceny to shoplifting. She accomplished that in a manner familiar to district court practitioners. She struck through the charging language of the citation, wrote in “shoplifting,” and initialed and dated the document. Bryant then pled guilty to shoplifting by concealing merchandise and was sentenced. 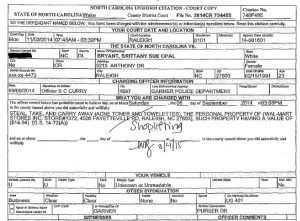 Bryant later sought to set aside her conviction on the basis that the prosecutor improperly amended the citation. The court of appeals agreed, holding in State v. Bryant, ___ N.C. App. ___ (October 1, 2019), that the amendment was improper and deprived the district court of jurisdiction.

Bryant has left many wondering how misdemeanor charges may be amended to charge different, and less serious, offenses without subjecting the convictions to collateral attack.

The court’s reasoning. G.S. 15A-922(f) allows citations (and other pleadings in misdemeanor cases) to be amended when they do not change the nature of the offense charged. Amendments that change a pleading to charge a different offense, in contrast, are not permissible.  See, e.g., State v. Carlton, 232 N.C. App. 62 (2014) (finding that improper amendment of the citation to charge the defendant with a different crime deprived the superior court of jurisdiction over the charges).

Because larceny and shoplifting are separate statutory offenses requiring proof of different elements, the court reasoned that the amendment was not permissible. The impermissible amendment deprived the district court of jurisdiction to enter judgment against the defendant.

That reasoning seems pretty straightforward. So why did the prosecutor in Bryant and many other prosecutors in similar cases view this kind of change as permissible?

A prosecutor may file a statement of charges any time before arraignment in district court. G.S. 15A-922. A statement of charges is a criminal pleading charging a misdemeanor that is signed by a prosecutor. It supersedes all previous pleadings of the State and may charge the same offenses as a previously issued citation or additional or different offenses. G.S. 15A-922(d).

Many people (including me) viewed the district attorney’s amendment of charges stated on the citation by striking through the original language, adding new language, and signing, as procedurally akin to the filing of a statement of charges. Bryant indicates there must be something more.

Or must prosecutors write out new charges on a form especially designated for this purpose? See AOC-CR-120.  If the latter option is favored, can that feasibly take place in district court?  If not, has Bryant won her battle but lost the war for future criminal defendants who seek to plead to different and less serious charges?

I have many questions and few answers after Bryant. Readers, please chime in and share your thoughts.