This March, you almost need a bracket to keep up with recent personnel changes in the state’s judicial branch. Not only were a handful of new appellate judges elected to office in 2018, but, just in the last month, the governor appointed a new chief justice and announced plans to appoint a sitting court of appeals judge to fill the associate justice seat she vacated. In the same time frame, the General Assembly passed legislation to prevent the departure of a sitting court of appeals judge from reducing the size of that court. Having trouble keeping up? This post will review recent events impacting the composition of the state’s appellate courts and judicial branch leadership and preview potential changes to come. 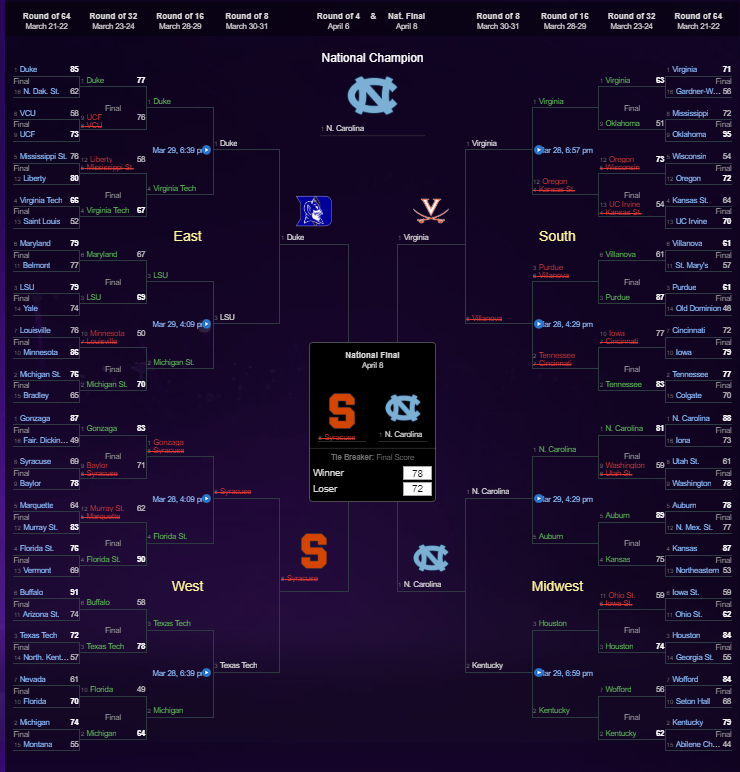 North Carolina Supreme Court. Mark Martin was elected as Chief Justice of the North Carolina Supreme Court in November 2014. He retired in February to become the Dean of Regent University’s School of Law, creating a vacancy to be filled by gubernatorial appointment. Governor Roy Cooper selected then-Associate Justice Cheri Beasley to fill the vacancy. Chief Justice Beasley was sworn in March 7, 2019 and will hold that office until January 1, 2021. In 2020, there will be an election for an eight-year-term as chief justice.

The appointment of Chief Justice Beasley left her associate justice seat vacant, and Governor Cooper has appointed Court of Appeals Judge Mark Davis to fill that position. Davis will be sworn in next month and, like the chief justice, will hold that position until January 1, 2021, when the winner of a 2020 election for the seat will assume office for an eight-year term.

North Carolina Court of Appeals. The size of the court of appeals increased from 12 to 15 judges effective December 15, 2000. But in April 2017, the General Assembly amended the statutory provisions governing the composition of the court of appeals to provide that when the seat of an incumbent judge becomes vacant during the judge’s term, the seat is abolished—until the total number of court of appeals judgeships is reduced to 12. Events following the April 11, 2017 ratification of this provision caused considerable political stir. Governor Cooper, a Democrat, vetoed the bill. And before the Republican-controlled General Assembly could override the veto, Court of Appeals Judge Doug McCullough, a Republican, retired (a month before he reached the mandatory retirement age of 72).  The governor quickly appointed John Arrowood, a Democrat, to McCullough’s seat. Though the ratified bill became law following a veto override, fifteen judges remained on the court of appeals.

Two of those seats will soon be vacant. Judge Davis will be sworn in as an associate justice April 8. And Judge Robert Hunter will retire March 31, having reached mandatory retirement age. Governor Cooper has not announced who he plans to appoint to those vacancies.

Other changes. The Director of the North Carolina Administrative Office of the Courts (AOC), Judge Marion Warren, resigned from his post at the end of February to become senior associate dean of Regent University School of Law. Then-Chief Justice Martin appointed long-time deputy director McKinley Wooten to serve as interim AOC director. Chief Justice Beasley will name the new permanent director, who serves at pleasure of the chief justice.

Finally, Melvin Wright Jr. has returned as executive director of the Chief Justice’s Commission on Professionalism. Wright was first named executive director in 1999, shortly after the commission’s inception, and served in that role until he retired in August 2017. Wright did not waste any time settling back into his role. The commission announced his return last Friday. On Thursday, he was teaching at the School of Government’s orientation program for new district court judges. No, I did not reverse that order.

Keeping my day job. The image attached to this post is my actual March Madness bracket. As you can see, there is no risk of me leaving the SOG to enter into the sports betting business anytime soon. But I’m hoping the Tar Heels save me from looking like a total fool.