An Update on Prisons and Jails as the Courts Expand Operations

As the court system expands operations this week, people have questions about the current status of the correctional system. Today’s post covers some of the things we know.

Today, the prison population stands at 31,672 inmates—down almost 10 percent from the start of the pandemic in North Carolina. 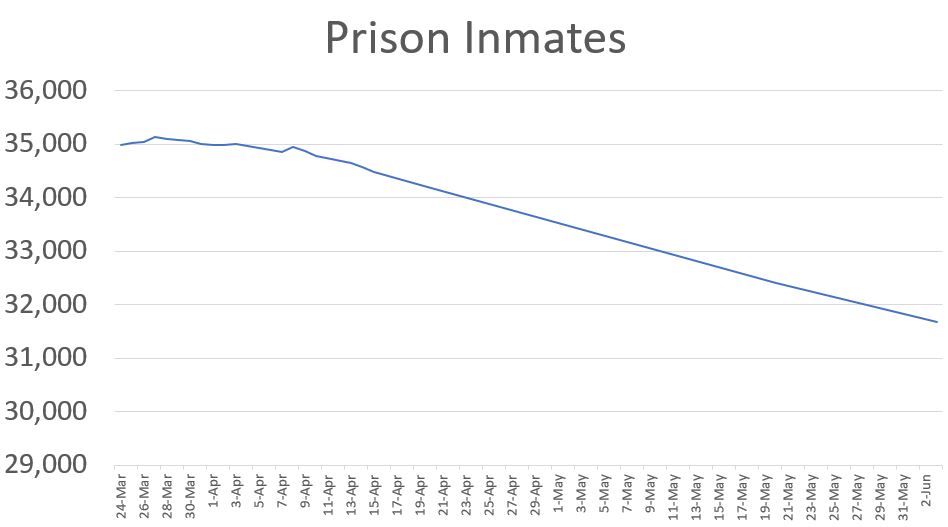 A portion of that decline, though, is the result of an increased number of inmates held in backlog status in the county jails. That was to be expected in light of the continuing moratorium on most inmate transfers from jail to prison, initiated on April 6. As of last week there were over 1,600 backlog inmates in the county jails. The prison system, in cooperation with the county sheriffs, plans to resume transfers soon (using half-full buses to accommodate safe distancing requirements), with a goal of reducing the backlog by 700 inmates by the end of June.

An issue associated with an increased jail backlog is that some sentenced inmates stuck in a holding pattern in the jails wind up serving more time than they would if they were promptly transferred into a state prison. It’s a legitimate concern. Each day spent in jail is a missed opportunity to accrue Earned Time and other sentence credits. That’s one of the reasons it has long been the case that low-level felons wind up serving a greater percentage of their minimum sentence than serious felons, as discussed here back in 2015. And here in 2010.

To give an example, a defendant who receives a 10–21 month sentence who serves that sentence in prison will typically be released between 10 and 11 months. If the person stays in jail, and thus never receives any sentence credits, he or she will not be eligible for release to post-release supervision until 12 months. The gap widens if you consider longer sentences.

Is it necessarily the case that a backlogged defendant cannot accrue any sentence credits? No. If a backlogged inmate has worked or completed programs in the county jail while awaiting transfer, and the jail provides proof of that, DACJJ will reduce the sentence along the lines of a similarly situated prison inmate. A simple letter signed by the jail administrator describing the work and the span of time during which it was performed would suffice. A small number of jails have occasionally provided these letters for years.

A court could recommend the award of such credit, but its application is generally a matter of sentence administration within the discretion of the administrative agency. The one thing a judge can control without a doubt is the length of the sentence itself. In an appropriate case I could imagine the court finding the pandemic backlog and its credit repercussions as a mitigating factor and shortening the sentence accordingly. It might also be a reason for reducing a sentence upon revocation of probation, as provided in G.S. 15A-1344(d1).

The prison system is considering additional updates to its sentence credit policy. I’ll post an update if there are changes.