A Simple Idea for Reducing FTAs on Summonses: Redesign the Form

In a series of posts I’ve been discussing bail reform in North Carolina and various options to reduce pretrial detentions that do more harm than good. Some of the solutions are tough and complicated. Here I offer one potential solution that’s neither hard nor complex: Redesign the Criminal Summons form.

In North Carolina, one of the ways that defendants are charged with criminal offenses is with the Criminal Summons. See generally G.S. 15A-303 (criminal summons). The Criminal Summons is issued upon a finding of probable cause. Id. at -303(c). The Summons doesn’t authorize the defendant to be taken into custody, rather it orders the person to appear in court to answer the charges. Id. at -303(a) & (d). If the defendant doesn’t show up as required, we call this a failure to appear or FTA for short. The court can respond to a FTA by issuing an order for arrest (OFA). Id. at -303(e)(2). As its name implies, the OFA results in an arrest. G.S. 15A-305(a). As with all arrests, the defendant must be taken before a judicial official without unnecessary delay for an initial appearance, where a judicial official determines conditions of pretrial release. See G.S. 15A-511. If the judge who issued the OFA doesn’t recommend conditions of release, the FTA requires the judicial official conducting the initial appearance to set a minimum $1000 secured bond. G.S. 15A-534(d1). As I discussed in my previous post on bail reform, that secured bond can lead to wealth-based detentions. When those wealth-based detentions are for low-level offenses (typically what is charged in a Criminal Summons), a host of negative consequences can result, not just for defendants in terms of negative case, social, and financial outcomes, but also to taxpayers in terms of unnecessary jail costs and communities in terms of more crime down the road.

As should be clear from this discussion, significant consequences attach to FTAs, even for relatively minor crimes. In light of that, it might be surprising to see just how little emphasis is given to those consequences on the Criminal Summons form (AOC-CR-113). Here is what the form looks like, with the key language highlighted in yellow: 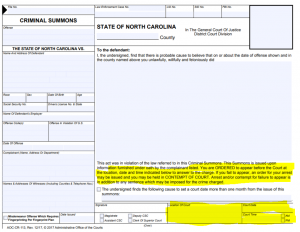 The information is all there—it orders the person to appear in court and tells them that if they FTA an OFA may be issued. But the warning isn’t very prominent. Does that matter?

One recent study (here) found that a redesign of a summons form to emphasize court date and consequences of failing to appear reduced FTAs by 13%. That’s a lot of benefit from a form tweak. In the study, researchers redesigned the New York City summons form to make the most relevant information stand out. In the revised form, information about court date and location was moved to the top of the form, the negative consequences of failing to appear are boldly displayed, and clear language encourages recipients to act accordingly. Here’s a side-by-side comparison of the old and new forms, highlighting the changes: 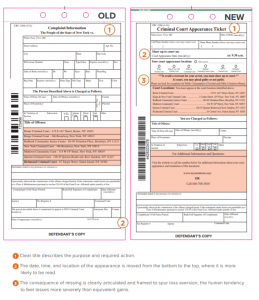 The redesigned NYC summons form was introduced in March 2016. To isolate the impact of the new summons form from other factors that might impact FTAs, researchers compared outcomes between defendants who were issued the old form versus the new one using a quasi-experimental approach called regression discontinuity design. Again, they found that those who received the new form had a FTA rate that was 13% lower than those who received the old form. Considering cost-benefit analysis, researchers noted that using the new form has exactly the same cost as using the old one. The only new cost was that associated with the one-time form change. By contrast, the researchers noted that the costs of failing to appear in court are much higher, with impacts for courts and law enforcement, and for defendants who end up incarcerated as a result of an OFA issued after a FTA.

If these study results hold true in North Carolina, there could be tremendous benefits to the court system, law enforcement, defendants, taxpayers and communities from a simple form change. I have already sent this post to members of North Carolina’s Criminal Forms Committee. Stay tuned for whether this gets any traction. If it does, might the Citation form be next?