The North Carolina Sentencing and Policy Advisory Commission has just published its annual Structured Sentencing Statistical Report for Felonies and Misdemeanors. Today’s post covers some highlights from the report.

This year’s report, available here, covers sentencing episodes from July 1, 2017 to June 30, 2018. Quick facts for felonies are available here, and for misdemeanors here. As always, remember that the report is based on sentencing episodes, defined as the most serious conviction for a defendant on a given day of court. There were 29,623 felony episodes (up slightly from 28,985 last year) and 92,855 misdemeanors (down from 94,150 last year). The continued decline of misdemeanor convictions is . . . striking. 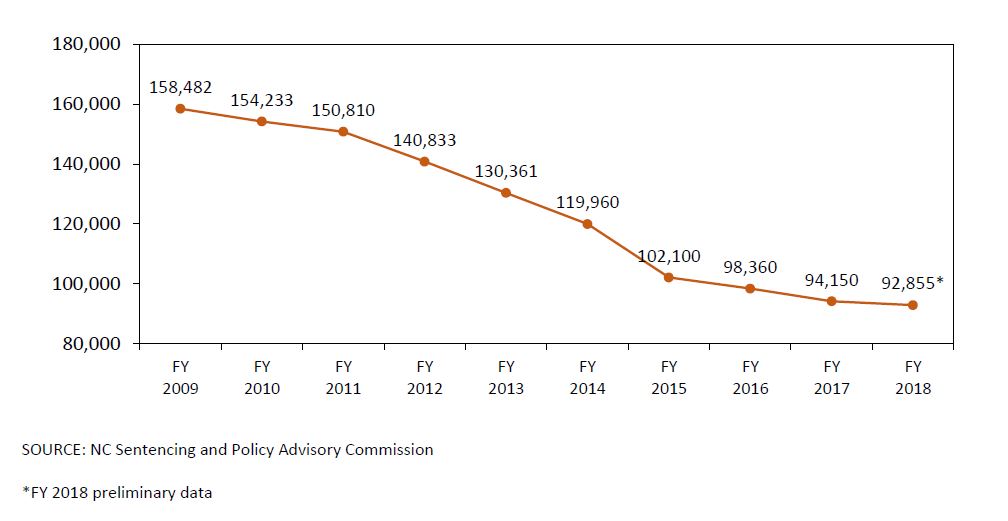 Habitual felon convictions continue to climb. There were 1,059 habitual felon convictions in this reporting period. That is up from 946 last year, 914 two years ago, and 873 three years ago. The most common type of habitual felon sentence was Class E, indicating that the most common type of underlying felony was Class I (the law has operated as a four-class enhancement since 2011). The most common specific underlying offense is breaking or entering, which accounts for almost 10 percent of all habitualized felonies. That is true despite the availability of the habitual breaking and entering law, which was used 112 times—well below its peak of 154 from a few years ago. Regardless of offense class, habitual felons are much more likely than other defendants to be sentenced in the mitigated range. For example, 73 percent of Class D habitual felons were sentenced in the mitigated range, compared to 44 percent of non-habitual Class D felons and 28 percent of all felons.

Bench trials. Five convictions resulted from bench trials in superior court (essentially the same number as in the previous years).

ASR. Advanced supervised release (ASR) climbed to 105 sentences, up from 93 sentences last year and 79 the year before that. Interestingly, the largest number of those ASR sentences were for Class D felonies, where the ASR date can lop literally years off the defendant’s sentence. Perhaps the law is evolving as a fallback option or middle ground for places on the grid that would otherwise require a lengthy active term.

Trafficking. There were 481 drug trafficking convictions, up from last year’s 452. It will be interesting to see if the changes made to the drug trafficking law in 2018—amending it to specifically include opioids, among other changes described here—will cause that number to increase. Or perhaps those substances were already being prosecuted as opium trafficking under the prior law. About 18 percent of trafficking convictions received other-than-Active punishments, indicating that the court found substantial assistance and departed from the otherwise-mandatory sentencing regime (or made a mistake). Other defendants benefiting from a substantial assistance finding may have received a shorter Active sentence, but it’s a little bit harder to tease those out of the available data.

As always, I thank the Commission staff for its thoughtful and careful work on the report. I keep a copy on my desk and refer to it almost every day.