What Do We Know About Violent Crime Trends in North Carolina?

Crime statistics are compelling reading. When federal agencies release new estimates of the national crime rate, the news media pounce. The crime rate, its causes, and how to address crime are being hotly debated. Violent crime in particular prompts concern about public safety and the appropriate policy response.

So, what do the data tell us about trends in violent crime in North Carolina?

This post focuses on the first two data sets: police and court data. Although the victim survey data (from the annual National Crime Victimization Survey) provide estimates for both the nation and North Carolina, they are challenging to use and an in-depth discussion requires more than a single blog post. 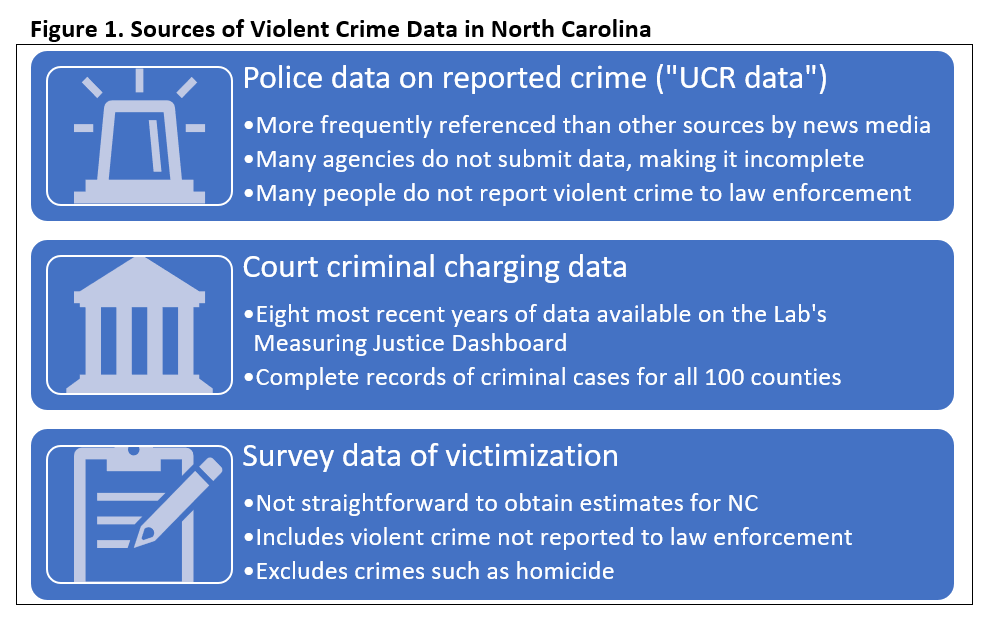 Major national news headlines about crime typically rely on police data. These data — administered by the FBI’s Uniform Crime Reporting program (UCR) — have been available in some form since the 1960s. They contain standardized measures of crime across the nation and include crime reported to or detected by law enforcement. Law enforcement then submits the data to the North Carolina State Bureau of Investigation (SBI), which in turn compiles and transfers the data to the FBI. Estimates for North Carolina are available from either the SBI or the FBI.

As noted, these data only capture crime that is detected by or reported to law enforcement. However, victims frequently do not report violent crime to law enforcement. Research suggests that fewer than five out of ten instances of violent victimization are reported to police. Because of this under-reporting, these data may understate violent crime.

There are also concerns that police data are incomplete. Not all law enforcement agencies submit data to the SBI. Also, the FBI may deem some submitted data unusable; for example, a department may not submit enough months of data in a given year.

The issue of missing law enforcement agency data was heightened when the FBI announced in 2016 that it would require a new reporting system starting in 2021. The change was for good reason. The new system, the National Incident Based Reporting System (NIBRS), allows for much more detailed information than the old one. The old system produced reports on crime in the aggregate according to eight index crime categories and only the most severe index crime was counted when several index crimes were committed at one time (there are four index violent crimes: murder, forcible rape, robbery, and aggravated assault). A key advantage of the new NIBRS standard is that the data can be used to report estimates of all committed crimes as well as specific factors in a crime, such as if a weapon was involved.

Some agencies were ready for the change, others were not. In 2018, when North Carolina switched to NIBRS, the proportion of law enforcement agencies’ data used by the FBI fell precipitously to 16% (Figure 2). Because it is unclear which agencies’ data were not reported or used, it is difficult to know how this drop in reporting in 2018 and 2019 impacted the reliability of the estimated crime rate for those years. 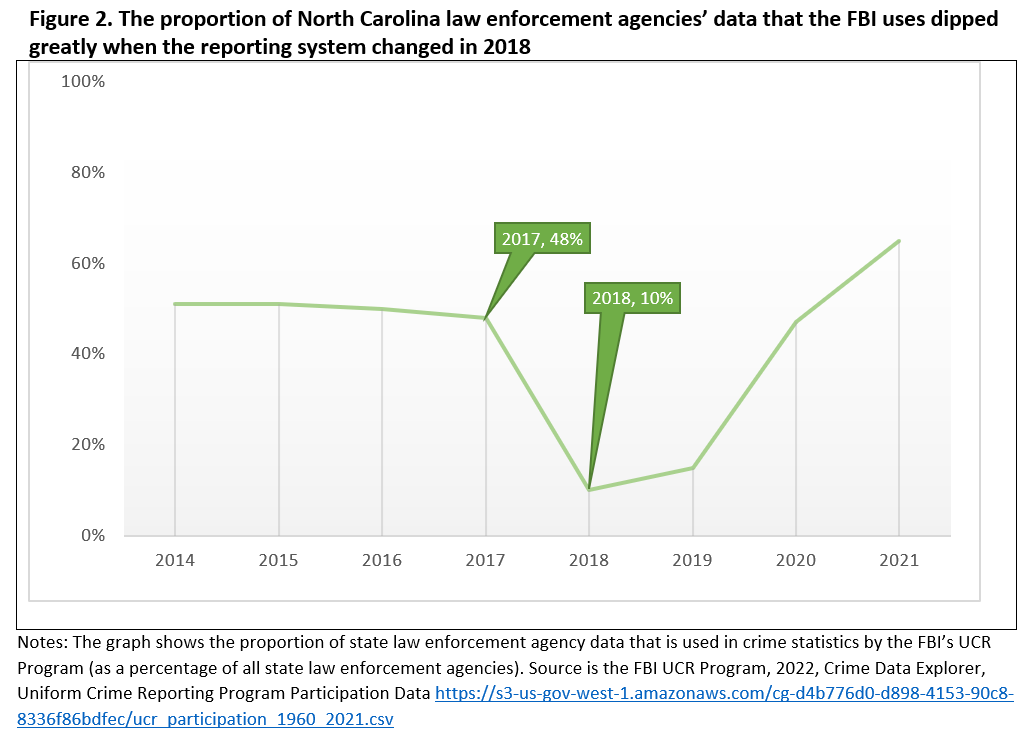 The Lab’s Measuring Justice Dashboard presents data on criminal charges and many related measures, from the state court system’s Automated Criminal/Infraction System. These data contain detail from the initiation of a criminal charge forward. The Dashboard shows data visualizations at the county and state level and currently has eight years of data, from 2014 through 2021.

The obvious limitations of these data is that, like the UCR, they don’t capture instances that are neither reported to nor detected by law enforcement, and they don’t include crime that doesn’t result in a criminal charge. However, the advantage of using this data source is that, unlike the police reported data where the standard recently changed, the data source has remained consistent over time.

Given this basic understanding of the strengths and limitations of police reported and court data, what can we say about recent changes in rates of violent crime? The answer is that the data from the two sources show different trends.

Trends according to police data from the SBI

Second, there’s a dip in the rate from 2017 to 2018. According to correspondence with the SBI, that dip occurred in part because of the shift from the old reporting standard to the new NIBRS standard. Presumably, the temporary drop-off in the number of law enforcement agencies that submitted usable data influenced the estimate. 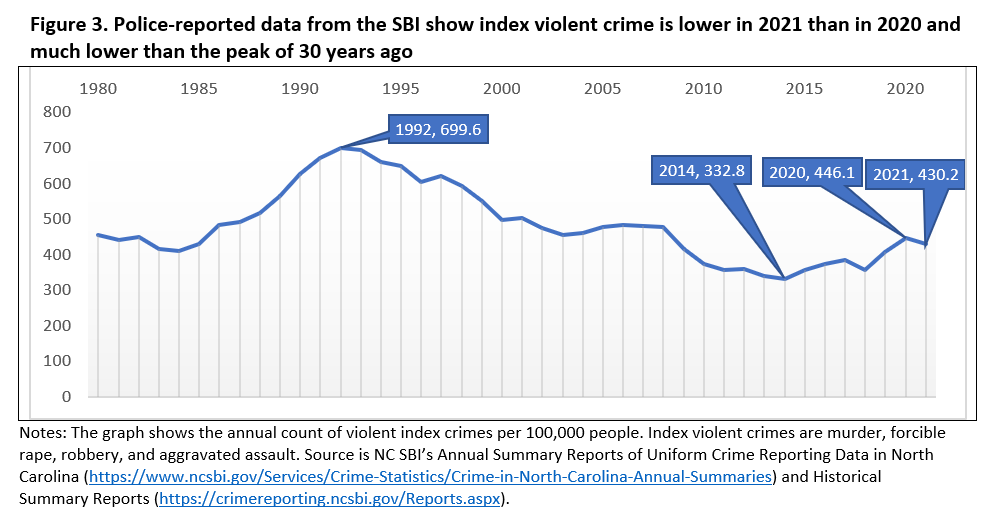 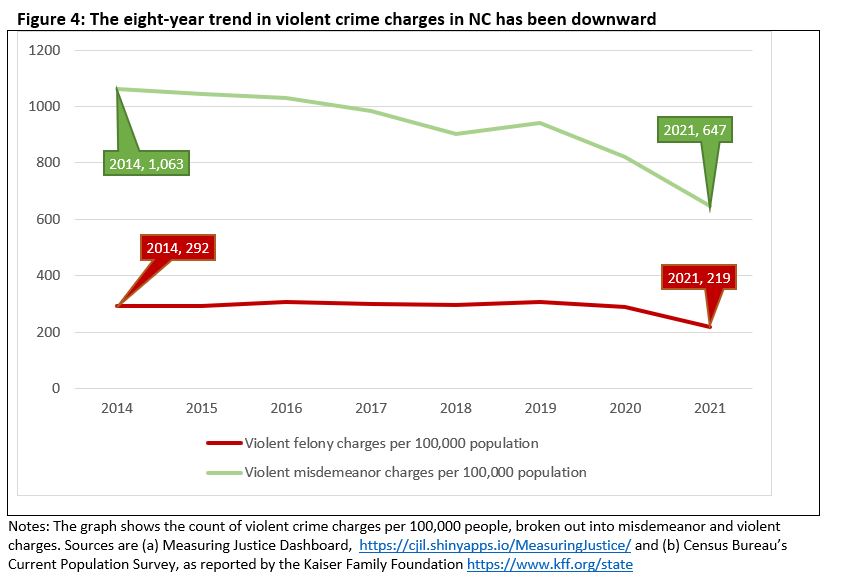 Putting it all together: What do the data tell us?

Why has the trend in violent crime charges been falling consistently while the trend for police-reported index violent crime has not? One possible reason is that police data have been limited to index offenses, which may have trends that are different from trends for violent crime overall. The shift to the NIBRS standard should help address this concern because these data allow multiple crimes from a single event to be included.

It is clear that more understanding is needed around trends in violent crime. First, future work should present and interpret trends at the county and municipality level. Second, because not all violent crime is reported, we need to understand state trends in victimization from crime.

Aside from these considerations, what are the take-aways from the data? Although the data do not support one simple story, there are a few take-away points: