Use of Summons v. Arrest in North Carolina Misdemeanor Cases: A County-Level Analysis

Under state law, pretrial conditions must be set after a defendant is arrested for a crime, and this typically occurs at the initial appearance before a magistrate. G.S. 15A-511. Although state statutes express a preference for non-financial conditions (written promise to appear, custody release, and unsecured bond), G.S. 15A-534(b), secured bonds are the most commonly imposed pretrial condition in North Carolina. See Jessica Smith, How Big a Role Does Money Play in North Carolina’s Bail System (July 2019). Much has been written about the problems of using money to detain pretrial, including the unfairness of incarcerating people not because they are risky but because they are poor. Thus, in discussions about procedural reform, there is interest in making sure that law enforcement and court officials only execute or order arrests in cases where arrest is in fact required. If, in low-level cases for example, the officer opts for a citation instead of a warrantless arrest or the magistrate opts for a summons instead of an arrest warrant, the defendant simply is directed to appear in court to answer the charges. Since the defendant is not taken into custody, there is no initial appearance or setting of conditions, which again, skew towards secured bonds and create the potential for wealth-based detentions and other negative consequences. This explains why stakeholders are looking at citation and summons in lieu of arrest policies, either as stand-alone reforms or as part of broader bail reform efforts. As stakeholders explore these matters, they are asking questions about the prevalence of citation and summons use in their communities. In a paper here, we present data regarding citation usage in North Carolina. In this paper, we focus on usage of the criminal summons.

Working with court system data we compiled a statewide and county-level analysis of the prevalence of summons use in North Carolina. Because we knew that a misdemeanor charge with an associated felony was more likely to result in arrest, we limited our data to cases where the highest charge was a misdemeanor. Specifically, we examined North Carolina Administrative Office of the Courts (NC AOC) data on initial process type. For this analysis, we were interested in the percentage of highest charge misdemeanor cases where the magistrate issued a summons opposed to an arrest warrant. Because we wanted to see any trends in the data, we did all this for three years, 2016-2018.

A spreadsheet of our results is available here. Looking just at 2018, the statewide percentage of misdemeanor cases initiated by a summons (as opposed to an arrest warrant) is 32.9%, showing that statewide the summons is used in only a minority of misdemeanor cases. This is interesting given that the statutes seem to contemplate limited use of warrants and a number of bond policies encourage use of summons in lieu of arrest. As to the statutes, G.S. 15A-304(b)(1) provides that a warrant for arrest may be issued, instead of a criminal summons “when it appears . . . that the person . . . should be taken into custody.” 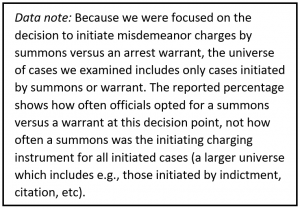 Circumstances to be considered in the determination of whether custody is required “include, but are not limited to, failure to appear when previously summoned, facts making it apparent that a person summoned will fail to appear, danger that the person accused will escape, danger that there may be injury to person or property, or the seriousness of the offense.” Id. The statute further provides that in citizen-initiated cases, the official “shall not issue a warrant for arrest and instead shall issue a criminal summons” unless the official finds that certain circumstances exist. G.S. 15A-304(b)(3) (emphasis added). As to the bond policies, our review indicates that fourteen local bond policies encourage the use of summons instead of warrants in appropriate cases. See, e.g., Rules Relating to Bail and Pretrial Release for Judicial District 16B (June 2001) (“Clerks and magistrates are encouraged to use a criminal summons instead of warrants for arrest in appropriate misdemeanor and felony cases. G.S. §15A-303.”). In light of these statutory and local bond policy provisions, it was surprising to find that the summons is used in only a minority of misdemeanor cases. 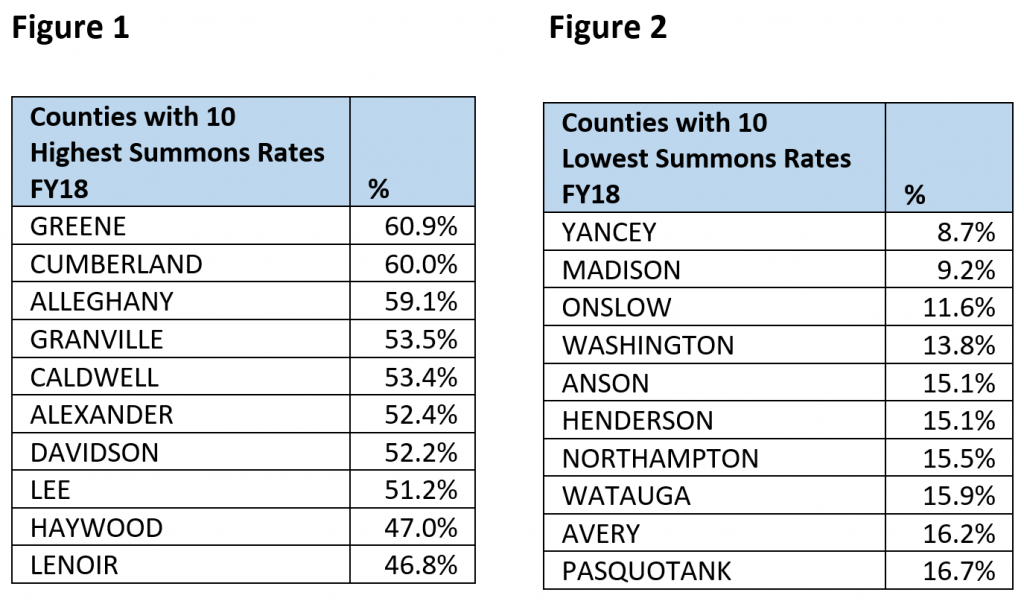 Looking to better understand local summons usage, we compared our results to NC State Bureau of Investigation violent crime rates and to whether or not the Local Bail Policy supported summons in lieu of arrest for minor offenses. We found no obvious relationships to either of those benchmarks. In further research we hope to connect with court officials to learn what is driving local practices.

As with our paper on prevalence of citation use in North Carolina, we are not making any judgment here. There may be very good reasons why judicial officials in any given county use criminal summons in a smaller percentage of misdemeanor charges. For example if the majority of misdemeanor charges in a jurisdiction involve violence or firearms, we would not be surprised to see a lower rate of summons usage, as many believe these scenarios present a greater public safety risk. The purpose of this paper simply is to document the prevalence of summons use in North Carolina and give jurisdictions a baseline against which to evaluate their systems.

We end with three notes about the data. First, although we sought to limit our analysis to cases where the highest charge was a misdemeanor, our efforts may have been imperfect. We worked off of a NC AOC data set showing the initial process type issued for highest charge misdemeanor cases. When multiple charges are associated in a single case number, the system can limit the data set to highest charge misdemeanor cases. We understand, however, that in some counties multiple charges are not associated with the same case number. When this happens, the system cannot separate misdemeanor charges from associated felony charges because they are not linked through a common case number. Thus, some of the misdemeanor charges in our sample may have been associated with a felony. (To the extent this occurred we hypothesize that it would suppress summons rates.) Second, we sought to examine first process type (i.e. the process that initiated the case) and we understand that for the most part the data we received reflects that. However, we also understand that in some cases the clerk may have updated the relevant field to reflect a later process, such as a statement of charges. If that occurs, original charge information is overwritten and the charge would not be captured in our analysis (which looked only at highest charge misdemeanor cases where the initial process was a summons or arrest warrant). Finally, although a magistrate’s order is the proper process when an officer makes a warrantless arrest, we know that sometimes an arrest warrant is issued after a warrantless arrest. Instances where this occurred would be tracked as an arrest warrant issued by a magistrate (inflating those numbers), even though the initial decision to arrest was made by an officer.