The Old Bailey: A Typical Trial Docket in an Atypical Setting

Earlier this week, the students and I spent the afternoon at Central Criminal Court in London, formerly called the Old Bailey and located at the intersection of Old Bailey and Newgate streets in the heart of London’s law district. I can guarantee that this post will not be as captivating as Rumpole of the Bailey, the British television series about fictional barrister Horace Rumpole. But, like most trips to court, it was certainly interesting.

What’s similar? As in many districts in North Carolina, the historic courthouse is still standing, but most cases are handled in a modern annex next to the courthouse. It’s pretty easy to tell the old (at the front of the photo) from the new (toward the back): 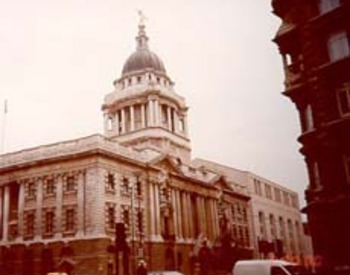 As in North Carolina, the UK also has two levels of court: Magistrates Court for less serious offenses and the Crown Court for more serious ones, which are handled at Central Criminal Court where we visited.

On the day we went to Central Criminal Court, the students learned of another similarity between US and UK trials—they do not always run smoothly. They start, they stop, and they start again to accommodate the complicated demands of presenting witnesses and evidence, hearing argument, resolving legal questions, and other developments. If you’re in London and interested in going, you can sit in the public gallery and watch the proceedings (as long as you don’t bring your phone or other electronic devices, including a bluetooth fitness watch as this embarrassed instructor learned after warning the students not to bring any prohibited devices).

What’s different? The students noticed several differences. First, of course, the wigs. Barristers (trial lawyers in the UK) still wear wigs and gowns in criminal cases, but those accoutrements aren’t required in other cases. I can’t provide an informed explanation of the practice. I can say it’s striking to see a wigged and gowned barrister cross-examine a witness and deliver a closing argument while looking at his or her notes on a laptop.

The students also found it odd, as did I, that the defendant sits in a “dock,” a glass enclosure at the back of the courtroom away from the judge and attorneys, including the defendant’s attorney. The students quickly grasped that this arrangement may suggest to the jury that the defendant is dangerous and must be kept apart from others in the courtroom, potentially undermining the presumption of innocence. It also makes it darn difficult for a client to communicate with his or her attorney. Advocacy groups have called for discontinuing the dock and, as in the US, for using security measures only when shown to be necessary in a particular case. See In the dock: Reassessing the use of the dock in criminal trials (Justice, 2015).

Other differences we observed include, among others, placement of defense counsel’s table, rather than the prosecutor’s table, closest to the jury; and the ability of jurors to ask questions by submitting them to the judge, who decides whether to pose them to witnesses. You can find a more detailed discussion of British jury trial practices in Nancy S. Marder, Two Weeks at the Old Bailey: Jury Lessons from England, 86 Chicago-Kent Law Review 537 (Apr. 2011). The author identifies practices that American courts should consider adopting, such as simpler jury instructions, and practices we should avoid, such as the dock.

Next week we head to Middle Temple, one of the historic Inns of Court in London and a center of legal activity in London. It should be an excellent place to discuss the all-important right to representation by counsel. Cheers.