The Grid behind the Grid

The felony and misdemeanor sentencing grids tell us who can get probation. Community Corrections has its own grid that determines how that probation will be carried out.

By statute, the Division of Adult Correction and Juvenile Justice must have a “plan to handle offenders sentenced to community and intermediate punishments.” G.S. 15A-1343.2(b). That plan has to incorporate the results of a validated instrument that places each probationer in a “supervision level” based on his or her “risk of reoffending and criminogenic needs.” G.S. 15A-1343.2(b1).

Community Corrections does those things in its administrative policy. They use the risk-needs assessment process described here to sort probationers into five supervision levels (Level One is the most serious, Level Five is the least serious—like DWI), and those supervision levels factor into a “noncompliance grid” that dictates how probation officers respond to different types of violations. 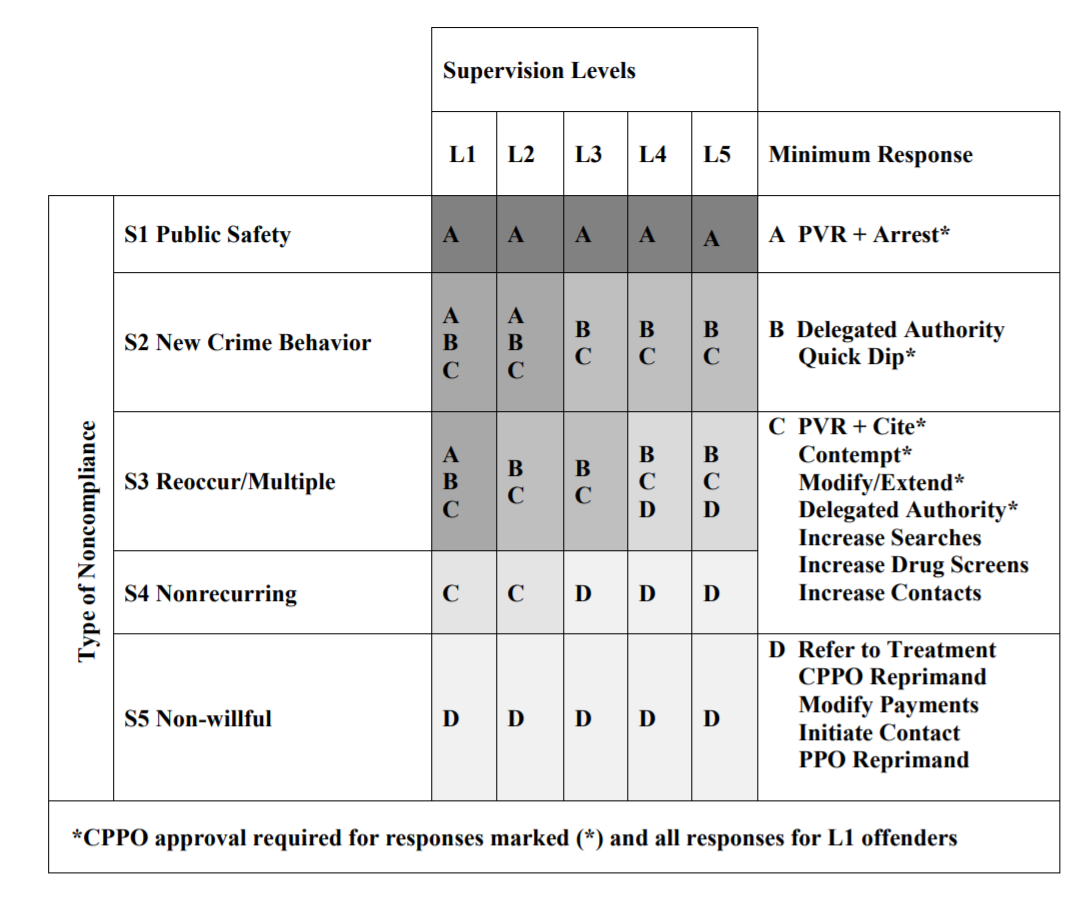 As you can see, noncompliance is sorted into five severity categories: (1) public safety, (2) new crimes, (3) reoccurring/multiple violations, (4) nonrecurring violations, and (5) non-willful noncompliance. The policy recognizes that there is overlap between the categories, and leaves it to officers’ professional judgment to categorize noncompliance appropriately. Community Corrections Policy § C.0203 (“Categorizing violations is not an exact science; officers are expected to use their professional judgment in determining, for example, when a new criminal act or a combination of a new criminal act and technical violations constitute imminent threat to public safety and should thus be categorized as S1 instead of S2.”).

The five severity category rows intersect with five supervision level columns, with the box at each intersection setting forth the appropriate response when that type of noncompliance is committed by that level of probationer. Response types are sorted into four categories, ranging from things like a reprimand from the officer (a Class D response), to a quick dip (Class B), to the filing of a probation violation report and issuance of an order for arrest (Class A).

Severity 5 noncompliance presents a noteworthy application of that rule. Severity 5 is defined as “noncompliance . . . . attributable to circumstances beyond the offender’s control.” Id. § C.0203(e). Regardless of the probationer’s supervision level, the grid says non-willful noncompliance always calls for a Class D response—a category that includes a referral to treatment, a reprimand by the officer or chief, a contact by the officer, or a modification of payments. Those options make sense, as no non-willful noncompliance should ever result in revocation. See State v. Duncan, 270 N.C. 241 (1967) (“[A] defendant’s probation should not be revoked because of circumstances beyond his control.”).

Nevertheless, a situation I hear about sometimes is a probationer being brought before the court (especially near the end of probation) for a failure to pay his or her monetary obligations. The judge asks the officer if the probationer had the ability to pay, and the officer—who may know as much about the defendant’s financial situation as anyone—says no. That leaves the judge to ask why the failure to pay was styled as a willful violation on the probation violation report in the first place. Technically the defendant bears the burden of establishing a good faith inability to pay, State v. Tate, 187 N.C. App. 593 (2007), but unless the officer is overriding the grid, the better practice for an officer who knows that a probationer’s failure to pay is non-willful would be to bring the issue to the court as a request for modification without violation. That would be more consistent with the Class D response generally appropriate for that kind of noncompliance.

Use of so-called graduated sanctions informed by the results of a risk assessment is considered state of the art when it comes to probation supervision, but it is not without controversy. An appellate court in Tennessee recently held that state’s relatively new system of graduated sanctions violated separation of powers and due process principles to the extent that it allowed officers to make summary decisions on issues “exclusively within the province of the judiciary.” State v. Price, No. W2017-00677-CCA-R3-CD, 2018 WL 3934213, at *1, *8 (Tenn. Ct. App. Aug. 14, 2018). Tennessee’s system is different than ours, in that officers there appear to be able to add conditions without the same process for court review that would apply to delegated authority in North Carolina. Still, our regime (including quick dips) is essentially untested in the courts, making cases like Price worth a look.