Satellite-Based Monitoring Is Unconstitutional for All Unsupervised Recidivists

The Supreme Court of North Carolina held in State v. Grady, ___ N.C. ___ (2019), that satellite-based monitoring (SBM) of sex offenders is unconstitutional as applied to any unsupervised person who was ordered to enroll in SBM solely because he or she is a recidivist. By unsupervised, the court meant a person not on probation, parole, or post-release supervision. Today’s post takes a closer look at the Grady decision and what it may mean for North Carolina’s SBM program going forward.

We’ve been writing about Grady on this blog since 2015. Let me see if I can bring you up to speed in one paragraph. Torrey Grady was convicted of second-degree sexual offense in 1997 and indecent liberties with a child in 2006. At a 2013 bring-back hearing, he was ordered to enroll in SBM for life, which is statutorily mandatory for a recidivist. G.S. 14-208.40(a)(1). North Carolina’s courts rejected his argument that SBM is an unconstitutional search, concluding that Fourth Amendment precedent related to GPS technology didn’t apply to a civil regime like SBM. State v. Grady, 233 N.C. App. 788 (2014). The Supreme Court of the United States vacated those decisions, noting that civil regimes, too, can include searches within the meaning of the Fourth Amendment. The Court remanded the case to North Carolina for a determination of whether SBM is a reasonable search. Grady v. North Carolina, 135 S. Ct. 1368 (2015). On remand, the trial court concluded that SBM was reasonable and therefore constitutional. A divided court of appeals reversed, as discussed here, concluding that SBM was an unconstitutional search as applied to Mr. Grady, largely because the State failed to present any evidence of the efficacy of SBM. The State appealed as of right based on the dissent, which brings us to the most recent decision of the Supreme Court of North Carolina.

As instructed by the Supreme Court of the United States, North Carolina’s high court walked through a totality-of-the-circumstances analysis to evaluate the constitutionality of the search, balancing the defendant’s “reasonable privacy expectations” against the “legitimate governmental interests” motivating SBM. I won’t walk through the entire analysis, but let me highlight a few items that I think might be important in considering Grady’s reach.

On the privacy side of the balance, a key to the court’s analysis was that, when it comes to recidivists, the statute requires the trial court to impose lifetime SBM with no individualized assessment of the offender or his or her offense characteristics on the front end. Meanwhile, the back-end procedure for removing a person from SBM (G.S. 14-208.43) goes before the Post-Release Supervision and Parole Commission, not a judge—and so far, every enrollee who has petitioned the Commission for removal has been denied relief. The court also noted that the device weighs a half-pound and requires the enrollee to spend two hours charging it each day, “tethered to the wall,” slip op. at 13, rejecting the State’s argument that this was a mere inconvenience.

On the government interest side of the balance, the court concluded that the State did not present any empirical evidence demonstrating that the SBM program effectively advances its interests in protecting the public or investigating and deterring crimes.

Balancing those factors, the court concluded that SBM violated the Fourth Amendment as applied to Mr. Grady. Not only that, the court said, it is unconstitutional for any individual in the same category as Mr. Grady—which is to say anyone enrolled solely by virtue of being a recidivist who is not on probation, parole, or post-release supervision.

The court described its holding as “neither squarely facial nor as-applied.” Slip op. at 60. It is as-applied in the sense that it applies only to the “current implementation of the SBM program”; does not apply to defendants still under probation, parole, or PRS; and does not apply to defendants enrolled in SBM for a reason other than being a recidivist (like being an aggravated offender, a sexually violent predator, a person convicted of rape or sexual offense of a child by an adult). As to unsupervised recidivists, however, it is facial, and the court “enjoin[ed] application of mandatory lifetime SBM to other unsupervised individuals when the SBM is authorized based solely on a ‘recidivist’ finding.” Slip op. at 61.

I had previously conceptualized the “Grady hearing” (the part of the SBM determination hearing where a trial judge considers the reasonableness of SBM) as a judicial gloss that might save an otherwise unconstitutional statute by limiting its application to the subset of offenders for whom the State could establish its reasonableness. Sure, we didn’t yet have an example of an appellate case where the State had made the required showing (particularly on the issue of effectiveness), but I assumed it might be possible with the right record evidence. After this latest chapter of Grady, it is not possible in recidivist-only cases once their probation, parole, or post-release supervision ends—at least not under the “current implementation of the SBM program.”

With that in mind, is there any reason at all to conduct a reasonableness inquiry in recidivist-only cases? I might have thought there would be, to determine whether the search was reasonable during the term of probation or PRS supervision. But in limiting its holding to unsupervised offenders, the court appeared to say that SBM is indeed mandatory for recidivists during their term of supervision. Slip op. at 67 (“[B]ecause of the independent statutory provisions governing conditions for parole, post-release supervision, and probation, an individual who is a recidivist is still automatically subject to SBM during the period of State supervision.”).

I also wonder how much the SBM program will need to evolve from its “current implementation” before it falls outside ambit of the facial holding in Grady. For instance, would a new device make a difference? In fact, DACJJ has already moved on from the ExacuTrack One device discussed in the opinion to something called the LOC8 device.

The new device weighs 5.5 ounces instead of 8.7 ounces, and it has a removable battery pack that can be charged without “tethering.”

So what happens now? To the extent that the court’s ruling is styled as an injunction, it would seem that anyone who falls into the “facial” unsupervised recidivist-only category ought not to be tracked any longer. See slip op. at 61 (“[O]ur holding . . . enjoins application of mandatory lifetime SBM to other unsupervised individuals . . . .”).  My understanding is that there are over 200 such persons currently wearing the device. The mandate in the case issued on September 5, 2019.

Grady’s applicability to enrollees in categories aside from recidivists remains to be seen. As a reminder, the other statutory categories of lifetime SBM are defendants convicted of aggravated offenses, sexually violent predators, and those convicted of rape or sexual offense with a child by an adult. Aggravated offenses, you may recall, are those involving vaginal, anal, or oral penetration through the use of force or the threat of serious violence, or with a victim who is under 12—which our courts have interpreted as including only rapes. (The dissent’s characterization of Grady’s sexual offense conviction as an aggravated offense, see slip op. at 5, n. 2 (Newby, J., dissenting), would be a departure from our existing case law from the court of appeals, see State v. Green, 229 N.C. App. 121 (2013), but the supreme court has never squarely ruled on the question.) The other enrollment category is persons convicted of an offense involving the physical, mental, or sexual abuse of a minor who require monitoring for a period set by the court based on the results of a risk assessment (usually a Static-99) or other findings. 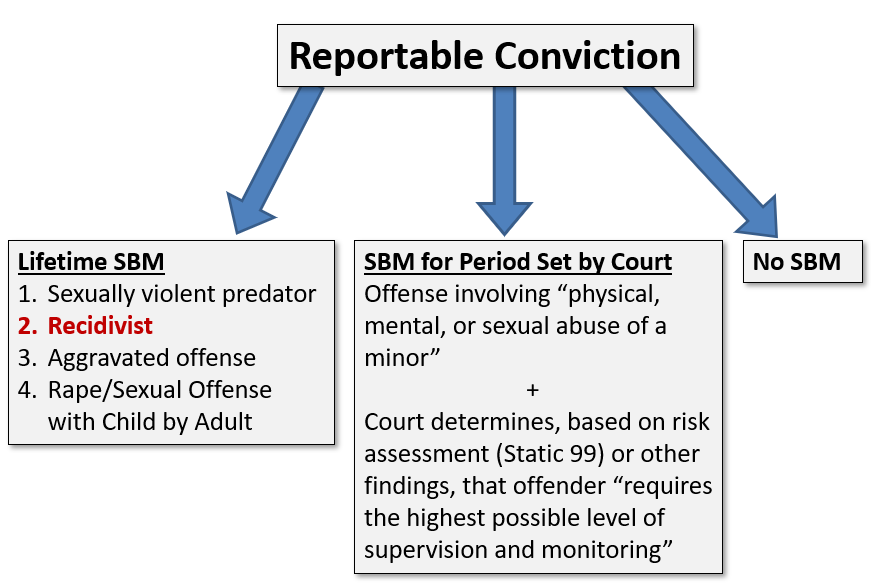 Sexually violent predators and abuse-of-a-minor defendants receive a front-end, individualized assessment of risk that might differentiate them from recidivists. But if we assume for the sake of argument that the intrusiveness and effectiveness prongs of the reasonableness balancing test are roughly the same for these categories as they were for recidivists, then it seems that all of them could be on shaky constitutional footing after Grady. We may know soon, as more cases are pending before the supreme court.