After former Chief Justice Mark Martin’s North Carolina Commission on the Administration of Law and Justice issued its final report recommending that North Carolina embark on bail reform pilot projects, North Carolina Judicial District 30B launched the first such project. Judicial District 30B consists of two rural counties in Western North Carolina: Haywood and Jackson. Among other things, the district is not served by a public defender, has no pretrial services, and in one of the counties caseloads are such that District Court is not held daily. The collaborative pilot project was led by Senior Resident Superior Court Judge Bradley Letts and involved a broad range of stakeholders including the District Attorney, local defense lawyers, District Court judges, magistrates, clerks of court, police chiefs, representatives from the Sheriffs’ departments, and more.

I supported stakeholders efforts, and as I describe in more detail in a report here, stakeholders unanimously adopted five reforms:

Reforms took effect January 1, 2019. The first reform involved adoption of a structured decision-making tool designed to focus decision-makers on a series of defendant- and offense-specific factors relevant to the pretrial decision. The tool also expressly incorporated into decision-making the statutory mandate that a written promise, custody release, or unsecured bond must be imposed unless those conditions “will not reasonably assure the appearance of the defendant as required; will pose a danger of injury to any person; or [are] likely to result in destruction of evidence, subornation of perjury, or intimidation of potential witnesses.” G.S. 15A-534(b). With respect to the second reform, state law does not require first appearances for in-custody misdemeanor defendants. As a result, before this reform was implemented, in-custody misdemeanor defendants could spend days or weeks in custody on a secured bond imposed by a magistrate before a judge ever reviewed their conditions of release. The third reform was possible because of the involvement of North Carolina Indigent Defense Services, which provided contract counsel to staff the new first appearance proceedings being held for lower-level defendants. Detail on all of the reforms is included in the report noted above.

Professor Jamie Vaske of Western Carolina University led an empirical evaluation of the project to measure the impact of stakeholders’ efforts. Her full report (here) contains detailed information about the project’s impact. I highlight here some of the top line results from that report.

The percentage of cases in District 30B receiving a non-financial condition of release (written promise, custody release, or unsecured bond) increased 43.79% in 2019 compared to 2018.

Figure 1. Change in Conditions of Release 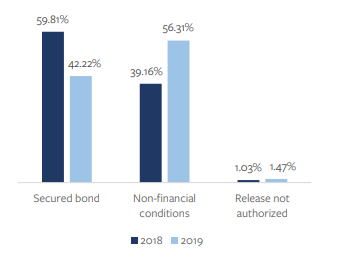 Figure 2. Change in New Criminal Charges during the Pretrial Period

On average, about 80% of defendants attended court as required in both 2018 and 2019. Notwithstanding the significant increase in non-financial conditions of release, the counties experienced only a 1-2 percentage point increase in court non-appearance rates in 2019 as compared to 2018.

Figure 4. Percent of Defendants Released on an Unsecured Bond at First Appearance 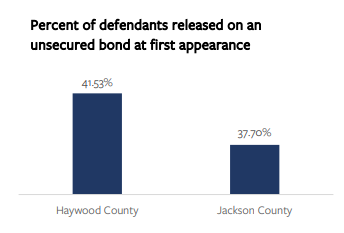 Also, of those defendants who were held on a secured bond at the end of their first appearance hearing, defendants in Haywood County were two times more likely to have their bond amounts reduced than defendants in Jackson County.

Because the Haywood County jail supplied jail data to researchers, the evaluation was able to examine changes in pretrial detention in that county. Evaluation results show that the number of bookings for pretrial detention in the Haywood County Detention Center decreased, on average, .04% in 2019 compared to 2018. However, defendants were detained for shorter periods of time. Specifically, the percentage of bookings held for 1 or 2 days increased in 2019 while the percentage of bookings resulting in longer pretrial jail stays (3+ days and 10+ days) decreased in 2019 relative to 2018. 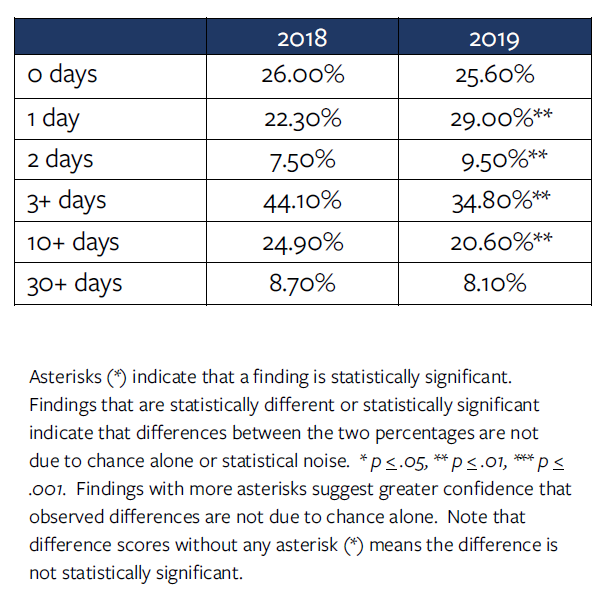 Summons & Citation in Lieu of Arrest

What’s next? Quarterly results from the 30B project were released throughout 2019 and attracted attention in other North Carolina jurisdictions. In 2019 I supported the work of two additional judicial districts that embarked on similar collaborative projects. Both of those districts implemented bail reforms effective January 1, 2020, including their own versions of a structured decision-making tool, modeled on the one implemented in District 30B. Reports detailing those projects are available here and here. The Criminal Justice Innovation Lab sought and obtained grant funding to do a rigorous assessment of the impact of those projects, and that work is ongoing. We hope that results from the new evaluation will provide still more data to inform stakeholders’ efforts to implement evidence-based pretrial practices.