What do the topics in the title of this blog post have in common? They were the focus of the students’ criminal justice presentations this week. Nine teams of students, two on each team, have been researching and preparing their presentations throughout the semester. Here are some of my takeaways from the first set of presentations. 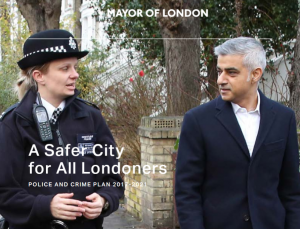 Last year, the Mayor of London (Sadiq Khan, pictured) and London’s Metropolitan Police Service (MPS) issued a five-year plan detailing their priorities. The report emphasizes the importance of neighborhood policing, recognizing the need to put dedicated officers, “who know and are known to the communities they serve, back at the heart of policing in London.” Id. at 24. Doing so has two effects according to the report. It allows officers to address the crime and safety problems that most concern the residents and businesses in their local area. “At the same time, we want trust and confidence in the MPS to increase, particularly in those communities that have consistently lower levels of confidence” in the police. Id. at 26.

The report recognizes that deep budget cuts in the last several years make it difficult for the MPS to fully implement neighborhood policing. The comparative lack of diversity in the MPS also may pose obstacles to the goal of increasing trust in communities of color. Of the police forces in the UK, London’s MPS “had the highest proportion of BME [Black and Minority Ethnic] police officers, with 14% of officers identifying themselves as BME but still this was well below the proportion of BME people resident in the capital (40%).” Police Workforce, England and Wales, 31 March 2018, Statistical Bulletin 11/18, at 28 (Home Office, July 2018). Still, the very act of issuing written priorities helps to keep residents informed and provide accountability.

DNA databases and privacy. Another team of students tackled the challenging area of DNA and its forensic use. One of the liveliest discussions of the day concerned DNA databases and the UK’s approach in particular. UK law has authorized the collection of DNA samples on arrest for any offense for which a sentence of imprisonment may be imposed (called recordable offenses), including minor offenses. Further, the law authorized the indefinite retention of the records whether or not the person was convicted. See GeneWatch UK, Facts and Figures.

Two men in the UK, one who had been acquitted and one whose charges had been dismissed, challenged the retention of their DNA records. The UK courts upheld the retention scheme, and the two men applied for relief to the European Court of Human Rights (pictured). The Human Rights Court found that the UK’s blanket retention of DNA records of people who had not been convicted of a crime interfered with their right to a private life. See S. and Marper v. United Kingdom, 2008 Eur. Ct. H.R. 1581 (Dec. 4, 2008). The Human Rights Court recognized that DNA profiles contain unique, sensitive, highly personal data. While the UK certainly has an interest in using such information to detect crime, the retention scheme failed “to strike a fair balance between the competing public and private interests.”

The tech-savvy students in my class shared the concerns expressed by the Human Rights Court about the potential interference with privacy:

[B]earing in mind the rapid pace of developments in the field of genetics and information technology, the Court cannot discount the possibility that in the future the private-life interests bound up with genetic information may be adversely affected in novel ways or in a manner which cannot be anticipated with precision today.

In response to the Human Rights Court decision, the UK enacted the Protection of Freedoms Act 2012, which among other things requires destruction of DNA records after varying time periods if the person is not convicted. Compare G.S. 15A-266.3A (specifying offenses for which DNA samples may be taken on arrest in North Carolina and requiring destruction of DNA records if, among other things, the accused is acquitted or the charges are dismissed).

Mental health liaison and diversion. Another team of students compared treatment in the US and UK of criminal defendants who have a mental illness. Among other things, the team looked at the UK’s Liaison and Diversion (L & D) program, a part of the National Health Service.

Created in 2010, the L & D program is a cross-government initiative to address the high level of mental health needs of people who come into contact with the criminal justice system. For example, an estimated 31% of justice-involved youth (ages 13 to 18) have mental health needs. Once a person is identified, the L & D program screens, assesses, and refers the person for treatment as needed. L & D services may be requested by a range of people, including health care providers, police officers, adult and juvenile court officials, and defendants. The program includes training for criminal justice officials to help them identify mental health needs and other signs of vulnerability.

The process does not mean that offenders are “let off the hook,” in the words of the L & D website. With the individual’s consent, information is shared with criminal justice officials to help them make more informed decisions about case management, including charging, diversion, sentencing, and other dispositions. Again in the words of the L & D website, the process does not necessarily provide “a softer option” for offenders. It provides a “route into treatment for people whose offending behaviour is linked to their illness/vulnerability” and, by addressing their health needs, contributes “to longer term reductions in offending behaviour.” See NHS England, Liaison and Diversion: Frequently Asked Questions

Not surprisingly, opinions differ in the UK about prisons and prison programs. This headline from a 2017 Daily Telegraph article—Britain’s cushiest jail: The super-prison where inmates are ‘men not offenders’—as well as the article’s description of the “amenities” at the prison indicate the newspaper’s views about being too soft on criminals. Many others (for example, here and here) argue that UK prisons are harsh environments, are getting harsher, and fail to fulfill their rehabilitative purposes, to the detriment of both former inmates and society in general. Most seem to agree, however, on the importance of reintegrating offenders into society.

Next week, five more teams of students take on more criminal justice challenges. I will report on what I learn from them.