On Probation: A New Graphic Novel

We wrote another comic book. This one is about probation. 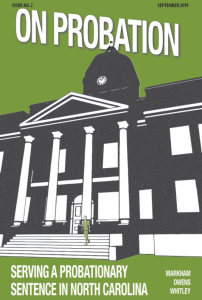 I’m pleased to announce the availability of the School of Government’s second graphic novel, On Probation: Serving a Probationary Sentence in North Carolina. It is available for purchase here. I wrote it along with my friend Chad Owens, who is the senior policy administrator for the Community Corrections section of the North Carolina Department of Public Safety. Jason Whitley, a talented designer and artist who works at UNC’s School of Pharmacy, did the illustrations.

The book is a follow-up to our first graphic novel, In Prison, Serving a Felony Sentence in North Carolina. The second issue begins at the same moment as the first: sentencing of a Prior Record Level I defendant convicted of a Class G felony. But in this book, instead of receiving an active sentence, the defendant’s 10-21 month term of imprisonment is suspended and he is placed on probation for 36 months. 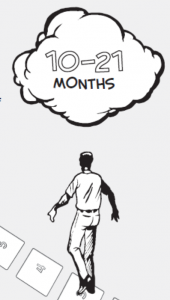 The book then follows how a typical case would play out from that point, from the risk-needs assessment that probation officers do during the first 60 days of supervision to the eventual possibility of revocation, termination, or expiration. We incorporated most of the key components of Justice Reinvestment related to probation, including quick dips, CRV, and the distinction between new crimes, absconding, and technical violations of probation.

As with In Prison, the primary intended audiences for the book are defendants, victims, and their families. Our intention was to describe, in the plainest language we could, what probation and probation violation hearings are really like. I hope that probation officers, lawyers, and judges might also find it useful, both for themselves and as a tool to explain the law to those who don’t work in the court system. I say this in the book’s introduction, but it bears mentioning again: I hope no one is offended by our effort to present a serious subject in illustrated form. The goal (as with any of my publications, actually) is to present the information in the most accessible way possible.

I want to thank Chad and Jason for creating the book with me, and my colleagues Kevin Justice, Melissa Twomey, and Owen DuBose for their work producing it. I also want to thank the North Carolina Conference of District Attorneys and the Department of Public Safety for their support of the project. 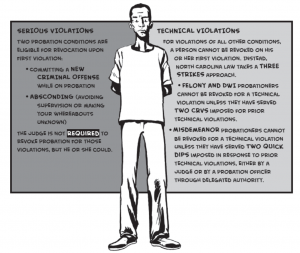 One comment on “On Probation: A New Graphic Novel”