Not Responsible for Broken Windshields 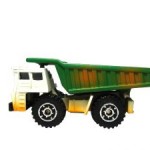 As I pulled out of the parking lot after work the other day, I found myself immediately behind a dump truck. On the back of the truck was the following advisory: “Stay Back 300 Feet. Not Responsible for Broken Windshields.” I have often wondered whether such statements have any legal effect. I was particularly curious about it in this instance, since the truck was stopped at a stoplight. Was I really supposed to leave a football field’s worth of distance between the truck and my car as we sat there on Highway 54?

I don’t think so. By statute, “[n]o vehicle shall be driven . . . on any highway unless the vehicle is constructed and loaded to prevent any of its load from falling, blowing, dropping, sifting, leaking, or otherwise escaping therefrom.” G.S. 20-116(g)(1). Furthermore, large vehicles like dump trucks that are “loaded with rock, gravel, stone, or any other similar substance . . . that could fall, blow, leak, sift or drop shall not be driven . . . on any highway unless . . . [t]he load is securely covered by tarpaulin or some other suitable covering” to prevent spillage. G.S. 20-116(g)(2). Violation of these statutes is an infraction, punishable by a fine of up to $100. G.S. 20-176. In other words, if a rock spills out of a dump truck, the driver of the dump truck has probably committed an infraction. I don’t believe that one can disclaim responsibility for the crimes and infractions that one commits.

In fact, I don’t believe that one can unilaterally disclaim responsibility even for simple negligence that doesn’t amount to a crime or an infraction. I’ll admit that I’m no expert in matters of civil liability, but I can’t believe that if I go around wearing a button that says “not responsible for my negligent acts,” that I’ve accomplished anything. Cf., e.g., Brockwell v. Lake Gaston Sales and Service, 105 N.C. App. 226 (1992) (holding that a boat storage and repair facility could not use a disclaimer to “exculpate itself from liability for its own negligence”); Parent Teacher Ass’n Public School 72 v. Manufacturers Hanover Trust Co., 138 Misc. 2d 289 (N.Y. City Civ. Ct. 1988) (although a bank put an advisory on its statements to the effect that it was not liable for wrongly paid checks unless promptly notified of the error, “[u]nilaterally placing such an admonition on the statement could not alter the agreement of the parties or further limit the bank’s liability”); Rubin v. AMC Home Inspection, 418 A.2d 306 (N.J. Super. Ct. 1980) (“As unilateral statements of defendant, the content of [the home inspection report and cover letter] are not binding upon plaintiffs. Thus, the disclaimers of any guarantee or warranty as contained in the inspection report and the accompanying letter” have no legal effect.).

To summarize, then, my view is that a driver whose car is damaged by a rock spilled by a dump truck could file a negligence action for damages, and the advisory and disclaimer on the dump truck would not bar recovery because (1) it is unilateral and therefore ineffective, and (2) one cannot disclaim liability for crimes and infractions. Cf. generally Lee v. Rowland, 11 N.C. App. 27 (1971) (plaintiff alleged that a brace used on a truck bed was negligently designed and installed, and fell off, smashing her windshield and injuring her; her claims presented a jury question). Perhaps a violation of G.S. 20-116 would even be deemed negligence per se. Some provisions of Chapter 20 expressly state that violations are not negligence per se. See, e.g., G.S. 20-137.1 (child restraint systems required); 20-137.4 (use of cell phone by school bus driver). No similar provision appears in G.S. 20-116, suggesting at least the possibility that violations of that statute are per se negligent.

To be clear, I’m not saying that every time a car behind a dump truck suffers some damage, the dump truck driver or the company that owns the truck is responsible for it. Driving carries with it some risks that are not easily avoidable. If the dump truck kicks up a rock from the road and the rock chips a trailing car’s windshield, that’s just an accident, not negligence. But if a dump truck’s load isn’t properly secured and something falls out of the truck’s bed and hits a trailing car, the presence of an advisory and disclaimer doesn’t mean much.