It’s been another interesting week.

1. The lead story may be the filing of claims under the Racial Justice Act. When I wrote last week’s news roundup, five inmates had filed for relief. As of this writing, the number seems to be 147 (out of a total death row population of 159). Editorials pro and con abound.

2. The News and Observer has been running a series of articles critical of the SBI. The series is called Agents’ Secrets, and the whole thing, together with related editorials and other material, is available here.

3. A judge denied an MAR in which the state asked that the DWI cases that were dismissed in the Johnston County corruption scandal be reinstated. The News and Observer story is here.

4. Judge Jim Wynn has been confirmed to a seat on the Fourth Circuit and sworn in, eleven years after he was first nominated. That leaves an opening on the court of appeals, to be filled temporarily by appointment but up for election this fall. If there are three or more candidates  for the seat, there may be an “instant runoff” that is novel and intriguing, as described here.

5. Folks who are interested in the Fourth Amendment implications of GPS tracking devices — a group that includes me, see my paper on the subject here — will want to read the D.C. Circuit’s recent decision in United States v. Maynard. The court holds that “prolonged GPS monitoring defeats an expectation of privacy that our society recognizes as reasonable,” and is therefore a search, presumptively requiring a warrant. This is a controversial and significant conclusion, thoughtfully explained; for a critical review of the opinion, go here.

6. A few other stories that caught my eye: This one, about a woman sentenced to 21 years of house arrest; this one, about a man banished from Oklahoma as part of his sentence; and this one, about whether it is a mistake for a student to attend a highly-ranked law school where she may be in the middle of the pack instead of a less-prestigious school at which she is likely to be a standout.

7. Last, but by no means least, a question. Under G.S. 20-141.1, authorities may set special speed limits in school zones. The speed limits become effective when “signs are erected giving notice of the school zone” and certain other conditions are met. The picture below was taken recently in our own Guilford County. My question is, does it provide sufficient notice? Or does it mainly serve as an indicator that the painters were “too cool for shcool“? 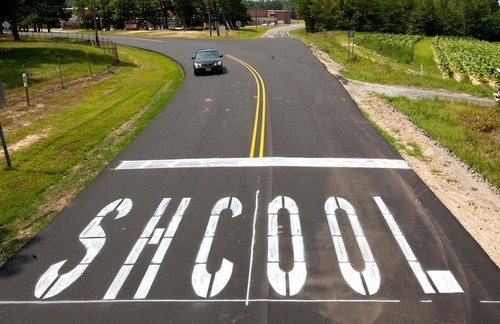