In Chapel Hill, the start of the John Edwards trial is big news. The News and Observer covers the beginning of jury selection here, and has an interesting story on Edwards’ increasingly isolated existence here. The only story that may be making a bigger splash is Jessie Smith’s contest, It’s a Crime What I Did to My NC Crimes, which offers a free copy of the new edition to the person who provides the most appalling photographic evidence of heinous abuse of the previous edition. Waive your right against self-incrimination and enter the contest here. It ends today, so don’t dither. And you need to do better than this, which looks to me to be among the most promising contenders (though I am not a judge): 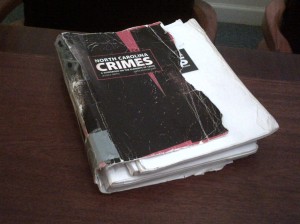