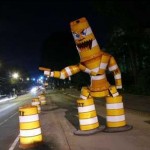 Update: The creator of the barrel monster has had his day in court, and appears to have received some sort of deferred prosecution, as reported here.

Original Post: My colleagues have contributed several great posts recently, and I have a couple more ready to go, but there have been several news stories over the past few days that I couldn’t resist highlighting.

First, as most of you know, the Administrative Office of the Courts is financially strapped. The News and Observer reports here that it is economizing on paperclips and such, reducing its expenditures on office supplies by over 75% in the last two months. Perhaps as a result, as reported here, the courts in Wake County are soliciting donations of office supplies from private law firms. The story concludes, “[n]o word on whether a bake sale could be next.” Wow!

Second, and on a cheerier note, the Washington Post reports here that violent crime rates are falling in major cities across America, debunking the popular view that a bad economy means an increase in crime. (Well, at least violent crime. The story doesn’t focus on property crimes, which seem like they might be more responsive to the economy.) Anyhow, apparently crime rates were low during the Great Depression. Anyone have any ideas about why?

Third, I posted here about the debate over child pornography sentencing. The public defender whose paper is at the center of the debate has written a reply to the Justice Department’s response. You can access the paper and the response through the original post, and you can read the reply here. You can read about another controversial child pornography sentence — for a former NPR reporter — here.

Fourth, the creator of the Barrel Monster– shown above — is due in Wake County court today. You can read about the case and the charges here. I hope I’m not diminishing the seriousness of the (alleged) offenses by saying how cool I think the Monster is and how much I’d like to have seen it in person.

Finally, there’s a new batch of Court of Appeals opinons out this morning. Jamie Markham is already working on a post about one of them, and I’ll try to highlight some of the others in the days to come. Stay tuned!