With that in mind, a new publication, the North Carolina Structured Sentencing Handbook with Felony and Misdemeanor Sentencing Grids, is available for purchase from the School of Government bookstore. It includes all the grids back to 1994, presented in a refreshed design and color scheme that we hope will be helpful. (I sent out a picture of the page proofs sitting on my kitchen table if you want to preview the new look.)

In addition to the grids themselves, the handbook includes instructions on how to use them. Here’s Step 1:

To the extent possible the instructions are presented in a quick-reference format suitable for use in court. For instance, the section on how to calculate a defendant’s prior record level includes this table of rules for what counts for points and what doesn’t.

The instructions also address other topics including:

In general the instructions follow the same step-by-step process used for many years by the North Carolina Sentencing and Policy Advisory Commission in its training and reference materials. Sentencing Commission staff kindly reviewed the new handbook, and I thank them for their expertise and advice. Thanks also to School of Government attorney Christopher Tyner for his review.

The School is selling the handbook for $18. The Administrative Office of the Courts purchased copies for superior and district court judges, appellate judges, district attorneys, and select AOC offices. Distribution of those copies will begin in February and should be complete by March. Please contact Joe Slate (919-890-1532) if you have questions about AOC distribution. The Office of Indigent Defense Services purchased 275 copies for felony public defenders and felony contract attorneys. Please contact IDS if you have questions about their distribution.

I welcome your thoughts on the content and format of the handbook. I intend to produce it as frequently as necessary to address subsequent changes to the law, and of course would like for it to be as user friendly as possible.

And I hope you like the colors we used for the grids, because they’ll also appear in another project that—after some technical delays—is about to finish up. 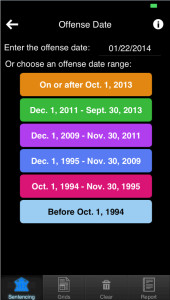 More on that soon…